News For Destroy All Humans! 2: Reprobed

Turn places like Albion, Solaris, and Bay City to dust when the remake launches on August 30th for PS5, Xbox Series X/S, and PC.

Call meteors down, bounce projectiles, summon a Burrow Beast to chomp down on enemies or reduce entire city blocks to rubble.

The collector's edition will come with an Arkwobbler statue, an official OST, multiple DLC packs, a hardcover artbook, and more.

The remake is due out for PlayStation 5, Xbox Series X/S, and PC sometime later this year, though details on it remain scant.

Black Forest Games says the PS5 and Xbox Series X/S will the new remake to "use up to 5 times more objects in the levels, making them more vivid, less empty, more believable, and more active."

THQ Nordic has confirmed in its digital showcase the remake of Destroy All Humans! 2 - Reprobed for all major platforms. 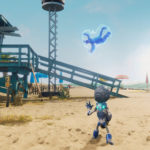 Black Forest Games and THQ Nordic seem to be at work on another Destroy All Humans! remake. 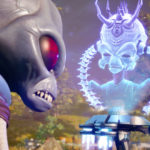 Destroy All Humans! Accolades/Sale Trailer Seems To Tease Next Title

A new bit of dialogue from Crypto seems to hint at things to come.