Five years after the fact… 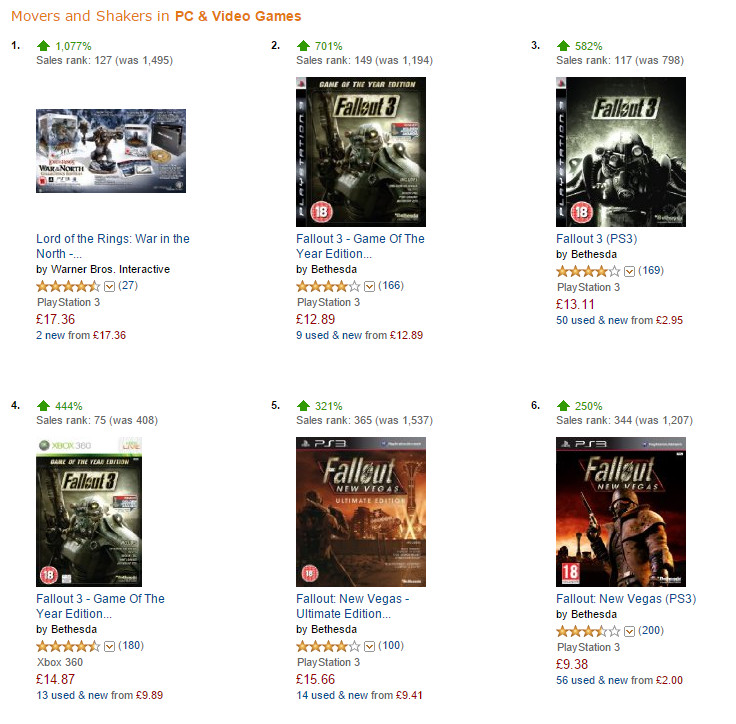 Fallout 4 was finally revealed yesterday, ending seven years of constant speculation and theorizing over when exactly the title would be revealed. It makes sense, too- Fallout is a series with a fiercely loyal fanbase, and the previous two games in the franchise sold 5 million units each, meaning there’s quite a lot of people who were clamoring for a new one.

But it seems all this hype got the attention of even those who had not played the series before. How do we know that? Well, because, as VideoGamer reports, sales of Fallout 3 and Fallout New Vegas have soared following yesterday’s reveal of Fallout 4, according to Amazon’s PC & Video Games Movers & Shakers chart.

Fallout 3 and Fallout 3: Game of the Year Edition surged to the top spots on the chart, with the PS3 versions taking up #2 and #3, and Xbox 360 #4. New Vegas followed on, taking the next few spots.

So, it sounds like, much like Skyrim, Fallout 4 will see an explosion in its mainstream popularity, and bring in loads of new fans and converts. The question is, will Fallout 4 be anywhere near as good?