This is one Ninja Turtles game that should stick to the shadows.

Combining comic book style cut-scenes with animation based poorly on the television series, Nickelodeon Teenage Mutant Ninja Turtles isn’t going to go down well with its fans. In what is essentially an extended cartoon involving the four green ninjas we all know and love, the problem here with this formula is that is delivers a terrible experience within that idea, and like all the other backlash of video games based on something of a different medium, it does more than good. If any good at all. The game brings in all the familiar characters such as Shredder, Splinter, April, and the turtles themselves. But the annoying character portrayal and down right awful dialogue doesn’t serve any justice whatsoever, to what is at its bare roots a great and lovable universe that everybody is familiar with.

Teenage Mutant Ninja Turtles plays as a 3D side-scrolling beat ’em up in which you are tasked with defeating waves of enemies at any given time. But the option to just float on by and skip through encounters is out of the question. Now while there’s nothing wrong with this in any and I mean ANY other game, in this game you wish it was an option. There’s nothing more frustrating in a game and fighting games in general, the when you are required to take on waves upon waves of generic and mediocre enemies that play just as bad as they look. It doesn’t help all too well when they’re glitched outside the boundaries of the screen, and you’re unable to attack due to the inability to press forward outside of the playable screen space until their defeat. 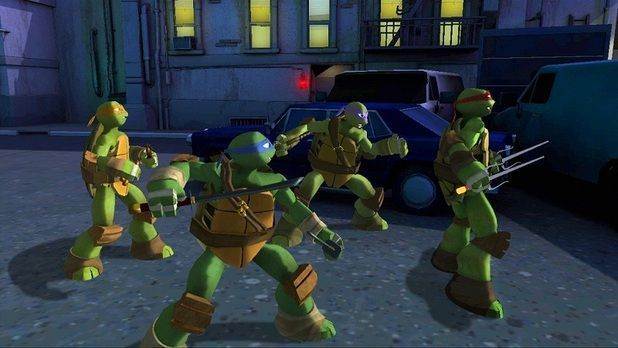 "Playing solo can leave this to be one of the worst games to ever experience. Can you say "Teenage Useless Suicide Turtles"?"

This ties in with the combat itself. The game places an illusion over your head that it’s a button-basher with specific combos in place given you input the right button combination. Illusion is key word here as the combat feels highly unresponsive at times and is far too basic in terms of its attacks. One of the most frustrating parts of the combat system is the fact that the turtles only initiate attacks when they’re in a given proximity of the opponent. This becomes a nuisance as the controls are unresponsive and the enemy types which you fight, dodge and move around very quickly. It doesn’t help much either when the other three members of the group are standing in your way like overgrown mannequins.

Even though the game focuses on four-player gameplay, locally or online, the useless A.I. don’t do a good enough job to make up for the human counterparts. The non-playable turtles are essentially shadows of the one you control and nine times out of ten will stand there refusing to fight. It’s as if they’re waiting for you to take control and will risk death even doing so. Playing solo can leave this to be one of the worst games to ever experience. Can you say “Teenage Useless Suicide Turtles”?

Boss battles don’t do much to standout neither. They feel like an introduction for a new enemy type that you’re likely to fight again. Aside from the exception of the giant fish with robotic legs. That’s right, a fish with robotic legs….only in the Ninja Turtles will you find this and as humorous as it is, it’s not long till the next flaw pops up in order to ruin one of the only few good experiences. Enemy bosses follow the outdated tradition of fighting in a routine, by which you spent most of the time evading, only attacking once the enemy has tired themselves out. As enemies don’t give any real feedback when they’re being attacked other than a decreasing health bar, battles can become mentally exhausting, and very quickly.

Despite actually implementing an upgrade system its actual use-case is about as helpful as taking advice from a color blind interior decorator. Minimal explanation, no real proof of purchase in battle, and an un-polished, non fully-fledged sequence of combat animations prove there is no real benefit from wasting your time in even going to this menu. The game treats itself and the player as a requirement rather than something to enjoy and bring entertainment. 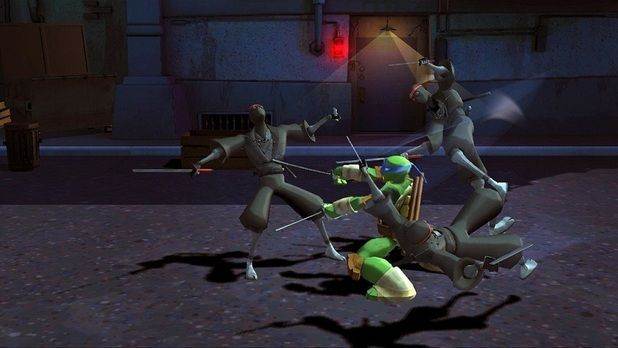 "The game manages to capture the youthful and playful traits of Nickelodeon's spin on the Ninja Turtle franchise, But the terrible gameplay elements particularly the combat quickly cause what little enjoyment you have to fall flat."

A unique feature in the combat department is the ability to throw stunned enemies towards the player. Having the enemies crash against your screen and slide down it in a cartoonish nature is both entertaining and fun to pull off, it never gets old. This is probably the only entertaining and worthy feature that exists within the enemy encounters, but it”s far from enough to justify combat that feels like a chore.

After each level of the game is complete it brings you to an old-school arcade scoring system by letting you type in a three letter name for your leader board. It was nice to see this and goes along with the overall feel sense of false nostalgia. I say false nostalgia due to the poor gameplay design but excitement of seeing fictional characters that I grew up watching as a child on the television. The 90s will always hit you when you see the Ninja Turtles, it’s just a shame that this game hits harder at being a total screw up.

Each character has their own distinct personality. Raphael is brash, Donatello is the brains of the bunch, Michelangelo is vein and in his own words “Awesomeness”, and Leonardo is sensible yet childish. The game manages to capture the youthful and playful traits of Nickelodeon’s spin on the Ninja Turtle franchise, But the terrible gameplay elements particularly the combat quickly cause what little enjoyment you have to fall flat. 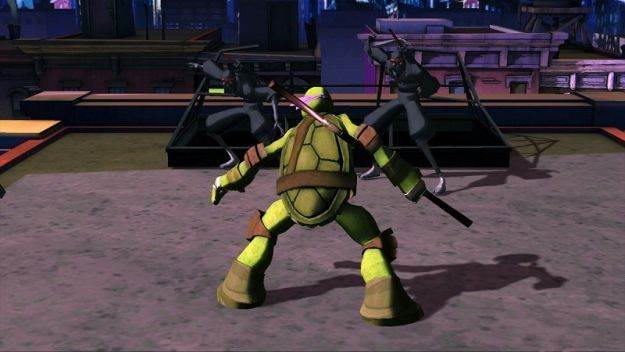 "The game has a unique cartoonish visual style that tries to replicate the TV series in which it roots from. Trying is the keyword here, while the game isn't ugly it's not exactly pretty. Crammed with jaggies, bad character models, and a mucky palette of colours it doesn't look all to appealing, it's a dinner plate of disaster."

Something that didn’t make any bit of sense was the turtle’s direct conversation with the player when ever I switched to another character. It just didn’t make sense as to why they where interacting with the fourth wall. Do they know they’re in a game? Why did they say “see ya later” and  “my swords are at your ready” Although it didn’t make sense and was at one point disturbing I realized it was trying to carry a sense of comedy. But the fact that it doesn’t fit within its universe and has been used by a similar although much more satisfying game this year by the name of Deadpool, just made this interaction come off as pathetic. But hey if I wasn’t questioning the enemy robots sliding down the side of my TV screen, I wasn’t going to question them.

The game has a unique cartoonish visual style that tries to replicate the TV series in which it roots from. Trying is the keyword here, while the game isn’t ugly it’s not exactly pretty. Crammed with jaggies, bad character models, and a mucky palette of colours it doesn’t look all to appealing, it’s a dinner plate of disaster. There’s nothing in this game visually that doesn’t prove it couldn’t have been done on much older systems. Previous games in the Ninja Turtles universe that where present in the PlayStation 2 era are both superior in gameplay aswell as visuals.

Grimey sewers, dimly lit subways, and the dark atmosphere of the New York City streets all attempt to stay true to the ninja turtles universe. This theme is carried through all aspects of the game right on into the characters themselves. The game is clearly going for authenticity here but it fails greatly in its execution. It’s as if you can almost see what an amazing game this could have been had it been created by a different group of people.

The nostalgia of other things that existed in that time of me growing up watching these hard-bodied heroes, is the only joy I received from this playing this game. Long Live the 90s!

I realize it may not be fair to say everything is all gloom and terrible here. But it may be a lie if I didn't.

A basic combat system that fails at being basic and and unmotivated reason for playing, makes this game feel like a bad favor that you owe to a friend. The best thing this game could do is to stay in its shell and don't ever come back out.

A copy of this game was provided by developer/publisher for review purposes. Click here to know more about our Reviews Policy.
Tagged With: 3DS, activision, Nickelodeon Teenage Mutant Ninja Turtles, wii u, xbox 360