The fundamental question one must ask when one buys Pokemon Art Academy is, is it even a video game? And that would be a very good question- though it features characters from Nintendo’s popular Pokemon franchise, and definitely features some gamey elements, it is very hard to shake off the feeling that this is essentially a very full featured and powerful drawing and editing suite wrapped up in a Pokemon skin to appeal to an audience that otherwise wouldn’t be interested in coughing up the cash for what is basically a drawing instruction software.

And while that sentiment would be right, there is something curiously alluring about Pokemon Art Academy- something that transcends just the charm of seeing a little Pikachu that you drew up yourself come to life on the screen, something that somehow makes you feel empowered as you draw away some extremely detailed and intricate images, using a very powerful suite of image editing tools. In the supreme irony, the Nintendo 3DS, which is hardware that has often felt to directly hinder and contradict the nevertheless amazing variety of games that are available on it, seems to enable Pokemon Art Academy, which is essentially a non-game, a lot. And in so doing, it ends up creating a software package that may not be a game in a traditional sense, but is ultimately very highly recommended for people with any interest in drawing and image editing, or for enterprising young artists, who will find learning to draw their favorite Pokemon a good enough guise to actually learn the ropes of something a whole lot more complicated. "It ends up creating a software package that may not be a game in a traditional sense, but is ultimately very highly recommended for people with any interest in drawing and image editing, or for enterprising young artists, who will find learning to draw their favorite Pokemon a good enough guise to actually learn the ropes of something a whole lot more complicated."

The central conceit of Pokemon Art Academy (yes, there is actually a story- Nintendo, who often skimp out on giving us a proper scenario in so many of their games, such as Mario or Smash Bros., have, in their supreme wisdom, saw it fit to give us context in an image editing tool) is that you are a young, budding illustrator for Pokemon cards, and you need to undergo some training before you are proficient enough to be handed the reins to draw everyone’s favorite Pocket Monsters for the world’s most popular trading card game. It’s actually a fairly reasonable setup, and certainly, for younger kids and/or people who may have picked this up expecting a more traditional video game, it’ll help to maintain some form of grounding.

As you go through the lessons, more and more tools and techniques are unlocked, until by the end, you wield all manner of colors, shaders, pencils, markers, erasers, layers that can be freely moved and edited, Undo techniques, and so on. Indeed, by the end, it becomes abundantly clear that this is a very powerful image editing and creation software- and therein may lie its value, more than its value as a game.

Of course, any imaging software needs the proper hardware to support it. For instance, there is a reason why no self-respecting artist will be seen using an iPad, or indeed, any modern smartphone or tablet, for their image editing, and will instead resort to specialized products. You see, capacitive touch screens, like the one found on most modern devices, may be convenient for the kind of usage that a smart-device demands, but are extremely imprecise (and hence, unsuited to applications that require precision- such as artistry or, yes, gaming). The 3DS, meanwhile, features a resistive touch screen- these aren’t as sophisticated as a capacitive touch screen, but they are highly accurate. And this is what ultimately helps Pokemon Art Academy so much- the 3DS’s resistive touch screen means that players and artists get just the kind of accuracy that software like this ultimately demands.

As accomplished as Pokemon Art Academy is at what it does, however, it’s not without its faults- indeed, there are a fair few of them, but the most important one has to do with its progression. You see, as you go through the main ‘story’ tutorials, you unlock more and more tools and techniques; however, it is impossible to skip through any tutorial from a basic stage and just try doing a more advanced one. You have to sit through every lesson (most of the times giving you a different Pokemon to draw- gotta sketch ’em all), no matter what your skill level may be. It’s easy to see why Nintendo did this- such gated and guided progression is the easiest way to ensure kids get better in incremental steps, instead of just jumping to the last level, finding themselves hopelessly outmatched, and giving up, discouraged. There is also an argument to be made that those people who are good at drawing anyway will probably make short work of the earlier scenarios in just a couple of hours. And that is all true, but still just offering an option (maybe having it hidden in an Options Menu) wouldn’t have hurt here. 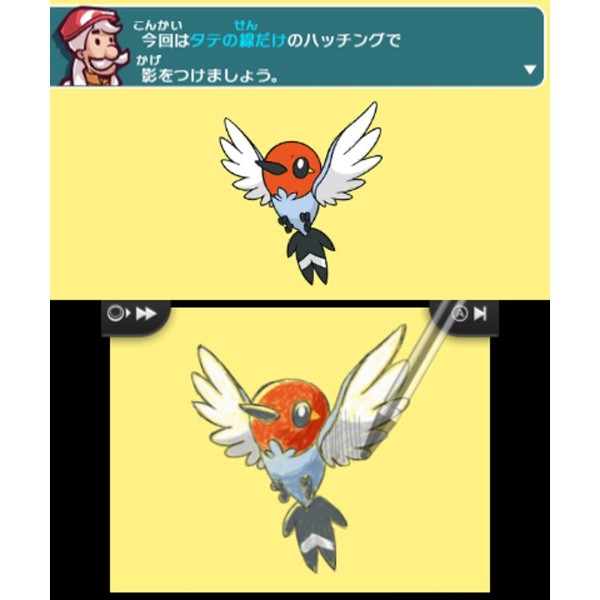 "As accomplished as Pokemon Art Academy is at what it does, however, it's not without its faults."

All this said, there are two other modes that Art Academy ultimately offers to you- Free Draw Mode, which is exactly what the name implies, letting you draw any Pokemon with any tools at your disposal, as you may see fit. This mode supports preset pictures, pictures taken using the camera (which are then put on the top screen for you to refer to), and finally, just plain giving you a blank canvas. This is basically the ‘real’ mode of the ‘game,’ where everything that you learned in the lessons is put to some good use. If Pokemon Art Academy were an RTS, the Free Draw Mode would be the Random Map/Skirmish mode to the main lessons’ Campaign Mode. All your work is shareable either on Miiverse, or can be saved on to your SD card, so Art Academy definitely has some merits as real, image editing software here.

The final mode is a Quick Draw mode, which basically lets you draw up a quick sketch. It’s actually pretty darn awesome to see some hasty scribbles shaping up into a recognizable shape like a Pikachu or an Eevee, and it gives Quick Draw mode a charm all of its own.

Ultimately, Pokemon Art Academy is surprisingly nuanced. It’s barely a game, that’s true, but it’s a powerful piece of image editing software, and it should certainly appeal to both, people who are already at an advanced stage of artistry and drawing, as well as young Pokemon fans just looking to get into making rough sketches.

Powerful suite of image editing software, but accessible and easy enough that even little kids can get comfortable with it in a matter of hours; oodles of charm; loads of sharing and saving options

This is barely a game; the gated progression of the lessons can be a bit off putting to the more advanced 'players.'

Pokemon Art Academy is a surprisingly powerful piece of image editing software that should appeal to young novices and more experienced artists alike.

A copy of this game was provided by developer/publisher for review purposes. Click here to know more about our Reviews Policy.
Tagged With: Nintendo, Nintendo 3DS, pokemon art academy