Primal Carnage: Extinction Wiki – Everything you need to know about the game

Everything you need to know about Primal Carnage: Extinction.

Primal Carnage: Extinction is a class based online multiplayer shooter that was released as a sequel to the original game, Primal Carnage.

The original game in the series was developed by Pub Games but the primary development of Primal Carnage: Extinction is under Circle 5 Studios, a new indie team. Circle 5 Studios now own the rights to the Primal Carnage brand and have taken over the work of Lukewarm Media. Pub Games involvement in the game’s development, though still existing, is in an unknown capacity.

At this time, the game is currently available on Steam Early Access where it launched on December 3rd 2014. It was also slated to be released in Q1 2015 on the PlayStation 4.

The development of Primal Carnage: Extinction is strange in the sense that it has seen developers come and go as well as having the rights to the game exchange hands. When Primal Carnage first launched on Steam, it was largely received with a distinct lack of interest and a wave of complaints from gamers. The game was originally said to have been riddled with bugs that were eventually, for the most part, fixed with patches.

With that in mind, it was decided that the game should receive a massive recode, reworking the game from the ground up and effectively rebuilding the very core of its gameplay systems. Pub Games came in to work on this rebuild, but not too long after a number of the previous developers abandoned the project, including Lukewarm Media’s co-founder Ashton Anderson.

Version 2.0 of the game was eventually scrapped entirely and instead replaced with a new build that would serve as a sequel to Primal Carnage. This was revealed on October 27th 2014 as Primal Carnage: Extinction. Understandably, the news was met with some confusion from gamers who were simply expecting a large patch or update. Instead, the Extinction game was released a mere two months later on December 3rd 2014.

A common complaint is that the current build of extinction is still buggy. One reviewer has written, “What started out as a recode to fix the increasing issues of the original PC became a whole new game all together that changed eveything about it. What was once a well balanced and competitive game that I spent over a 1000 hours playing turned into a buggy mess and now in the latest incarnation has completely wiped out the balance and competitiveness of the game and turned it into a loot generator.”

Speaking about the game’s appearance on the PS4 at 1080p at 60fps, Aaron Pollack from Circle5 Studios has told GamingBolt, “Well, UE3 doesn’t officially support PS4 so we’ve been working this build off of some of the work by the now defunct Zombie studios who have done a stellar job of getting PS4 support into the engine. To get this playing well we’ve also made a lot of optimisations under the hood and we’ve allowed the PS4 to push our game to the highest quality textures, shader quality and post processing.

“We’re running at 1080p and are aiming for a solid 60fps frame rate. The biggest challenges so far have been that Unreal 3 wasn’t made for PS4 so there’s been a lot going on engine-wise to get things running so that we can support PC players and PS4 players with the same level of quality. It’s important that games have a stable, high frame rate so that gameplay appears smooth. Achieving a high framerate is really important to create a great user experience, and developers have to make trade-offs to achieve good looking games…” 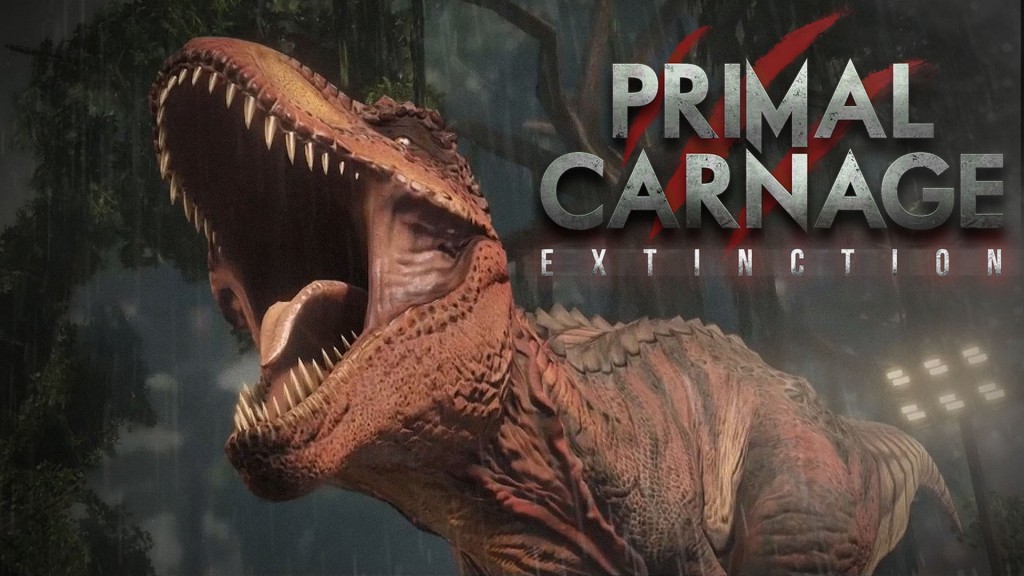 Primal Carnage: Extinction features a series of multiplayer-driven events such as objective based missions rather than a typical narrative-based campaign. 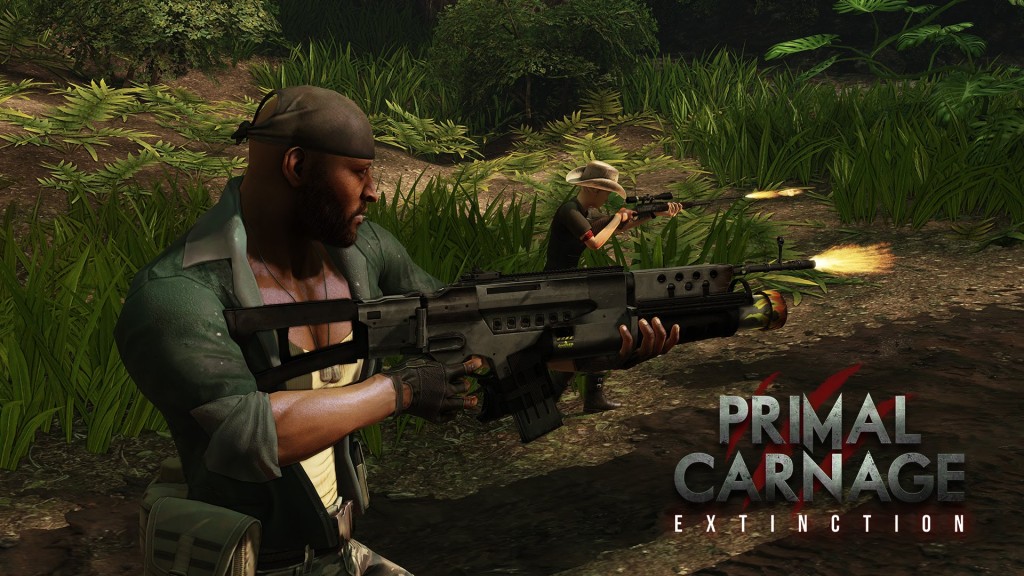 Primal Carnage: Extinction is first person multiplayer shooter that is made different and interesting by the inclusion of player controlled Dinosaurs.

The player classes are what lend the game a sense of depth. It is how they are different from each other and how they function that makes them the core of the gameplay.

The game currently supports two gameplay modes. One of these modes is a typical team death match styled mode where players divide into teams and duke it out until the match ends. The team with the highest overall score is declared the victor. The second game mode is Get to the Chopper that is an objective based gameplay mode. 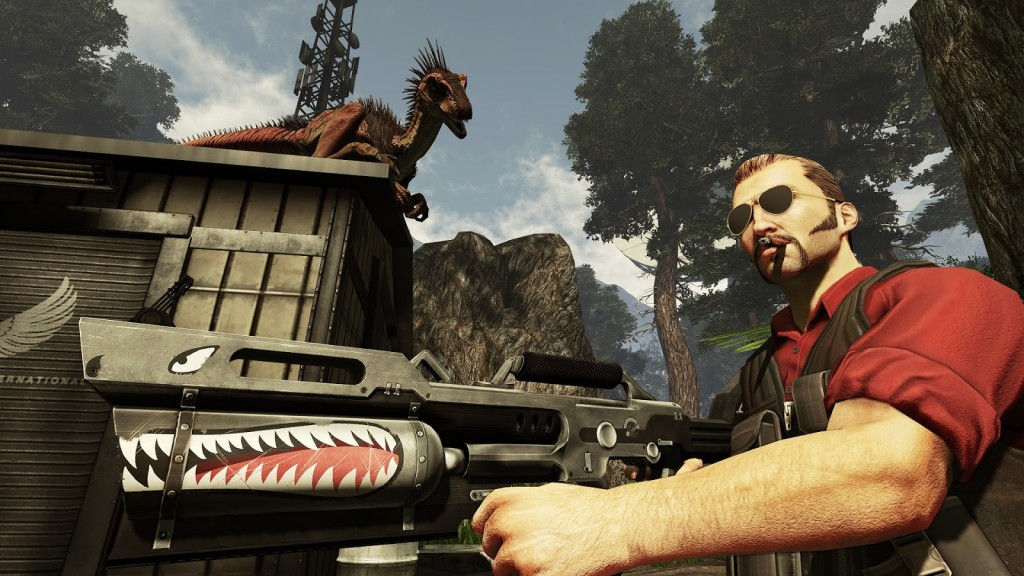 Primal Carnage: Extinction sports a variety of gameplay classes that enable the player to counter the natural talents and strengths of the dinosaur opponents. These classes are:

The Scientist (Sniper) – The Scientist fulfills the role of the game’s dedicated ranger soldier unit. The character description reads “An expert marksman, Moria prefers to approach problems from a distance”. The advantages of the sniper is that your rifle deals a tremendous amount of damage, but packs low amounts of ammo and suffers long reload times.

Despite being a ranged specialist, the sniper can be useful up close with the tranquilizer gun. Using it tactfully can slow down even the largest opponent and strip their stamina away. The scientist can also deploy health kits.

The Commando (Assault) – The Commando is the dedicated assault trooper. The character description reads “A military veteran, Marcus is adept at unleashing a hailstorm of lead upon his foes”. The Commando comes armed with an assault rifle that can deal decent amounts of damage and has a moderately high rate of fire. The weapon comes with a grenade launcher that can be used to deal high damage to a single target or to damage groups of foes. The Commando also packs a pistol as a secondary firearm. He can also deploy ammunition boxes to supply team members with restocks.

The Trapper (Hunter) – The Trapper, as the name would imply, uses his secondary weapon to trap dinosaurs, making them easy pickings for the rest of the team. The character description reads “Jackson, a big game hunter, is here to claim the ultimate trophy with traps and dual pistols”.

His primary weapon is actually a set of two heavy hitting revolver pistols that are accurate out to a medium range and can deal an impressive amount of damage if used properly by balancing controlled shots with measured accuracy. The Trapper’s piece of equipment comes in the form of an IFF land mine. This will not detonate if you or a team-mates step on it – rather it will only go off if a dinosaur steps on it. If you’re in the radius of the blast, you and team-mates can be injured.

The Pathfinder (Scout) – The Pathfinder, like the Trapper has an implied name: he forges forward and finds the path for the rest of the team. Armed with a shotgun, he can most often fend off the faster and weaker dinosaurs single-handedly. The character description reads “A survival expert, Joseph specializes in close-range combat”. Naturally, at a range the shotgun doesn’t deal damage but it does sport an impressive reload speed.

This allows the Pathfinder to put damage down whilst staying prepared. The secondary weapon, a pistol, can be used to deal damage out to a medium range as long as the player maintains accurate control of the weapon. The Pathfinder can also deploy a flare that can blind opponents but light up areas for team mates. The flare can be used passively as a tool or tactically as a means of advance and retreat.

The Pyro (Support)– The Pyro trooper, is the game’s support and control class. Using a flamethrower to lock down areas with gouts of fire, or to deal damage fast in close quarters, the Pyro is an essential part of any team. The flamethrower can be used to intimidate enemies as well if used properly. The Pyro operates in a close proximity to the targets and uses a chainsaw for defense up close, which can deal heavy damage.