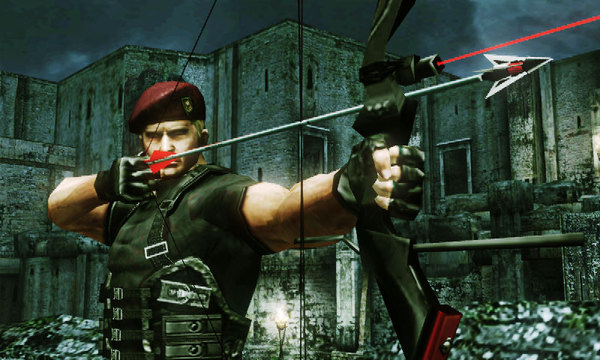 Upon starting up Resident Evil: The Mercenaries for the Nintendo 3Ds, I was excited to see a title that was filled with action and zombies, however I did not expect it to be exactly the Mercenaries game mode from Resident Evil 5 without any significant additions.  It is essentially a part of another game and while I might have enjoyed it more than that Cats and Dogs for the 3DS, I expected more from the game.  Anyone who is familiar with the mode from Resident Evil 5 will know that you must kill as many zombies as possible while staying alive to complete the mission.  More zombies killed means a higher rating, while killing zombies with finishing moves or keeping a chain up will also grant you a better rating.  It is not like the game is not fun but it is not something you can dive into and can play for hours on end like other handheld games.  There are only 6 levels to choose from with stages within them and as petty as it may sound you will have to back out and choose the next level manually rather than the game advancing itself for you.

You will eventually be able to choose between 8 different characters with each having an alternative costume.  With no story mode, the game solely consists of killing zombies as quickly as possible, so it would have been nice to have some more features. However, having the bottom screen to choose between weapons, I have to say, was convenient and easy to access when you are being over run buy zombies.  As usual each character has a specific set of weapons and you wont have to do any herb mixing either as each green herb collected is automatically converted into a health spray.  Capcom certainly made it convenient to play on the 3DS, with the controls flowing well but I am afraid that alone does not deserve itself a full retail release.  With Resident Evil: Revelations releasing soon, which will be more of a classic Resident Evil title, I don’t see why this could not have been included with that. 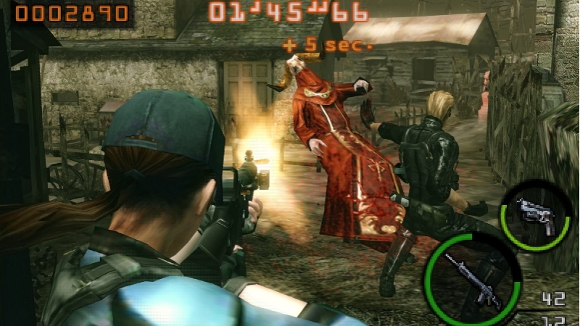 Time is your real enemy

Aside from the gameplay, the graphics are very impressive and it was nice getting to see Resident Evil in 3D.  Familiar maps from Resident Evil 4 and 5 are in the game as well as those titles in the Mercenaries mod when it was first released.  The gameplay is definitely very good and you can even move while aiming now (finally), but you might be surprised how much you don’t take advantage of the added feature.  There are also a ton of unlockables aside from characters and costumes as each character has three slots for skills that you can insert into.  Some skills like ‘Medic’ which improves how much your healed from a spray can to ‘Luck’ which increases resistance to instant kills just to name a couple with others like Revenge, Maximizer, Landing, Adrenaline among others which upgrade to be more effective upon the use of them.  There are also 50 medals you can obtain which are just for show, obviously an effort to add more to the game, like one medal that requires you to play all missions twice with the rest of them requiring tasks slightly less tedious for the most part but proves a challenge.

The game itself has a file which cannot be deleted from the 3DS while Capcom and Nintendo have tried to create a work around, it is not so easy to just restart you game if you get bored (Delete save from 3DS work around). One neat new feature is that instead of unlocking the weapons for each character you can also use Nintendo play coins to customize as well as unlock characters weapons which is a big part of what will get you using different character.  One nice feature that Mercenaries has is the fact that you can play most levels with another player.  Local co-op will require you to being playing along side with another person that has a 3DS as well as their own copy of the game which would have been nice to let the second player play with out a second cartridge.  Internet play is also available which works fine but again not all missions can be played with another player.  The internet play will require a good wi-fi connection. 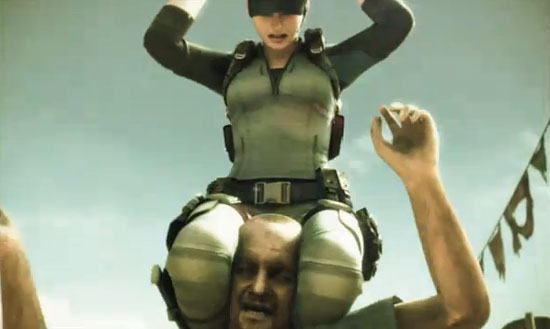 Bonus when you know how to finish them

Resident Evil: The Mercenaries is not a bad game at all.  The fact is that the Mercenaries mode seen in previous game was a bonus add-on.  So for a full release of this add-on just cuts it to close to make it a worth while full blown retail game.  If you have money to burn, it is nice to see the Resident Evil franchise in 3D but it is not worth $40.00 and you might want to wait for the more traditional Resident Evil: Revelations soon to be out for the 3DS.  There is even a preview/demo you can play of Revelations on the Mercenaries cartridge that looks quite impressive, short as it may be.  So as fun as Mercenaries is, its limitations prevent it from being a full retail price gime, but down the road you might want to pick it up once discounted.

Resident Evil in 3D for the first time. Familiar mode with flowing gameplay mechanics. Unlockables along with 50 medals and co-op play via internet as well as local.

The game is a bonus add-on from other retail Resident Evil games and the 3DS game has not done much to change that. More unlocks, characters, weapons could have at the least been added to change it up a bit.

Resident Evil Mercenaries is nothing new as is visits areas from the 4th and 5th game while you must fend off as many zombies you can in the allotted time while staying alive.