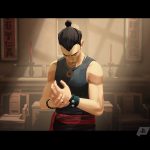 Players will have multiple chances to resurrect on death but age each time, gaining more damage and unlocking new skills but having less health.

The new trailer highlights all of the essentials of combat, from parrying and dodging to breaking an opponent's balance and Focus attacks.

SloClap's action title is currently scheduled for a launch on PS5, PS4, and PC some time in 2022, following a recent delay.

Sifu Gets More Details On Aging Mechanic And Recent Delay

The ambitious action title will allow you to age with each death, up until a point where you restart. Its new 2022 date was largely due to COVID issues.

Sifu receives another gameplay trailer showcasing the aging mechanic as well as incredible combat moves, with a new release window of early 2022.

Pull foes into each other, slide and trip them, and retaliate with powerful techniques in the upcoming action fighter from SloClap.

Additionally, the clip also confirms that SloClap's upcoming action brawler will let players choose the gender of the protagonist.

Slocap's Sifu is scheduled to release on PlayStation 4, PlayStation 5, and PC via the Epic Games Store later on this year.

Sifu is Getting a New Gameplay Video Soon

Look for vengeance in the upcoming kung fu combat game.

Learn the way of martial arts as you die, age and fight once again.