10 Most Acrobatic Characters In Video Games 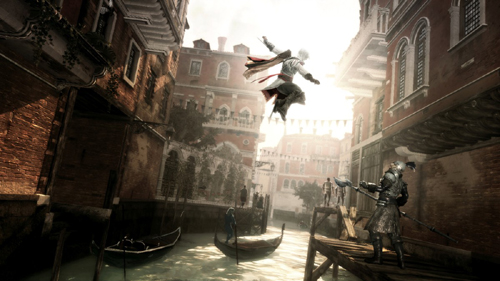 It’s always great to see video game characters running vertically upwards on walls that seem unscalable at first site, or jumping from rooftop to rooftop, or killing enemies with the help of crazy, unmatchable agility. We at GamingBolt have written this article as an ode, you might say, to these acrobatic video gaming figures who have made us fantasize about running up walls so many times before… some of us have even broken a bone or two thanks to them.

10. Kratos (The God of War Franchise)

Kratos jumps from one crumbling 100 feet tall pillar to another like it. He rolls across ground that will have spikes piercing its surface any second. He jumps from an aloft Pegasus to another airborne creature, throws the bad guy atop it down towards earth, tears the creature’s wings apart and throws it downwards too, and then jumps back onto his own Pegasus. Only a really, really acrobatic guy is capable of doing that. And that is why he is here.

This chick can kick, jump, punch, swipe and shoot, all at the same time, and she can use her feet for that as well, if not better, as she does her hands. Trust me, she’s really acrobatic. If you haven’t already played the game and don’t know this by personal experience, then I suggest you check out the video above. Well, you should do that anyway.

8. Dante (The Devil May Cry Series)

Have a look at that video above, it’s the TGS 2010 trailer of the recently announced reboot of the Devil May Cry series, titled simply DmC. I know you guys hate how the new Dante looks, all emo and gay, I do too. But man, look how agile and swift this guy is. He killed all those enemies in the video above in a matter of a few seconds, and oh bloody hell, the moves he showed off were awesome. If only Dante keeps pulling off such stylish and acrobatic moves throughout the upcoming game, I won’t care how he looks.

Wow, this guy can run up entire sly-scrapers in a matter of a few seconds! He can jump, and he can run damn fast. If he’s not acrobatic, then I don’t know who is. Chuck Norris, maybe. But if you do disagree with Mr. Mercer being on this list, you can… well, disagree.