A Game of Thrones: Genesis Review

Like many others, I was introduced to the “A Song of Fire and Ice” universe with the recent HBO series “A Game of Thrones.” The plot, setting, and characters all spoke to me and I instantly fell in love with the series, purchasing the novels (Only the second book series I’ve ever read) and studying up on the lore of Westeros. When I heard that a video game based on the setting was going to be released, I knew I had to have it at any cost. Early screenshots had me excited – after all, I love strategy games, but the more I saw, the more worried I became that this title would not live up to my expectations. Well, I’ve played through the game and I’ll tell you what I’ve found.

First and foremost, let me get this out of the way: The graphics suck. This is about what I’d expect out of your average developer… back in the PS1 era. Usually, I don’t really care about graphics, and they certainly don’t get in the way of gameplay as mostly everything is discernible. Regardless, we are standing at the dawn of the eighth generation of console gaming, and this looks like a textbook example of what to expect from the year 1996. Something even a little bit more modern could not have hurt. On the plus side, many of you won’t have to worry about whether your PC will be able to handle the game or not. Anything running windows XP should be sufficient enough to run it, unless, of course, your computer is too good. The PC I tested this on is a custom built machine that I put together August last year sporting a Radeon 5830. I had no trouble playing the game, and played it at 1600 x 900 resolution but I have seen reports of people with even better specs, trying to play their game on higher resolutions unable to get past the opening cutscene due to freezing issues. Cyanide claims the latest patch should have fixed that and there are ways to circumvent the problem, but be aware that you may encounter this problem if you have an awesome gaming rig.

Now that that’s out of the way, let’s move onto the heart of the game – gameplay. Starting it up and not knowing what to expect aside from a strategy game, I went into the tutorial. There I was greeted by a very small map littered with buildings. Some were controlled by the Targaryens, and others were controlled by the Lannisters. “Awesome!” I thought. “This must be my starting base since the Lannisters and Targaryens were friends!” Wrong. That was the whole of the map and I had the enemy on my doorstep. Running through the tutorial I got a real taste for what I was in for with the game and as much as I was becoming worried that this game would be a little too complex with a little too much to keep track of, I was getting rather excited. The developers were clearly fans of the series and thought of every little nuance that you see throughout the novels and translated it to game form. (The part about your great lord being unmarried will produce bastards that you have to hide from the enemy was inadvertently funny.) I left the tutorial psyched and looking forward to the possibilities that this game would present and started campaign mode. 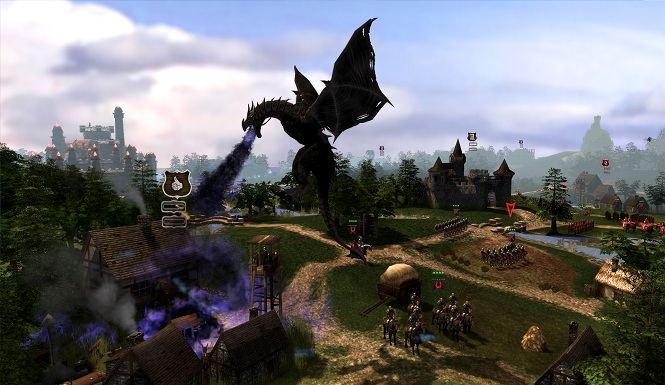 Although each of the houses are generally similar, there are a few perks.

For those of you who follow the story, campaign mode starts roughly 1,200 years before the events that happen in the novel “A Game of Thrones” and go right up to a few hundred years before the start of the novels.. I was treated to voice acting that was neither exceptional nor terrible and the first chapter of the campaign was like a second tutorial for those who are a little too eager to start playing. Regardless, the refresher was nice and helped me ease my way into the game. The first mission even borrowed an exact map of the area immediately around King’s Landing which was awesome. Unfortunately, the levels that followed were all very generic locations and equally small maps. The game play was also nothing near what you would expect in your standard strategy game.

In most strategy games, the goal is to build up your home base, amass a gigantic army, and destroy the enemy base. Resource management is pivotal to all strategy games, and while AGoT:G continues to rely on resource management, the subjugation of your enemy takes a back seat. In this game you are encouraged to win through diplomacy, forming alliances, and breaking them. Often your envoys and assassins will do more work than all of your armies. In fact, games can be won without ever having to raise a single army unit and oddly enough seems to be the most effective approach. Rather than marching for the enemy base, the game centers around capturing nodes scattered across the map. This is easier said than done however, as the dance between envoy, spy, noble lady, guardsmen, and assassins may see towns and castles switching hands often, or in secret. Perhaps the best aspect of this game are the creative ways development found to hide various board states. An enemy spy may have infiltrated your castle and become an envoy making false peace agreements and you will never know it unless you have your own spy specifically check that envoy. Towns may seemingly be giving you revenue, but in actuality, you are getting nothing from those towns all while the enemy is reaping all of the rewards. You may hire an assassin who was secretly an enemy spy, and when he tries to kill an opponent’s unit, the unit will seemingly die, only to reappear 30 seconds later. If you weren’t careful in checking the board state, this fact may completely escape your notice. As a huge fan of political intrigue, this is the closest I’ve come to experiencing anything close to the sort.

Sometimes throughout the course of the game, your underhanded tactics may go too far and war will be declared. During this time, most diplomatic measures are completely ineffectual, and you will have to rely on the strength of your army. Unit combat isn’t as fast or enjoyable as games such as Starcraft, and while I did find it entertaining to send my army to my enemy’s towns, it wasn’t as fun or satisfying as the political game. Unfortunately, the enemy AI in this game isn’t the greatest, and whether you’re at war or trying to politically undermine each other, the AI’s tactics are relatively predictable. Taking the time to properly safeguard your assets and employ counter techniques can easily lead to victory. This also, unfortunately leads to monotonous gameplay over time. 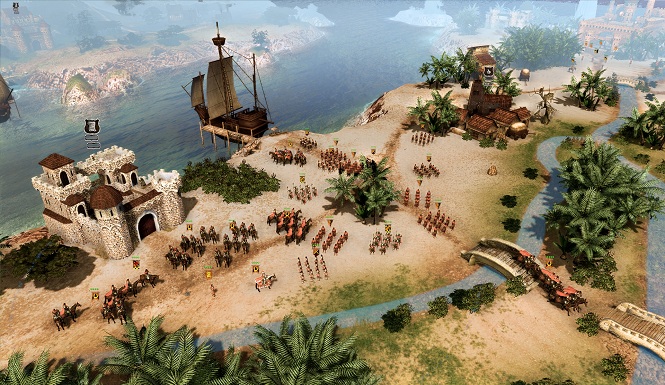 You will rarely need to amass an army this big to conquer Westeros.

The real fun in this game is in its multi-player. When going up against real, human intelligence, you have to be everywhere at once, anticipate your opponent’s moves, and really apply yourself to a battle of wits if you are to prevail over your opponent. This game is extremely skill intensive, and really challenges the intellect and foresight of both players in a way few other games I’ve played have. Sure, Starcraft and its ilk may demand a very high level of competence, but most of those games are reactionary and very rarely challenges you mentally like AGoT:G does on a consistent basis. On the down side, the unpopularity of this game has made finding opponents difficult. I’m hoping to convince some of my other friends to pick up this game once there is a sale, but there’s no telling when that will be.

Unfortunately, unless you live in Europe or Australia, the only way to obtain this game is through Steam. Even then, regardless of whether you bought the disk or not you will need a Steam account and an internet connection in order to play. This pretty much ensures the only way the game will ever see a price drop in America is through a Steam sale, and at $40 this might be a hard sell to your friends. Indeed, the game is fun, but given the niche game play and lacking presentation, I can’t recommend it at that price. Unless you are a big fan of the political side of strategy games and a fan of George R. R. Martin’s universe this game sadly might not be for you. Without a lot of action, and a shallow community of supporters, this will fall flat with general audiences. If there is one shining hope, it’s that the developers are very passionate about improving their game and speak directly with their fans on the forums – something that many other larger game companies fail to do. These aren’t representatives or PR agencies, but the actual developers who coded and continue to code the game’s patches. With regular upgrades, this just may become something even better in the future. For now, I would value the game at around $15, and encourage anyone remotely into strategy games to pick it up if Steam ever has a sale at that price.

The political aspect of the game is refreshing in a genre full of Zerg rushes and military buildup.

The war time aspect of the game is lacking – if it ever even gets to that point. Graphics are straight from 1996.

Final Verdict:
FAIR
A Game of Thrones: Genesis brings us into the world of “A Song of Fire and Ice” with a strategy game that is dependent both upon military might and political maneuvering.
A copy of this game was provided by Developer/Publisher/Distributor/PR Agency for review purposes. Click here to know more about our Reviews Policy.