Ace Combat was one video game series I always wanted to get into, but never had the skill required to. Every attempt at picking up the controller had me crashing into the ground by one factor or another. It wasn’t that I was bad at aerial combat games – indeed; I had played and excelled at many. The genre gave me a rush that no other genre could quite scratch, and Ace Combat had seemingly stood at the top of the aerial combat pyramid; the pinnacle upon which all aspiring dog fighters reached for, but few were chosen. Chosen, I certainly wasn’t. The controls were realistic to the point of difficulty, and what little fun I squeezed out of the titles was drowned out by my own inability to control my plane. Perhaps one day in the future I will go back and play more than demos to conquer the series, but for now let’s talk about the first Ace Combat game in which I am proud to say I did not eat dirt: Ace Combat Assault Horizon.

If you are like me and found the point of entry of the Ace Combat series a little too high, you’ll be glad to know that the developers tinkered with the controls to make their game more of a game, and less of a simulation. If you know the basics of how a plane works, the controls will all feel fairly intuitive and for those of you who are used to Ace Combat’s old, more realistic controls you can change the control scheme to match it. Even beginners will understand the controls and be able to successfully navigate the battlefield after just the first mission. Don’t get me wrong, by no means are the controls perfect. Playing with a controller constantly reminded me of the fact things were just a little clumsy and I can’t help but wonder if playing with a joystick instead would have led to a much more enjoyable experience.

Game play in Assault Horizon is most certainly a mixed bag. On the plus side, you have a wide variety of missions to tackle. This isn’t just dogfighting, but also bombing missions, rail shooters from the side of a helicopter, and many other types of aerial missions giving each level a new, yet uniform feel. As much as I love dogfighting, the other missions were very enjoyable and felt like a breath of fresh air every time I was able to experience a new type of game play within the same game – all without compromising the core of the game or feeling “gimmicky”. 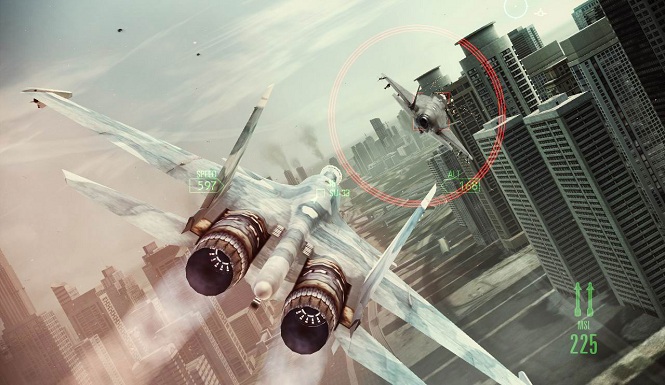 DFM is an integral and cinematic part of the game.

Love it or hate it, the other brand new addition to the game and perhaps most touted feature is the Dog Fight Mode (DFM). DFM gets you right into the cinematic action you see in all of the most popular movies: chasing down the opponent, trying to set up the kill as you both expertly dodge all manner of obstacles threatening to consume the both of you with one small miss-step. Of course, the down side (or plus side) is you can’t make that miss-step. The DFM chase sequences are largely on rails as your fighter goes into auto-pilot mode leaving you to focus on your targeting reticule to line up the perfect shot. You can break, speed up, or break off pursuit, but that’s about the level of control you have. In addition, it didn’t take long to notice that many of the fights are scripted, taking you on a grand tour of destruction until the game decides its OK for you to kill your opponent now. While I can understand the importance of delivering a cinematic experience in an industry that is slowly transforming into an interactive version of the motion picture industry, it can get grating if only for the biggest problem I had with game play…

The missions feel way too long. A very good level in a video game never has you asking yourself “I wonder when this will be over.” A decent level has you saying “I must be near the end” when you really are near the end. Then you have Assault Horizon’s unbearably long wave after wave of seemingly endless enemy fighters or troops that all come out of the woodwork just as you finished cleaning up the last batch. It gives the game a drawn out tedium when preparing for the next mission and you have to wonder “Just how long will this mission be?” Oftentimes there is very little to break up the monotony of going from one part of the stage to the next, urging you on. You hear voice chatter over the radio, you might even be treated to a very quick visual clue reinforcing what is going on, but when you get right down to it, you’re getting ready to tackle the next, nearly identical waves of enemies as the last. At least the developers had the foresight to put in the various mission styles and story moving plot between levels, otherwise what is a mild annoyance could have sunk the game.

It is because of the long levels that the campaign sadly, does not have a really high replay value. More than likely once you beat the campaign mode you might go back to a few levels via level select to pick up any achievements you missed and then dive right into multi-player banking on that to hold your attention to the game. Of course, Assault Horizon has no on console multi-player… tsk… tsk… What it does offer for online play isn’t bad, but nor is it particularly good. You do have access to replay some of the missions in a co-op mode, though not all. In addition, you have a few different competitive multi-player modes, one of which is a standard dogfight and another one has multiple different vehicles working together in completing objectives to win the map. Oh, and don’t bother flipping open your anemic instruction manual for any details on the modes. Its six pages are more a token presence that just barely covers basics so that this game has something to insert with the disk. 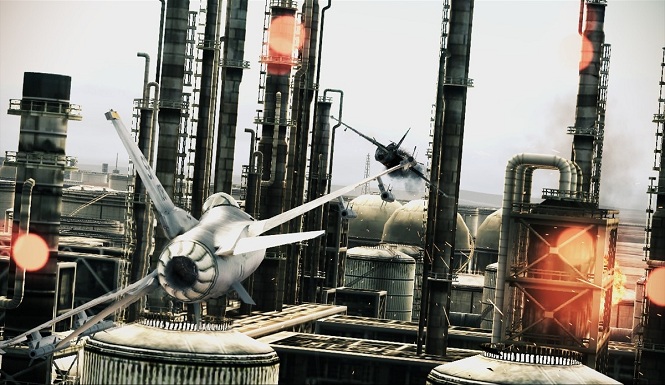 Many moments in Assault Horizon seem as though they straight out of a movie.

Overall, Ace Combat Assault Horizon isn’t a bad pick. It certainly deserves a rent if you’re interested in Aerial Combat games, and it may even warrant purchasing a used copy if you like what you see. You might not play Assault Horizon religiously over the next few weeks due to its low replay value, but that’s OK. There are plenty of other great games coming out this year to compete for your time.

Intuitive way to blend story and game play. Good attempt at trying to reinvent itself for new players without completely alienating its base.

Missions are just a little long. Sacrifices in realism for the sake of game play.

Final Verdict:
GOOD
Ace Combat: Assault Horizon brings the acclaimed series to a lower entry level with easier controls and real locations. Its cinematic flare helps deliver an experience worth playing.
A copy of this game was provided by Developer/Publisher/Distributor/PR Agency for review purposes. Click here to know more about our Reviews Policy.