Agarest: Generations of War (or Record of Agarest War as it was known in North America) returns with a new prologue story that furthers the title’s engrossing strategy RPG gameplay. Sadly it proves to be a similar adventure to the first one, with an almost identical plot structure and equally similar pros and cons. With Ippon-Ichi’s SRPGs being amongst some of my favourite titles, and with my generally favourable disposition towards the very anime cliches Agarest hinges on, I desperately wanted to enjoy it. Sadly, the game just wouldn’t let me give it a more favourable appraisal.

The game follows Sieghart, a young commander fighting with his fellow forces of light against the evil armies of darkness, as he sets out with his companions to find four keys that will unlock a power that will end the conflict once and for all. This is basically the plot of every fantasy game ever made, distilled into its core components. Not only that, but the smaller narrative elements are almost identical to the first game to begin with. Both games start with army leaders who are killed in battle, only to be revived by a mysterious female figure who grants them new powers. The only difference here is that the original protagonist, Leonhardt, chooses to betray the army, whereas Zero’s protagonist, Sieghart, stays loyal. It’s a very poor start to a sequel when the plot has barely changed since the last one and remains predictable throughout. Thankfully, the barren story is bolstered by some well written characters and dialogue, and there are quite a few genuine laughs to be had throughout Agarest Zero as a result of this. 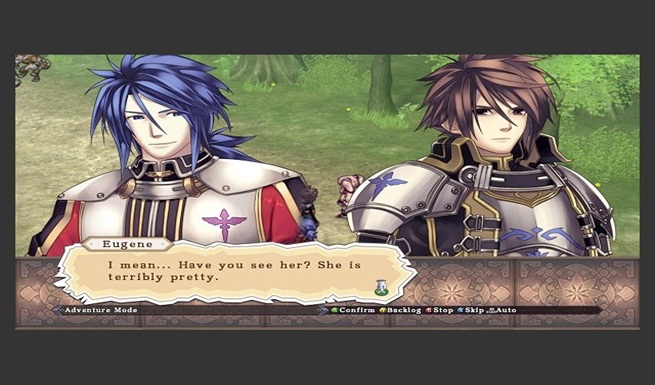 The characters are amusing, if a little stereotypical

Whilst the story may be uninspired, the game’s battle mechanics offer much much more. It’s pretty standard SRPG for the most part, with both your team and the opposing group placed on a grid. The main mechanic Agarest introduces is the notion of multi-character combos. Each character has a set of squares around them where, provided ally characters are placed there, various combination attacks can be performed (provided you have enough action points following your movement phase that is.) It’s all fairly intricate, and there’s a real depth to the whole system as well. A great challenge is also introduced when you consider that your foes are equally capable of the same tactics if given the chance.

Several things conspire to let the game’s solid mechanics down however. For starters we have the challenge. I was just praising it in the above paragraph but, after some time, the level difficulty steps up just a little too much. It’s not that I have anything against a game attempting to push players’ skills to the limits, but when you have a laboriously tedious and un-skippable tutorial one minute and a really frustrating and unrewarding level of challenge the next, you know that something isn’t quite right. I’m sure those who are willing to spend a long time mastering the game will be glad of this, but the rest of us are just bound to get pissed off when our healer is killed for the millionth time in a row. This irritant is also furthered by the way you acquire new equipment. New weapons and armour must be forged by acquiring the necessary component parts, but this requires a fairly excessive amount of tedium and grinding. The final main flaw mixes in with the other two to really stop players from fully enjoying this game: The fact that there is no variation in terrain and scenery, resulting in repetition setting in ridiculously quickly. Front Mission 3, Tactics Ogre, Disgaea, Phantom Brave, all of these titles wow players fight after fight by bringing in new battlefields and scenarios that force the player to modify their tactics time and time again. Agarest on the other hand just presents the player with the same fight endlessly. Hell, even the monster groups are practically identical. 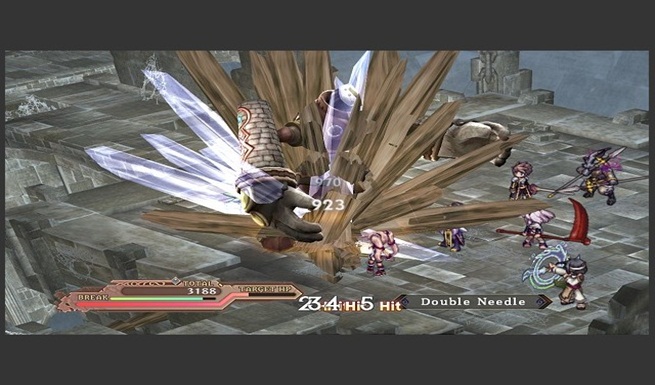 Battles are a double-edged sword, with challenge and frustration in equal measure

The real killer is that the game’s other enjoyable dating sim components are really stifled by this monotonous combat. It seems like you spend hours clawing your way through yet another set of fights to get about five minutes worth of story exposition. The dating elements are interesting enough, with player’s choices having a major impact on the party and characters you have available. Mistreating one of the game’s female characters too much in favour of others can often result in them abandoning your party for good, and your chosen girl of choice gives you a son part way through the adventure who then becomes your main character. The son character is different based on which girl winds up with Sieghart, which I thought was a pretty ambitious feature. There are a few things that bugged me about it though, with choices seemingly having a random effect on affection levels (why is she getting pissed off at me for having asked her about her journey so far?) and a lack of realism when it comes to consequences (why the hell is she getting pissed off at my dialogue choices when she’s meant to be twenty odd miles away from my main character in a previous town?) The main problem is the lack of balance between the two main game components however, with the enjoyably quirky dating elements being completely suffocated by the increasingly dull combat scenarios.

The whole repetition element isn’t helped by the game’s visuals which, despite having a charm, are generally sub-par. All combat elements are rendered with 2D sprites and, whilst they are colourful and detailed sprites, they wouldn’t exactly look out of place on an N64. Story and conversation elements are shown through a text box with a drawn character next to them. These drawings are fantastic once again, but the dev team have responded poorly to criticisms of the original Agarest. The original game was criticised for the cut-scenes seeming too static, so Compile Heart attempt to get around this in Zero by giving the character drawings a very mild animation. Honestly though, it’s a very poor attempt with the most minimal amount of facial movement you can imagine, and it all just looks very creepy now as well. Definitely a step in the wrong direction. The sound is more consistent but, whilst the music is fairly competent throughout, it is hardly memorable. The voice acting will be a point of contention for some as well, with only the original Japanese voice acting accompanying the text. Anime fans who are likely to dig Agarest Zero’s style won’t have a problem with this, but the majority of gamers will probably be put off by the lack of English voices. 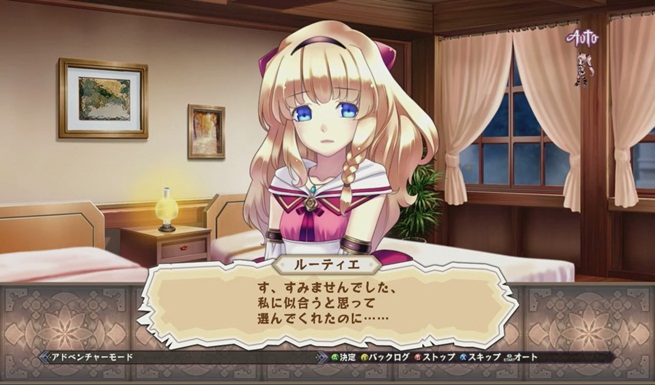 The dating sim elements are the really unique aspect of Agarest Zero, but they are few and far between

If you can stomach some of Agarest Zero’s more repetitive elements, you’ll find a huge amount of bang for your buck on offer. The main quest is eighty hours plus and, with all the choices you make regarding your choice in women, there is a huge amount of replay value as well. This is furthered by the new character creation system in Zero. Whilst you don’t define Sieghart’s personality or appearance, you do get a choice of soul types that define his attributes. The problem is how random this system feels. You just choose a random bunch of soul cards with different weapons on them, but nothing tells you what each card signifies. I chose a bunch of cards with guns on them naturally, as who wants to bring a sword to a gunfight? In the end though my character wound up wielding… A spear!? What the hell? How did that happen? It’s a nice idea to increase replay value, but it needed a much better explanation.

There is a lot you could enjoy about Agarest Zero, but it seems that Compile Heart were more interested in making the game look good on paper rather than in practice. Sure, the battle system is really well designed and intricate, but it is frustrating and unrewarding in practice. Likewise, there is a lot to see and do, but the game would’ve been far less repetitive if it were only ten hours long and didn’t have so many monotonous battles. Agarest isn’t a bad game as such, but it will only be enjoyed by the truly dedicated SRPG player who can overlook its flaws.

Generic music, No choice of English voices, Poor visuals, Very similar to the first game, Predictable plot, Romance options are a bit bizarre, Gets repetitive, Difficulty can be frustrating

Final Verdict:
MEDIOCRE
An old-school strategy RPG merged with dating sim elements, Agarest's complicated and difficult battles combined with its anime themes will put all but the most devoted SRPG fan off
A copy of this game was provided by Developer/Publisher/Distributor/PR Agency for review purposes. Click here to know more about our Reviews Policy.