Now with 99% less plot-spoilers! If you’ve not seen the movie, I encourage you to go see it.

Alice in Wonderlandis a platformer based on the movie of the same name. The game was developed by Disney Interactive Studios and is rated PEGI 7+. It is available on Wii, NDS and PC. It is unusual among movie tie-ins and licensed games in that it has not been launched on every console, and also that Disney has ignored the two gaming juggernauts that are the PS3 & Xbox 360, instead giving Nintendo sole console access.

The plot follows that of the movie, with players receiving such objectives as “Find Alice”. Players are treated to moments from the film as they progress through the game – however these are rendered using in-game graphics and not just segments of video. Destroying enemies and objects in the world rewards the player with “Impossible Ideas”, which can be used to buy upgrades and special abilities for the characters. The white rabbit can stop time and use it to stop objects and enemies, the hare can use telekinesis to move objects around, Mad Hatter can create optical illusions by lining up objects and thus make passageways appear, and the Cheshire cat can turn himself invisible while making hidden objects visible. You must use these powers accordingly to reveal paths and clear obstacles throughout the levels, although most of the time it is clear which power to use. Thanks to different colours enlightening the objects that can be used with the powers, the game is rather easy. There is no heavy thinking to do here, and that’s a bit of a shame. A blue object means you must use the rabbit’s power, a purple one means it’s the hare’s turn; green is for the Cheshire cat, and Mad Hatter has the colour orange matched to him. There was a few times where an obstacle or puzzle stumped me, but never for very long, as it’s usually a matter of moving the pointer over the screen to find something to interact with, that I most likely missed on the first shot.

It’s a real shame the gameplay is not made out to be more puzzling, because otherwise the game does a great job at messing with your head. There are some clever ideas thrown in, and sometimes the game will give out some clues in the shape of strange riddles, like a bird who talks too fast to be understood, so you use the rabbit to stop time, but once you finally get what he’s saying, it still doesn’t make any sense unless you look around and realize you have to step through the right portals in the right order according to the riddle. The best part of the game however is following a white ribbon through the red desert, which has you always finding ways along the path to make sure the ribbon doesn’t get stuck anywhere, by using the characters’ powers to move rocks out of the ribbon’s way, stopping sand tornadoes and creating paths for yourself to cross crevasses. The game also uses a lot of optical illusions, like hallways that seem to go very far, but that actually go nowhere, and mazes that aren’t actually mazes. Those aspects of the game are very interesting, so it’s too bad the gameplay misses the point by making everything too obvious to solve. 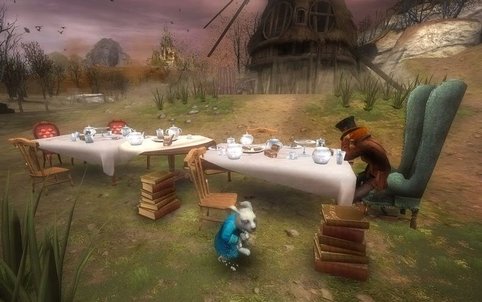 The graphics are quite good, for a Wii game.

There are nonetheless some fine boss battles, although few in number, that require some thought when the characters’ abilities come into play, but by the end of the game, you’ve pulled off those same tricks so often, that it makes the final boss appear laughably easy. These special abilities will also help you during fights with normal enemies, which plague the game in large numbers. You will not come across enemies as you walk around the game, but occasionally, paths will suddenly be blocked and you will be assaulted by the red queen’s guards. Those fight sequences are obligatory, as you cannot continue without defeating them first. That wouldn’t really be a problem if the battles weren’t so repetitive. The enemies get tougher by the end, but you always fight the same card enemy over and over again. I would be in for a palette swap here. It’s possible to purchase new fighting techniques for your characters by finding chess pieces, which make the battles a little more exciting, but in the end, it’s just a matter of mashing the B button. You’ll also need to keep an eye on Alice, since the guards will try to take her away as you fight. Still, I found these forced battles far too numerous and not so enjoyable. I would have rather had standard enemies roaming around, and more puzzles.

Another unfortunate shortcoming is that not all the places from the movie are present in the game. There could have been a bunch more levels. It’s really sad that I clocked in the game at exactly four hours and fifteen minutes. That’s really short, even for a movie-based game. Of course, one could argue that you’re free to go back and collect all the items hidden around the game, but even that wouldn’t lengthen the game by more than an hour or two. Not that any of the stuff is very hard to find either. The levels are not all that large and, although you can explore them, they are very linear in nature – with few secrets. I was really looking forward to exploring Wonderland’s quirky and bizarre locations, so it’s too bad only a few areas are actually there. Nevertheless, whatever’s in there is fun to check out. Even though the gameplay is somewhat lacking, the game’s still got atmosphere, and walking through the whimsical landscapes of Alice’s world is like walking around the weirdest dream, or nightmare. You’ll find upside down hallways, giant talking flowers, doors that lead you nowhere, and a lot of other strange stuff that doesn’t make sense, and it’s a delight. 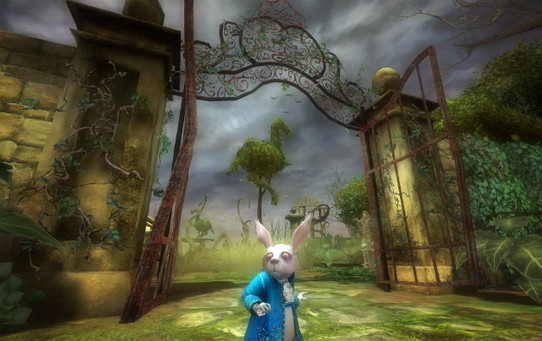 You play as the other characters, rather than as Alice.

Not to mention it’s a very pretty Wii game. The graphics are not all that technically top-notch, but I’m really not picky on that, as long as a game’s got the charm. And Alice in Wonderland has got plenty. The colourful and strange scenery is pleasing to look at, and the game’s gloomy feel really adds to the overall, surreal atmosphere. I’m sure the PC version looks a tad better, but it still looks great for a Wii game. The soundtrack also does a great job of keeping the mood, being a bit eerie in places, sometimes haunting, sometimes just odd, and also lively in other places. Now as far as the controls go, the game doesn’t heavily rely on Wii motion controls, so rest assured. You can move around with the Nunchuk, while most buttons are used to attack, jump, and switch characters. The only Wii motion controls you will use is shaking the Wiimote to use the characters’ powers, and pointing at the screen to enlighten objects. It works pretty well down the road, and makes it feel natural that the game is on the Wii. Altogether, Alice in Wonderland is a fun game when it comes down to solving Wonderland’s puzzles and riddles, and wandering around the game’s far-fetched levels, but it’s just too short to truly enjoy it, and the battles are a bit redundant. The game has this great atmosphere coupled with nice graphics, but there’s just not enough of it. This was obviously rushed to come along with the film, so it’s understandable, and Etranges Libellules, the French team behind the game (who also brought us Spyro: Dawn of the Dragon), still did a good job with the source material, but it’s a shame the end result is only just decent enough. 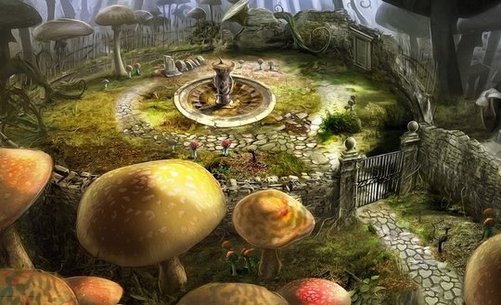 The game remains faithful to the source material.

There are some interesting ideas in there, but the puzzles are very easy to figure out, so in a sense this game will probably be enjoyed more by kids, while adults may still want to play it for the game’s off-the-wall setting. Seeing the credits roll after only 4 hours really annoyed me. It’s good enough for a rental at most. After all, you’ve got nothing to lose, except your head.

Walking through the whimsical landscapes of Alice's world is like walking around a weird dream, or nightmare. You'll find upside down hallways, giant talking flowers, doors that lead you nowhere, and a lot of other strange stuff that doesn't make sense, and it's a delight.

A copy of this game was provided by developer/publisher for review purposes. Click here to know more about our Reviews Policy.
Tagged With: Alice in Wonderland, Nintendo DS, pc, Wii