Alien Breed 3: Descent is the last installment in the Alien Breed series.  You don’t have to play the previous ones to enjoy this game, but with the little story there is in the game it would help to understand it more.  The main jist of the story is that Theodore J. Conrad, whom you play as, has his ship crash into another ship that happens to be controlled by an A.I. computer that is ..well ..a lunatic, if that possible.  Oh yeah and the ship is also infested with alien of all sorts that are just plain and simple, not happy that you are there.  The A.I. computer has a voice of its own telling you to leave and you’re going die, you know the usual.  This adds to the classic sci-fi nature of the game.

In case you have not played any of the other Alien Breed games, this one like the others is a top down shooter that can be compared to Zombie Apocalypse (XBLA) or Dead Ops in Call of Duty: Black Ops as far as the mechanics go.  Speaking of mechanics, they are pretty much identical to the last games mechanics.  You aim with the joystick and fire with the right trigger on the Xbox 360 version, while you move around with the other joystick.  You can get a whole assortment of weapons as you progress through the campaign, like flamethrowers, shotguns, electro-link gun and the mighty Project X that annihilates all the aliens nearby.  There are also grenades, stuns, and medikits that are extremely awkward to use especially when you are begin attacked by hordes of aliens.  You will run down hallways killing aliens while you find ways to unlock doors to progress through the level.  Checking bodies for ammo and picking up credits as you go is almost necessary to survive.  Eventually you will come to save points where you can upgrade weapons and buy items with the credits you have attained. 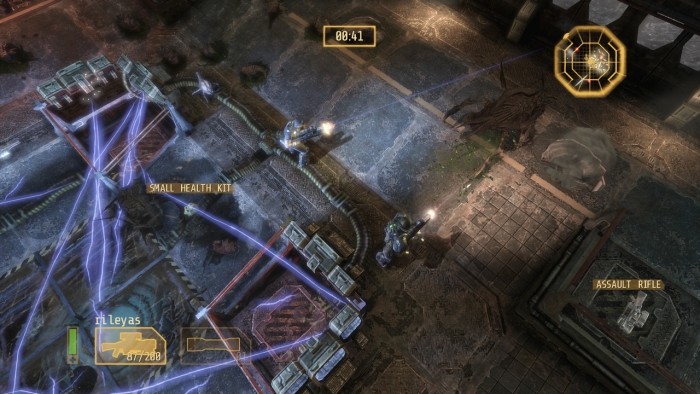 The game has some pretty visually epic boss fights.  Alien Breed 3: Descent is also pretty freaky as it’s dark where ever you are not shining your flashlight an alien can be creeping anywhere.  Noises will freak you out to because you really don’t know what the hell the noise is half the time.. maybe nothing.. maybe an evolved looking alien that shoots electric balls of death at you.  Every time you beat a level, a comic book kind of sketch comes up one after the other explaining some story to the game but I can tell you right now, the story is not one of the stronger points in the game.  There are floods in the ship at some points and for the first time in the series, you step outside of the ship and walk along the hull of the ship in the open outer space which was pretty cool, until an alien killed me from behind cause you can’t hear anything in space.  Sometimes running through hallways can get boring but the boss fights are worth it just for the unique visual style of them.

Other than singleplayer, there is Survival Mode which is like horde mode where waves of aliens come after you and you will inevitably die.  This can be played by yourself or in co-op which is much more fun.  The only problem is it was hard to find a community playing the game online, which could be due to a number of things with all the games that have been released for the holiday season.  So co-op would be best to get a buddy to download the game with you or you can play it local as well.  You can also play 3 levels in co-op where you are scored.  Freeplay mode lets you choose any level and start from the beginning in case you just want to beat the last level and see the end. 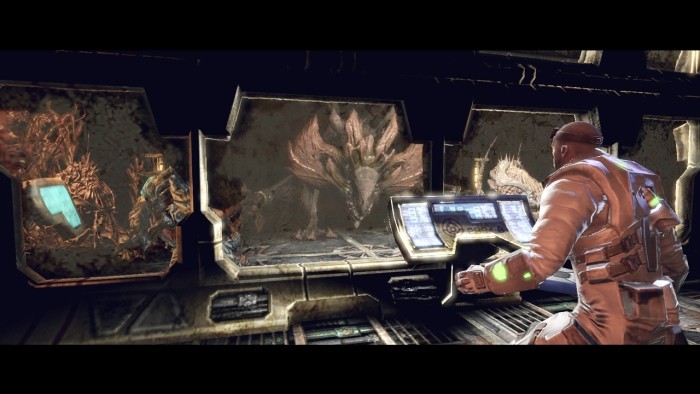 Not looking good from over there.

Overall the game is a fun sci-fi, top down shooter that is definitely worth the money, but if you played the previous games you are going to be playing a very similar game with Descent.  You don’t see enough good sci-fi games out there, I think the last one I played was Dead Space.  The Xbox 360 version has unlockable avatar rewards that don’t seem to work once you have unlocked them.  Hopefully this is something Team 17 will fix.  If you are looking for a good arcade shooter, I’d say pick this up, but if you have played the previous games in the Alien Breed series you won’t be missing anything.  The game is available for the Xbox Live Arcade, PC and Steam for $10.

Almost identical to the last game and has an awkward mechanic when it comes to using a health pack or a grenade.

Final Verdict:
GOOD
Alien Breed 3: Descent is a good top down sci-fi shooter that concludes the Alien Breed series.
A copy of this game was provided by Developer/Publisher/Distributor/PR Agency for review purposes. Click here to know more about our Reviews Policy.