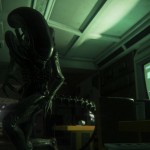 Alien Isolation Mega Interview: ‘No Game Comes Close To The Dynamic AI of The Alien We Have’

Senior Designer Gary Napper talks how the alien in Alien Isolation is perhaps the greatest representation of AI in video games.