Posted By Will Borger | On 23rd, Sep. 2013 Under Article, Reviews | Follow This Author @will_borger

Let’s face it: the old school shooter is dead. It’s been trampled to death by the rampant popularity of games like Call of Duty and Battlefield, and the legion of imitators and also-rans that have followed in their footsteps, trying to carve out a piece of that ridiculously profitable pie. Meanwhile, the shooters that built the genre grow fewer and farther between each year.

Eight years later, there’s still no sign of a proper sequel to Quake IV, or the long-awaited DOOM 4, and even when these type of games do appear, they’re often watered down by modern trends or their own ambitions, and better off forgotten, like Unreal Tournament III, or Duke Nukem Forever. Even brands that once proudly carried the flag of the arena shooter, like Halo, have all but given up and surrendered to  linear level design, create-a-class, and killstreaks. Sure, every now and then we’re thrown a bone like Tribes: Ascend, and you can always find a match on Quake LIVE, but by and large, the days of awesome weapons, alien menaces, skill-based, arena multiplayer seem to be behind us.

That’s where CI Games’ Alien Rage comes in. Unfortunate title aside, this game has no pretenses. It wants to be an old-school shooter, complete with crazy sci-fi weapons, a variety of different aliens to fight, intense boss battles, and lots of levels. 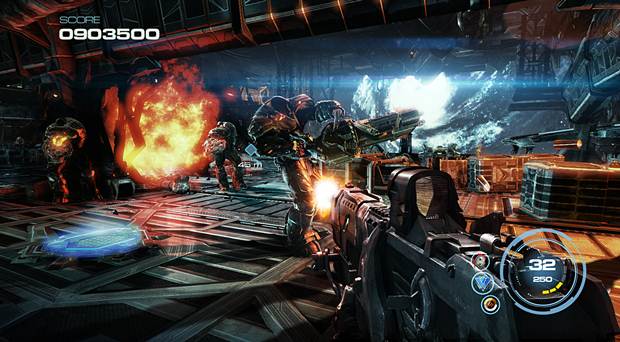 It starts off simply enough. It’s the far future, and humanity is in the middle of an energy crisis. Luckily, we’ve  just discovered an asteroid that’s chock full of promethium, a remarkable energy source capable of providing an incredible amount of energy. Naturally, mining operations are set up and soon, we’re harvesting it by the truckload. Everything’s going smoothly until the Vorus, an advanced alien race, show up. Turns out they need promethium, too, but they’re more than willing to share. For a while, everything goes great. Then, without warning, the Vorus attack us and quickly take over the asteroid.

"While the two weapon limit has become the genre standard, it seems like a rather arbitrary limitation in a game that puts so much emphasis on its weapons the way Alien Rage does."

Enter Jack, a lone marine sent in to figure out what the heck is going on.  That’s pretty much all the set-up you get in Alien Rage, but it works. After all, this isn’t a game about story. It’s a game about shooting aliens in the face with crazy guns in a sci-fi setting. And, to the game’s credit, it mostly delivers on that premise.

Alien Rage’s gameplay is a mix of old-school and modern FPS design. The game features 10 weapons, all with a primary and secondary fire function. Guns range from FPS staples, like an assault rifle with an underslung grenade launcher, to the unique and ridiculous, such as the Vorus Blaster. The Blaster’s primary fire functions as an extremely powerful shotgun that will cut enemies in half at close range, while the weapon’s secondary fire shoots a large ball of plasma that explodes on contact. Genre standards such as the rocket launcher provide the firepower necessary to go toe to toe with bigger enemies, but the real standout is the minigun, which tears through nearly everything in the game, even on higher difficulties. 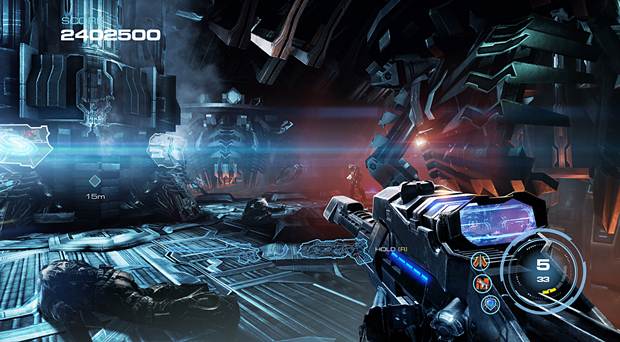 While certain guns will undoubtedly spend more time in your inventory than others, each fills a role, and there’s a lot of fun to be had in discovering how to combine the primary and secondary fire of each weapon to best take out the Vorus horde.  Unfortunately, the game only allows you to carry two weapons at a time, aside from your pistol. While the two weapon limit has become the genre standard, it seems like a rather arbitrary limitation in a game that puts so much emphasis on its weapons the way Alien Rage does.

"Thankfully, Alien Rage delivers enemies in spades. Some have jet packs, others heft heavy grenade launchers and explode on death, and still others make use of cloaking fields to get behind you and stun you with their melee weapons."

The rest of the gameplay is fairly standard. Jack can sprint, crouch, melee, and aim down the sights of his weapons with the best of them. What makes Alien Rage stand out, however, is the ability to slide while sprinting. This allows you to move from cover to cover quickly, slide under obstacles, or dodge missiles or grenades. Combine this with Jack’s unlimited ability to sprint, and combat becomes fast paced and frantic. Believe me, there’s nothing like sliding up to an enemy, getting a shot off with your Blaster at close range, and slide away before his friends even have time to react.

If that was all Alien Rage offered, it would be enough. However, the game also scores you on how well you’re doing, offering bonus points for headshots, explosive kills, multikills, and streaks of kills performed in a specific way. It adds another dynamic to the game, and you’ll often find yourself risking death to try and land just one more headshot to continue your streak. Best of all, the points you’ll earn from kills allows you to unlock perks, such as extra weapon damage, an upgrade for your pistol, or more health. 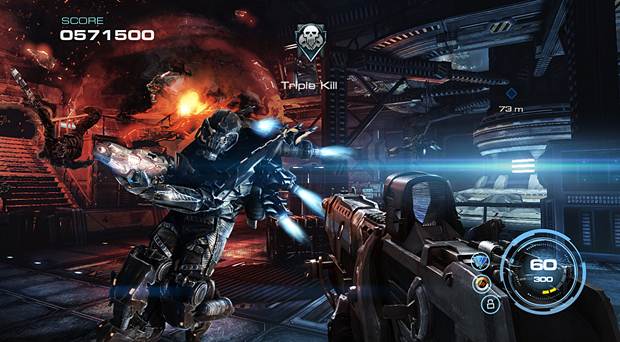 But, as any veteran FPS player will tell you, it doesn’t matter how fun the weapons are to use if the enemies you’re using them against aren’t fun to fight. Thankfully, Alien Rage delivers enemies in spades. Some have jet packs, others heft heavy grenade launchers and explode on death, and still others make use of cloaking fields to get behind you and stun you with their melee weapons. The sheer variety on display means that you’ll never get bored of fighting the same enemies over and over again, and each enemy requires you to change up your tactics, making engagements dynamic and exciting, even against the starting enemies. Of course, the real standouts here are the boss fights. There’s eight in all, and each is varied enough to make them feel fresh. The game isn’t afraid to place them in the middle of a level, or leave them out of some entirely, so you never know when you’ll run into them.

"The sound design is just as good as the environment design. The Vorus sound genuinely alien, the weapons are loud and satisfying, and the background music is enjoyable."

And since we’re on the subject of levels, fear not: the level design in Alien Rage is fantastic. The game runs on Unreal Engine 3, and everything looks great. Levels themselves are varied, and you’ll guide Jack through a variety of environments as the game progress. You’ll find yourself trudging through a promethium refinery, infiltrating a Vorus ship, and piloting a mech on the surface of the asteroid before it’s all said and done. Of course, there are collectibles scattered about each area, but finding them is worth it. Some simply offer bonus points, making it easy to rack up a high score, while others are audio diaries that reveal what happened on the station before Jack arrived. The audio logs are surprisingly well done, and flesh the story out quite a bit.

The sound design is just as good as the environment design. The Vorus sound genuinely alien, the weapons are loud and satisfying, and the background music is enjoyable. Between (or sometimes during) encounters, Jack will banter with Ray, another marine, and Iris, their AI, both of whom remained aboard their ship. As you’d expect, they’ll point out mission objectives, and provide helpful hints, but they’re also a great source of comic relief, and there are a lot of memorable exchanges: Iris and Ray make bets on whether or not Jack will survive an encounter, Iris imitates a GPS, and Ray makes a Metal Gear Solid reference or two. All of this contributes to the tongue-in-cheek nature of the game, and greatly aids the pacing. 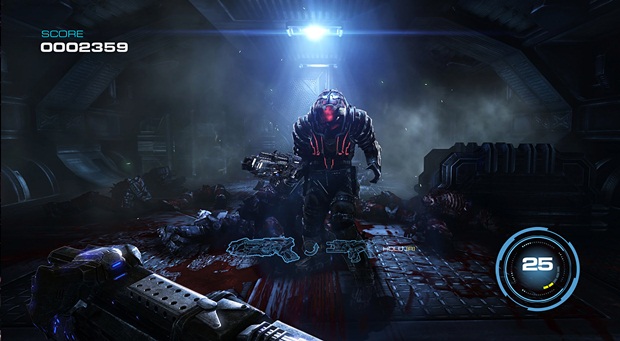 For all its successes, however, Alien Rage isn’t without its flaws. Texture pop-ins are frequent, the checkpoint system is inconsistent and occasionally frustrating, and the game’s decision to utilize regenerating health is bizarre given its ambitions. The biggest problem, however are the bugs.

"For all its successes, however, Alien Rage isn’t without its flaws. Texture pop-ins are frequent, the checkpoint system is inconsistent and occasionally frustrating, and the game’s decision to utilize regenerating health is bizarre given its ambitions."

Sometimes, the game wouldn’t allow me to pick up weapons in the environment, and there were points were I was forced to reload a checkpoint because the game simply wouldn’t allow me to open a necessary door to progress, or trigger a scripted explosion to create a path. Once, I even had to restart a level to make the necessary trigger appear. These instances were infrequent, and I never encountered anything I couldn’t get around, but when they did crop up, they ground all progress to a halt.

Ultimately, however, Alien Rage is an extremely fun game. It took me about 11 hours to complete the game on hard mode, which is impressive considering the $20 price tag. The game also features leaderboards, and a multiplayer mode. Unfortunately, the servers were not up at the time of this writing.

CI Games set out to make a great old-school shooter with Alien Rage, and in spite of the game’s flaws, that’s exactly what they did. The game feels like a return to a simpler time, when space marines were cool, weapons were insane, and an alien menace was all you needed to have a good time. And, considering the state of the genre right now, maybe a return to that mindset is exactly what we need.

Texture pop-ins at the start of new areas. Frustrating checkpoint system. The occasional bugs and glitches.

Despite its technical flaws, Alien Rage is an old-school shooter that harkens back to the genre’s glory days. It’s not for everyone, but fans of classic shooters will find a lot to love here, and at a price that’s hard to beat.

A copy of this game was provided by developer/publisher for review purposes. Click here to know more about our Reviews Policy.
Tagged With: Alien Rage, City Interactive, pc, ps3, xbox 360