Film tie-ins are one of those gaming elements that is generally hated, but there are definitely some film franchises that produce fairly decent games. The Aliens movies have managed this particular feat, with some of the Aliens vs. Predator titles kicking some series inter-species ass. Forget the Predators for this one though, Infestation is all about our Xenomorph pals and, whilst it has some gameplay issues in general, the use of the Aliens license in Infestation is top notch.

The game plays out in a very similar style to the 2D Metroid titles of old. You traverse through the open ended environments to achieve your objectives, all the while looking out for upgrades and new abilities that will let you do more exploring. All the while you need to fend off the eponymous Aliens in increasingly tough combat scenarios.

These combat elements are both the best and worst aspect of Aliens: Infestation. The thought and constant fear of combat is something that elevates the game above the sum of its parts. The game’s challenge is what truly gives it that special something, with agile enemies, dark corridors and a constant lack of ammo making every potential encounter a tense one. There’s also the issue of death lingering over your head as, once one of your squad members goes down, s/he’s gone for good. This adds immensely to the pressure, but it would have been a far more effective mechanic if the characters had any kind of real personality or unique traits. 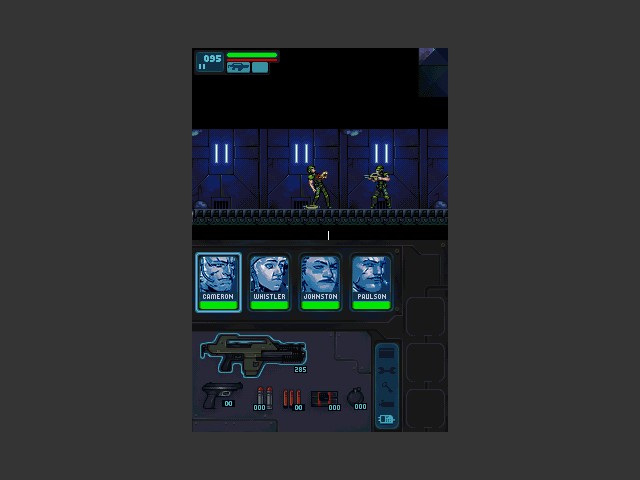 The graphics and sound are other elements that add to the game’s incredible atmosphere. The colourful and detailed sprites that are usually associated with modern 2D games are present, and the whole look and feel of the game has a real polish to it, even if the cartoon visual style may not have been the most appropriate way to illustrate the Aliens universe. The sound, though it tends to blend into the background a bit, offers an atmospheric and appropriate accompaniment to the thematic content of the game. The intricately structured tone of Infestation is topped off by the use of the Aliens universe, with accurate sound effects and loving references to the wider film franchise firmly grounding Infestation as an extension to the Aliens Universe. This is definitely a game that’s been designed for serious fans of the films, and the attention to detail is there as a result.

Once the atmosphere dissipates in favour of raw gameplay though, Infestation breaks its stride somewhat. Whilst the imminent fear of combat makes Infestation a brooding and daunting experience, the actual combat itself comes as a bit of a let down. Whilst it’s certainly functional, elements of the gunplay in Infestation began to really grate after a while. The movement controls become a bit confused in the heat of a fight, with your aiming becoming locked horizontally. It resulted in many moments when a Xenomorph jumped behind me and I had no immediate way of turning around to respond to the threat. Whilst battling the Alien menace is entertaining enough to overcome any minor niggles, battles against humanoids and robots become tedious, with you being forced to hide behind cover and pop out and fire over and over again.

The main thing that prevented me from really getting into Infestation was the control scheme, with a few odd choices impeding my full enjoyment of the game. The general button layout, whilst not ridiculous or uncalled for, lacked any kind of real tactility and felt a bit loose. The use of the touch screen was the real killer though. I generally abhor the practice of developers dumping loads of subsidiary commands onto the touch screen in DS and 3DS games so, whilst I could stomach equipment being selected on the bottom screen, regularly occurring actions like reloading should really have been given their own button. The issue of the map screen was also a problem, with it replacing your equipment functions and indicators on the bottom screen when in use. It felt like I was constantly switching back and forth between the two screens, and it really began to erode the game’s atmosphere after a while.

There’s also a bad effort going into the game’s stages, though not quite in the way you’d expect. The game’s map is large, offering a fair amount of content, and the levels within are well designed with plenty of avenues for exploration. That said, it all gets a bit repetitive after a while. Though the levels are decent from a gameplay perspective, their visual design falls flat, with endlessly repeating dank corridors and tight air vents. Other games in the exploration action RPG genre such as Castelvania and Metroid keep players hooked with themed stages and exciting locations to explore, but Infestation is seriously lacking when it comes to level variety. 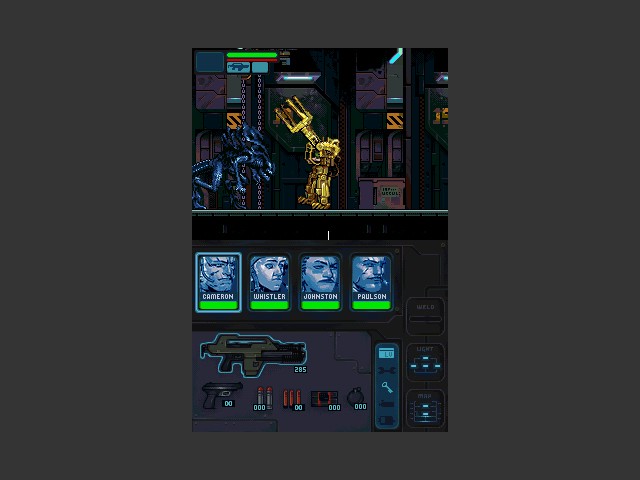 As an extended piece of the Aliens Universe, Infestation is engaging and lovingly designed for fans of the classic movies. As a game though, whilst it creates an impressive atmosphere and offers some deep and challenging gameplay, there are a few stumbling blocks that need to be considered. If you can get over some monotonous moments and a few control issues, consider Infestation a must buy if you’re an Aliens fan.

Oozes atmosphere at every turn, Fits in well with the rest of the franchise, Really good level of challenge, Decent production values, Can be satisfying

Final Verdict:
GOOD
A stylised handheld extension of the classic Aliens movies, Infestation offers an enjoyable and tense, if repetitive, attempt at a metroidvania style romp
A copy of this game was provided by Developer/Publisher/Distributor/PR Agency for review purposes. Click here to know more about our Reviews Policy.