The game’s story is split into three overlapping narratives over the three campaigns. The marine campaign features the typical ‘survival’ scenario as you play as a nameless Marine, commonly referred to as ‘the rookie’ by his squad mates. You and your squad mates are responding to a distress signal coming from a nearby military-occupied planet. On arrival you discover the planet has been infested with Aliens and you and your squad mates have to work together to survive. The Alien campaign centres on a Xenomorph (known simply as number six), subject to captivity in a human-occupied laboratory. Breaking out, along with an army of your Alien cronies your task is to wreak havoc upon the marine forces as you attempt to overrun their colony. Lastly, the Predator campaign follows a lone ‘Youngblood’ predator, who like the Marines, is also responding to a distress call on the planet. The ‘Youngblood’ after discovering the bodies of fellow elite predators, must now undertake the hunt of the Xenomorphs and Marines solo.

The marine campaign features several collectable audio diaries which fill in the game’s back-story significantly. The downside however is that somewhat strangely; they can only be listened to via the pause menu and cannot be accessed during gameplay (ala Doom 3/BioShock). Sadly the story line covers little new ground and, while this is not always a bad thing, it is pretty much the same as it was in Rebellion’s original AvP title for pc back in 1999. 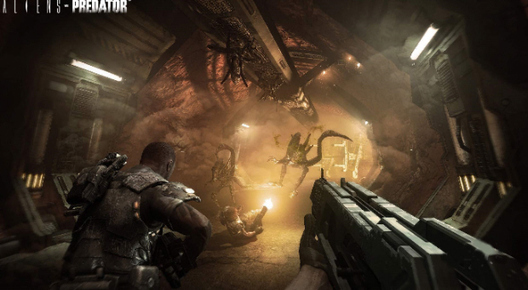 Visually I found the game to be totally underwhelming. For a start, the environments are severely repetitive, the development team seemingly putting little effort into making one area differentiate from the next. This gets to the point where you’re feeling a strong sense of déjà vu every time you entered a ‘new’ room or area. It certainly doesn’t help either that the linear path the three campaigns follow often crossover, forcing you to relive and retread many of the games locations up to three times. The scenery itself (repetition aside) looks extremely generic and bland. When you’re not corridor-crawling through the game’s many dimly lit passages and spaces, you’re exploring overly dark, drab and dank military base/jungle/temple locations. The texture-work it suffices to say is definitely not ‘state-of-the-art’ and despite this, there were countless times the game would stutter due to frame-rate issues, almost constantly dropping well below the standard thirty frames-per-second.

The character models are definitely very nice and while they lack variation, are still visually faithful to that of the source material. The fluidity in the games animation is definitely not up to standard. A number of the game’s character models appear as if they are missing a few frames of animation. The predators suffered the most from this, often appearing unnaturally robotic and wooden in motion. The game’s dynamic lighting effects are by far the most visually pleasing aspect of the game, but even so it fails to really impress when compared to other recent titles. The sound effects on offer here, as with previous instalments in the AVP franchise, are exceptionally well done. Everything represented here is truly faithful to the source material, whether it is the bone-chillingly unsettling hisses of the Aliens or the trademark buzzing of the pulse rifle, if it’s stellar SFX you’re after, AVP certainly has you covered. That said, the voice acting is generally terrible with the exception of ‘Weyland’ – a recurring character in the AVP universe who is portrayed by Lance Henriksen. The game’s soundtrack fails to impress, delivering one of the most overwhelmingly mediocre and uninspired musical scores I have heard in a while.

Similarly to the previous AVP titles, the biggest draw to playing Aliens vs. Predator is that allows for the playing of three distinct races; Xenomorphs (Aliens), Predators and Marines across three distinct campaigns and a multiplayer component. Of the three playable races, Marine gameplay is by far the most ‘run-of-the-mill’: playing like a poor man’s ‘Doom 3′ centring mostly around survival as you navigate the game’s generic level design, flashlight in hand, and constantly monitoring your motion tracker for any nearby movement or hostile activity. The marine campaign while it has a promising start fails to really take off and delivers a mediocre experience from start to finish. The marine campaign is the weakest of the three campaigns which is ironic considering that it is by far the longest, clocking in at around six hours on the regular difficulty setting. 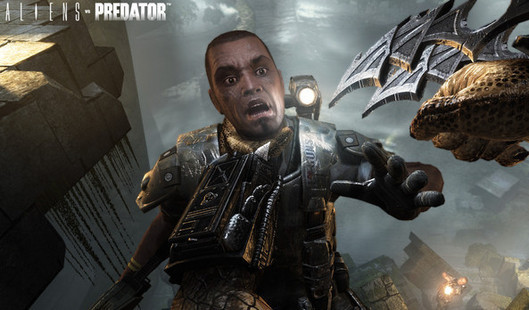 While Marines lack the mobility and the strong defensive capabilities of their Alien opposition, they make up for this with their heavy weaponry; or what little of it they have. There’s the standard pistol sidearm (weak, but blessed with an infinite supply of ammo) as well as the Assault Rifle, Shotgun and Scoped Rifle. Introduced later in the game and far less common are the flamethrower and minigun weapons; the former is utterly useless and the latter forces you to drop both of your primary weapons. The Marines’ weapon choice is, to be brutally honest, extremely conventional, and the player will realise this quickly. Not even the secondary fire modes (such as burst-fire for the pistol and tracking for the minigun (smart-gun)) are enough to redeem what is an execrable campaign.

Alien gameplay is vastly more enjoyable, but the campaign it supports only spans around a two hour long experience. As I mentioned earlier, the Xenos are the most agile and mobile of the three races. Able to move at breakneck speeds and capable of climbing virtually every wall and surface, Xenomorphs unlike the Marines and Predators, lack ranged combat capabilities and instead rely on their skills in melee. Aliens can also constantly regenerate health without the need of health packs. You can also see enemies through walls, but this ability has short range. Melee combat is dealt with using a Paper-Scissors-Rock system. Both the Aliens and Predators can pull off light attacks, which in exchange can be blocked by using the guard function. A heavy attack can break an enemy’s guard, thus leaving them open to more attacks. There are also instant stealth kills which can be executed on unsuspecting enemies. These trigger one of the game’s many killcams as you watch your victim perish before you in an incredibly gory manner. The downside is that during this unskippable sequence you yourself are open to attack.

Finally, the Predator gameplay: probably the best of the three purely from a fun-factor perspective. Focussed primarily around stealth, Predators have the ability to sneak around cloaking themselves invisible for several seconds as well as switch between multiple visors that will allow you to seek out targets in your surroundings. Predators can also (within certain limits), leap around environments to reach areas that both the Marines and Aliens would not normally be able to reach. In addition to their trademark retractable wrist blades, Predators have access to their shoulder-mounted plasma cannon, proximity mines, a glaive-like throwing disc (Darksector, anyone?) and combi-stick (a spear like javelin capable of a one-hit kill). 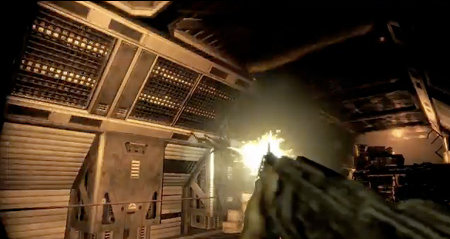 The interior sections of the Marines campaign are very reminiscent of Doom 3.

Overall in regard to the single player campaigns; the game’s mechanics feel heavily dated and the structure is plagued with repetition. The level design is blatantly average as is the pitiful enemy AI. Not to say you won’t have any fun playing through it, but just don’t expect anything to rival the single-player efforts of Rebellions previous instalments to the franchise. All up the three campaigns together measure to around 8-10 hours of gameplay which is decent for today’s standards. It’s safe to say if I was giving this game a score based solely the single player experience it would be lucky to score anything higher than a five.

Aliens vs. Predator’s multiplayer component fares much better – delivering a solid, more polished and well-rounded experience. As with the single player, multiplayer lets you play as one of the game’s three distinct races across multiple game types. There are free-for-all and team deathmatch variants that everyone knows and loves, as well four other modes; infestation, predator hunt, domination and survival. Infestation, probably my favourite of the game types features a single alien against a team of marines. The alien must essentially ‘infect’ the marines by killing them thus making them join his team. The game is over when the last marine is killed. Predator Hunt is somewhat similar, except revolving around a team of marines fighting against one player designated as the Predator. When the predator is killed, the killer is now tasked with the playing of the Predator, rinse and repeat. Domination mode has teams of players competing for control over capture points located around the maps. Survivor mode is the latest take on the popular horde and survival modes from Gears of War and Left 4 Dead, pitting you and two other marine players against hordes of relentless AI controlled Aliens. While it’s definitely not as robust as the aforementioned variants, there’s still a bit of fun to be had here. 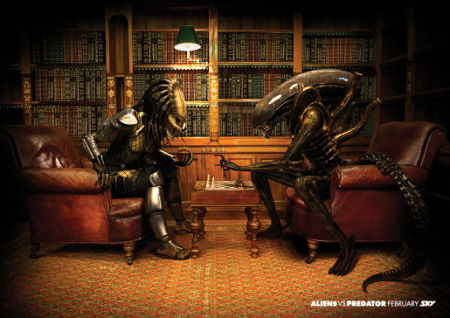 Map design is a mixed-bag. Many, not just from a visual perspective, are rather poor, and good maps are few and far between. All in all it’s a fun distraction, expect nothing more or less. The controls, while not totally broken, do lack some of the fine tuning that I’ve come to expect from FPS titles as of late. The Alien controls in particular are awkwardly and clunky and it seems as if fifty percent of the time, transitioning from surface to surface is inconsistent leading to many cheap deaths. Fortunately the Marine/Predator controls fare better, although I found the camera control to be just not right and even after adjusting the sensitivity it still wasn’t exactly ideal for the kind of gameplay on offer. Overall a decent attempt at rebooting the franchise. As I mentioned before I was still a bit wary in case the game turned out as poor as some of Rebellion’s other titles, but having played it, it’s not THAT bad. The single player is not great and the multiplayer, while fun, probably isn’t enough to warrant purchasing it from new. Hit the pre-owned section at your game store of choice if you want a copy.

Final Verdict:
FAIR
Not THAT bad.
A copy of this game was provided by Developer/Publisher/Distributor/PR Agency for review purposes. Click here to know more about our Reviews Policy.