All Zombies Must Die Review

Posted By Kartik Mudgal | On 08th, Jan. 2012 Under Reviews | Follow This Author @KartikMdgl 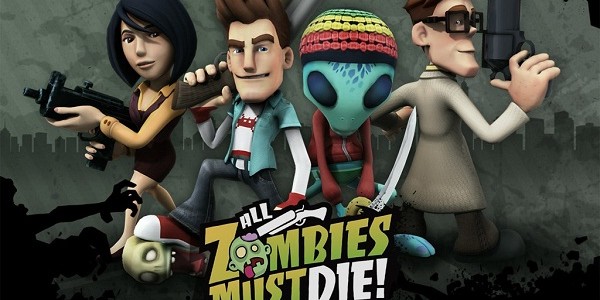 Oh look what it is! It’s another zombie game. And it’s also another twin-stick shooter. All Zombies Must Die for Xbox Live is a fun game, just like almost all zombie games out there, but the question is how much depth does it have? Not much, apparently. The core gameplay mechanics are just like plenty of twin-stick shooters out there; you face waves of zombies and have to escape each stage after fulfilling certain objectives.

The goal of the game is simple; guide one of the four characters to safety from the unrelenting zombie hordes that spawn out of the ground. You have plenty of weapons to choose from, or you can even use your fists old school style. The zombies drop burgers aka health from time to time, so it is pretty difficult to ‘die’ in the game.

You get a really overpowered weapon early in the game, namely the Shotgun, and while it’s good to clear large groups of zombies, it somewhat has a high reloading time. 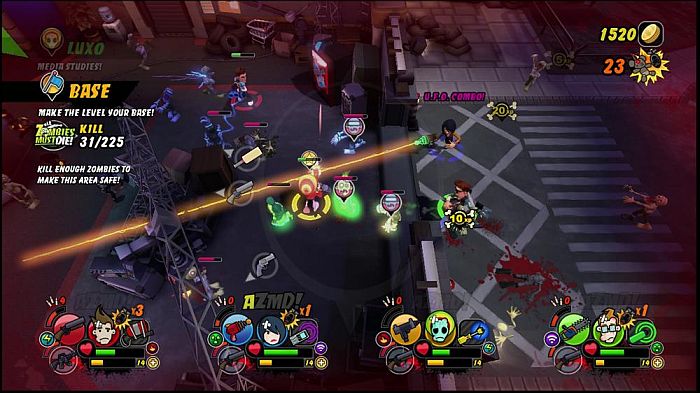 Most of the weapon pickups are available at set locations and you can press LS to check where they are. There also items which you can search to find some interesting things, or find quest items to continue through the game. Before you can leave a section, you have to complete certain objectives for a gatekeeper who then opens the gate for you to proceed. As expected, the sections get tougher as you keep playing, but you also get access to better weapons like a… Cricket bat.

The game costs 800MSP, which is quite decent considering this game has quite some content for a zombie game. Blasting zombies can get a bit repetitive, as you would expect, and you can’t really avoid that feeling unless you really love blasting zombies. The gatekeeper gives some simple-hard quests for you to accomplish. It can get annoying sometimes, especially if you die, but these quests normally aren’t that painful.

The visuals are a bit cartoony for my taste, considering I like games like Dead Nation where there is a lot of gore and a creepy setting. Although, the visuals shouldn’t be a turnoff for most people out there, due to the fact that there isn’t a lot of area to cover in each section.  There is a co-op mode as well, but only offline. This hurts the replaybility a bit, so I have no idea why the developers didn’t add the online co-op option. 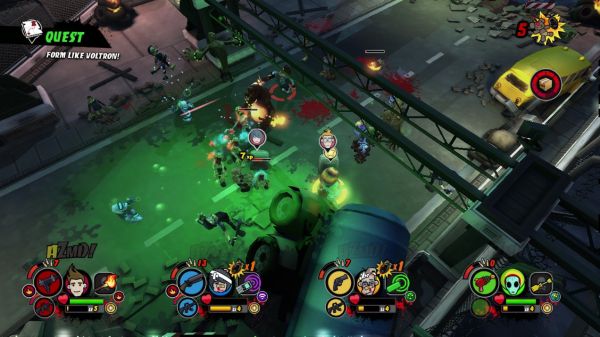 You can level up once you kill zombies and do things that get you XP, and while it can make you better as a character, it’s generally pointless. You can just repeatedly kill zombies in a section to gain XP, and that’s really not fun. All said and done, the game leaves you feeling underwhelmed, but it can be fun for a while just like most of the other zombie games out there.

If you are craving for a twin-stick shooter, and there’s no reason why you should considering there are plenty of other options out there, All Zombies Must Die can provide you a fun for a little while. Other than that, for 800 MSP I really can’t be that much harsh on it. It’s worth a shot if you get the game on a sale for an attractive price.

It's fun for a while. Lot of things to do in-game.

Repetitive. Doesn't do the genre any favours.

If you are craving for a twin-stick shooter, and there’s no reason why you should considering there are plenty of other options out there, All Zombies Must Die can provide you a fun for a little while. Other than that, for 800 MSP I really can’t be that much harsh on it. It’s worth a shot if you get the game on a sale for an attractive price.

A copy of this game was provided by developer/publisher for review purposes. Click here to know more about our Reviews Policy.
Tagged With: All Zombies Must Die!, double six, Xbox Live