Jim Fowler speaks with GamingBolt about his experience in the industry, and how he hopes music will evolve in games in the future.

With nearly two decades’ worth of experience in making music and designing audio for theatre, films, and games, Jim Fowler is certainly a man who knows his music, and the quality of his work certainly speaks for itself. Whether it’s the scores of recent releases like Blood and Truth and Creature in the Well or orchestrations of the soundtracks for games such as Everybody’s Gone to the Rapture and Bloodborne, chances are, if you play games extensively, you’ve heard his music. Recently, we had the chance to talk to him about his work in the industry, how he goes about approaching every new project, and how he feels music and audio in games can improve in the future. You can read our full conversation below.

"I suppose ultimately, I’m trying to figure out what the soul of the game is so that I can best support and express that."

Have there been any pieces of music or tracks from certain individuals across media that have inspired you as a musician throughout your career?

So, so many! I started to make a list and it just went on and on and on. I find it really hard to narrow things down but in terms of music that I come back to for inspiration a lot: Prokofiev, Ravel, Leigh Harline, Django Bates, Elmer Bernstein, Duke Ellington, and, and, and…

What is your process like when you’re trying to land on what sort of musical style is the best for a particular game? How much collaboration with the art and narrative teams of a project does that require?

I like to know as much about gameplay, story, art, animation as possible – it all feeds into what the game is. But I think the most valuable question I can ask early on is ‘how should the player feel when they finish the game?’. For me this question gets outside the technical nuts and bolts (which are important) or music references (which are also important) and just leaves the core emotional aim – and expressing emotion is what music’s especially good at! The feeling the game is aiming for might be ‘satisfied’ or ‘elated’ or ‘pumped up’ or ‘inconsolable’ or even just ‘that was fun’. Any of these are big clues as to what the music should be.

Reference music from the game director/audio director/dev team at large is important in narrowing down a style but I also like to know what people are listening to as they work – have they made themselves a chilled out playlist or do they feel more in tune with the game if they’re listening to something more active? I can then think about what the similarities are between the references and people’s listening habits (which may be harmonic or structural or emotional or any number of other things) and that’s another clue into what the music needs to be.

I suppose ultimately, I’m trying to figure out what the soul of the game is so that I can best support and express that.

Do you believe specific instruments can lead to certain musical aesthetics in games? What is your process for selecting what kind of instrumentation you will represent in a given game’s soundtrack?

I do. Instruments have all sorts of cultural connotations and baggage and emotional connections that an audience will make subconsciously. But that also applies to the way an instrument is played – a low, staccato bassoon melody will instantly come across as comic because it’s been used that way many times – even if that wasn’t the intention. On the other hand, a high and lyrical bassoon solo can be heart-breaking, and because that sound isn’t used as much it has fewer cultural associations.

One way to avoid associations and connotations is to use electronic and synthesized instruments – you can make brand new sounds that way, if that’s what you’re after. For Creature in the Well, I wanted sounds that were both unfamiliar and familiar at the same time – I wanted the listener to feel like the source of the sound was on the tip of their tongue; like the original had been lost and become something else. That seemed to me to tie into the story nicely. To enhance the ‘humanity’ of BOT-C but reflect his robo-ness I decided to use sounds that seemed to be electronic but were actually acoustic in origin. For instance, rubbing guitars to create paddy chords, or playing piano parts backwards and then reversing them. I swung a broken guitar cable in time to the music in a room full of neon lights and the recorded hummy interference sounded great with a really nice unpredictable edge to it. Tuned and sampled, that became the bass instrument for most of the cues. 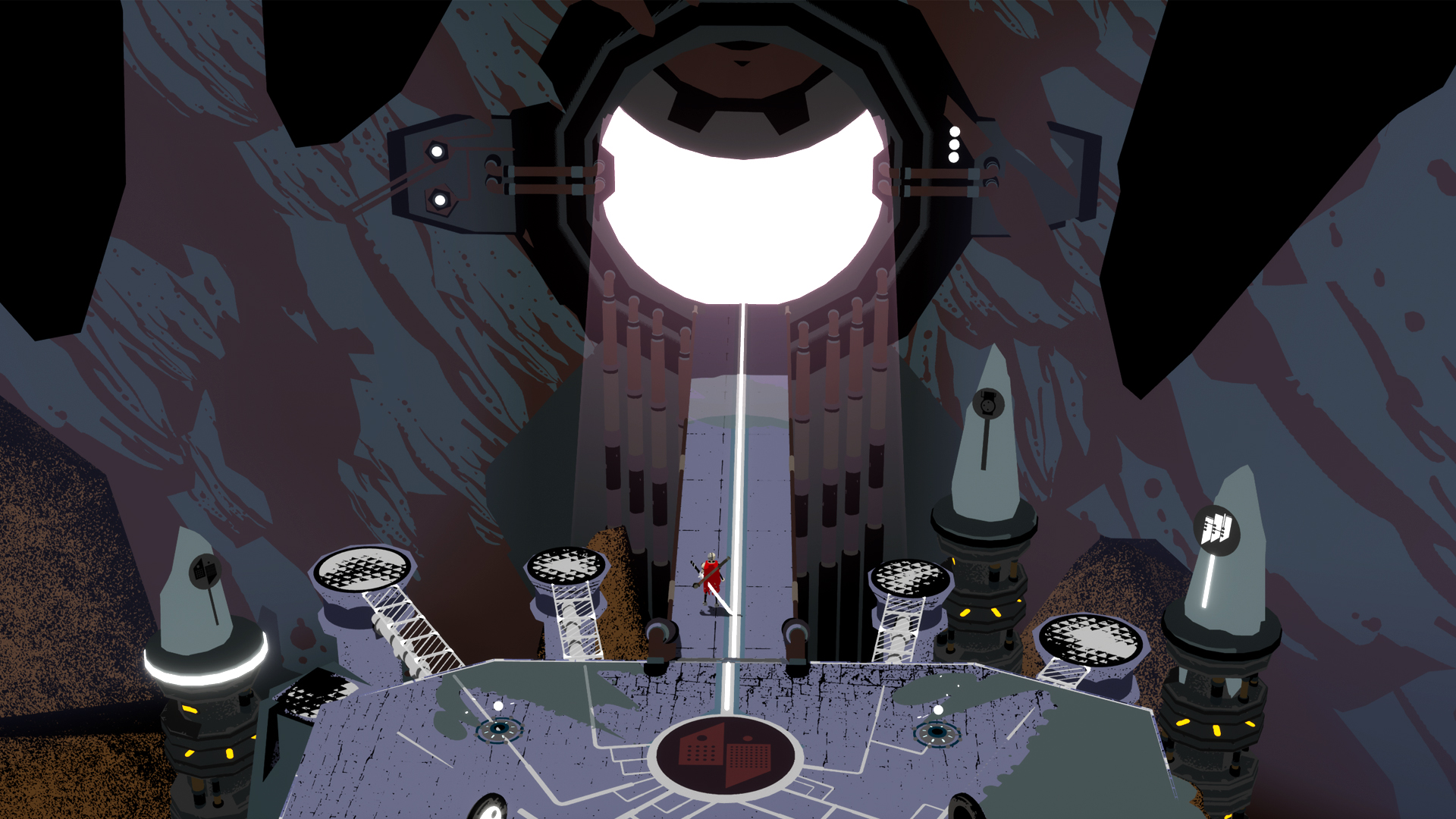 "I really liked Control – the way the sound design and music work together (and blend together) was important in reinforcing the character of the game."

What recent video games would you say have excelled the most when it comes to music, soundtrack, and sound design?

I really liked Control – the way the sound design and music work together (and blend together) was important in reinforcing the character of the game. I especially enjoyed the variable tempo stuff in the music being quite loud and proud at times.

Olivier Deriviere’s music for A Plague Tale: Innocence was gorgeous and really told a story. And to be somewhat biased, I thought the sound design for PSVR title Blood & Truth was cracking!

How much interplay is there in your conceptualization of a game’s soundtrack, and its broader sound design?

I think it’s really important to be as on the same page as possible with the sound and voice design. We may all be working on our parts separately but ultimately, for the audience, it all comes together as a single soundtrack. If we haven’t coordinated, then the sounds/music/voice compete and diminish the effect. At its simplest, it might just be making sure any tonal elements in the sound design don’t clash with the music. Beyond that, you want to avoid both trying to achieve the same thing – collaborating allows you to design moments where music or sound take the lead without fighting each other. That kind of interplay can make the soundtrack of a game much, much more effective.

What is a challenge you face when composing for games that our readers may not even know about?

A big challenge is making sure the emotional payoff happens at the right time in the music. In something linear, like a film, that moment always comes at the same time and you can build towards it for as long as you like or need to be effective. Music is often all about tension and release in one form or another – you build the tension and release it (often in unexpected ways) to elicit an emotional response (without wanting to sound too dry and analytical!). In a game, you may not know when precisely the release needs to happen, so you have to try and compose the tension in a way that is musically satisfying and feels that it is moving forward but is still flexible enough for its pay off to come at any time. I try to think of the music not being complete until the game is played – almost as if the player is performing it. In an ideal world the audience will have no idea that anything interactive is going on – it should seem like someone has captured their play through of the game and scored the music to that.

As someone who deals a lot with the audio aspects of games, what would you say are the areas where our industry needs to make the most improvements?

I’d love to see more sound designers given the space and time to really explore the emotional story-telling possibilities of sound. People are wise to music’s manipulation (although it still works J) but are far less tuned in to the subtle emotional direction of the soundscape. Non-literal sound design can be hugely effective, emotionally, but you need the space to experiment. The classic example is the culmination of a baseball movie, the hero needs to hit a home run to save the team/redeem themselves/complete their journey and this is their last chance – the camera pulls back and we see the pitcher release the ball. Our hero winds up – swings – and connects. The ball flies out of the park. If you put the actual recording of a baseball being hit it’ll be ‘physically’ real but weedy and unsatisfying. Put a recording of a large axe smacking into a tree and you get a solid, bassy wallop that sounds ‘emotionally’ real. The audience doesn’t question it and the sound reinforces the moment of power and conclusion. More time for people to do that please.

"[PS5’s Tempest] is exciting. Having worked a bunch on PSVR I know how effective binaurally positioned audio can be and I think it’ll inevitably make a big difference when that functionality becomes available as standard."

What are your thoughts on the PS5’s 3D audio engine Tempest? How much of a difference do you think that will make to the aural experience of games?

It’s exciting. Having worked a bunch on PSVR I know how effective binaurally positioned audio can be and I think it’ll inevitably make a big difference when that functionality becomes available as standard. I’m sure we’ll see the increased directional fidelity become a gameplay element, not just an atmospheric one. From using sound to pinpoint goals and enemies to who knows what!

What specific wishes do you have from the PS5, Xbox Series X, and the next Nintendo console, as far as sound and audio capabilities go?

Talking technology here, I’d love to see people experimenting with increased processing power to work on more procedural variety in music and sound to further tailor game soundtracks to the player at any given moment. Not entirely computer-generated music, but something that takes the composed and designed music and expands it to avoid repetition and create an even more immersive experience.