AO Tennis 2 Review – Not Quite An Ace

Big Ant Studios’ second attempt is more successful than the first, but not all is well on the courts.

While other major sports see yearly entries that keep fans coming back for more, tennis has had a less than stellar showing this generation with only a smattering of mediocre titles across all three major consoles. Developer Big Ant Studios aimed to improve the presence of the sport with 2018’s AO Tennis, and although I never got a chance to get my hands on it, it’s no secret that it was a colossal disappointment at launch. Though updates improved the experience for some, the game never managed to leave a lasting impression.

Not willing to back down from a challenge, Big Ant has decided to move ahead with the series despite its stumbles, resulting in this year’s simply-titled sequel AO Tennis 2. And while it seems eager to rectify some of the original game’s problems, there are a number of inconsistencies and game mechanics that bring down the enjoyment enough to make it difficult to recommend to anyone who isn’t willing to tough out the bad to get to the good. 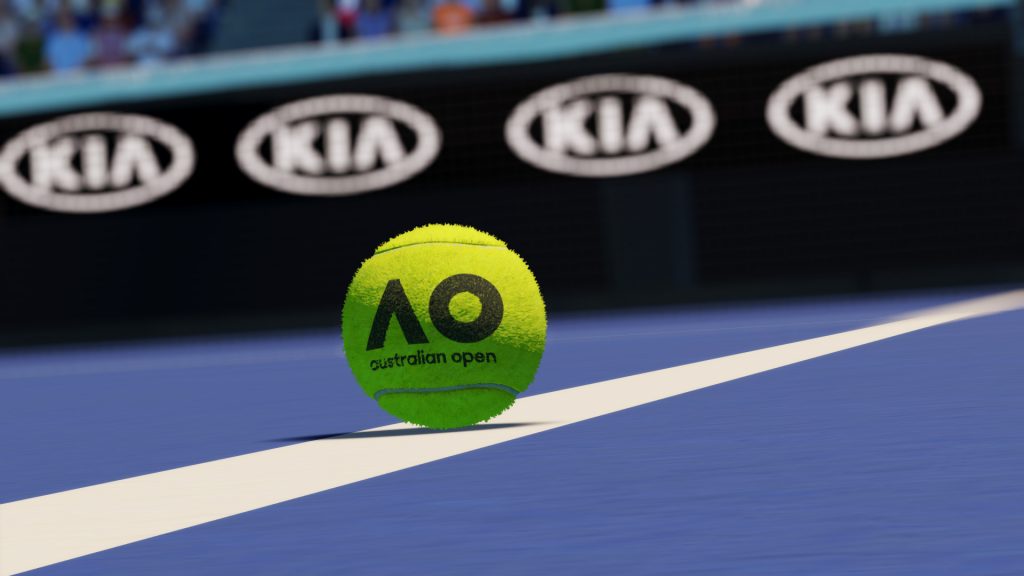 What makes or break a tennis game, of course, is its very fundamentals. It’s here that AO Tennis 2 both succeeds and fails at different aspects, nailing the sense of momentum and split-second decision-making of the sport while simultaneously convoluting the control scheme to the point of frustration. This is due to the fact that both player movement and aiming your shots are mapped to the left stick. This results in the game using a bit of auto-movement to take some of the micromanagement out of positioning your player, but it doesn’t consistently feel great in action since there really isn’t a clear indication of when your player switches from manual to automatic movement.

The steep learning curve rears its head when you realize that the game requires you to get good positioning, aim the ball, and hold your shot button just long enough to get an accurate return ­– all within the span of about a second or two. On higher difficulties, this leaves rallies feeling needlessly cumbersome, resulting in a never-ending feeling of just clumsily getting by. It might feel a bit like the tension of a real tennis match, but it doesn’t translate to being very fluid for the person playing. All of the tedium can be alleviated by bumping the difficulty down to the lowest setting, almost completely removing the need to prime your shots, but doing so ultimately has the complete opposite effect of making the game feel too easy.

I found Amateur difficulty felt both relaxed enough to enjoy and challenging enough to keep me on my toes in the first couple of hours. But even though moving across the court with fairly generous windows for priming my shots felt more empowering, it still never managed to feel as fluid as it should because the game sometimes just decided not register my movements – a problem I weirdly also encountered in World Tour Tennis a few years back – resulting in my player just kind of standing there like an idiot. This happened frequently enough to dampen my experience, and in a game where every point counts, it’s a completely unacceptable problem. 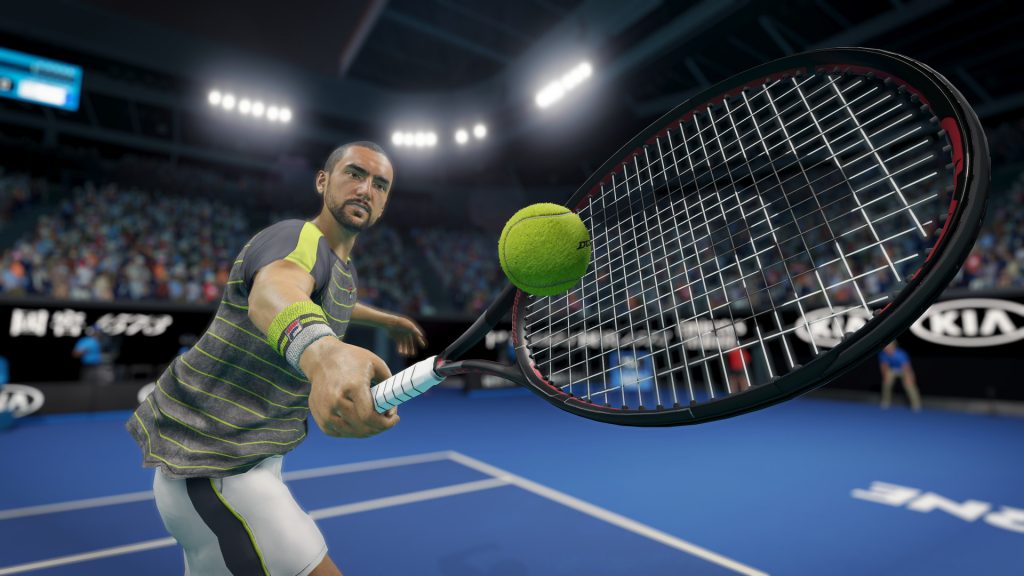 Despite these irritations, I really like the game’s simplistic assignment of shot types to face buttons that make lining up that a ferocious forehand with beautiful top spin feel satisfying. The game’s solid AI will absolutely run you back and forth with hard hits to the opposite corner of the baseline if you let them, so mastering the different shots is a priority right away. Nailing a perfectly-timed slice to give you some time to reposition can mean the difference between winning and losing a game. It’s quite easy to abuse the AI on the lower difficulties though – a fact that will delight or disappoint you depending on your idea of fun. Before I bumped the difficulty up to the third tier, I commonly won points by just pushing up to the service line after my first return and powering a flat forehand to whichever back corner the AI wasn’t occupying.

I was excited to see some of my favorite players and top seeds like Rafael Nadal and Gael Monfils were playable, but it’s a rather jarring experience to see some high-ranking players and not others. The underwhelming total lineup of 25 real-life tennis pros is missing many extraordinary modern players like Roger Federer, Serena Williams, Novak Djokovic, or Maria Sharapova. As fun as it can be to hit the courts with some of these guys and gals, it’s a real bummer you’re not given the opportunity to pit them against their most exciting matchups.

However, thanks to the game’s incredible player creation tools, someone with enough time on their hands has all they need to design playable characters that look identical to real players. As a matter of fact, the online sharing feature allows you to easily download characters made by someone else, and it’s already stocked up with plenty of lookalikes for popular missing players like Andy Murray and Stan Wawrinka. This immense level of customization for created players is staggering, and it’s certainly nice to be able to revisit the tools at any time to change things up as you’d like.

And you may find that you want to do that from time to time considering that you’re likely to be spending a lot of time with AO Tennis 2’s Career Mode. This mode is a joy to play, offering a diverse collection of tasks to complete, matches to take on, and sponsors to earn. When you’re not showing up to press conferences or running training drills, you’ll be tackling tournaments to earn money that can help you improve your player’s various skills. Maybe you want to be known for your deadly backhand, or maybe you want the kind of serve that makes people nervous; pump your favorite skills full of points and prove yourself to the world. 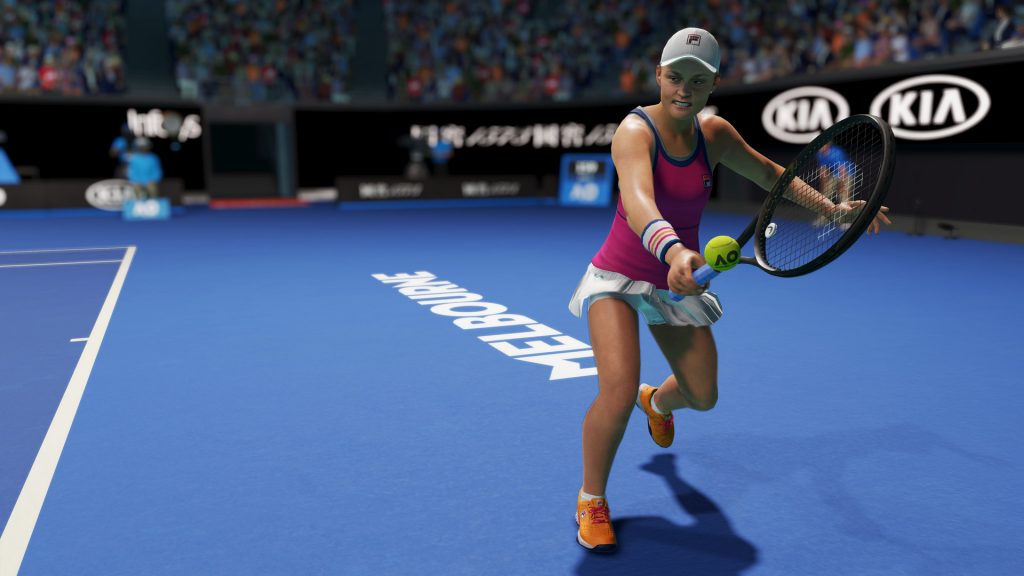 AO Tennis 2 also features a barebones online mode for those looking to take on other tennis fans. Connection issues seemed abundant during my time playing, and people left mid-game regularly, but I managed to have a handful of pleasant matches with a few friendly people. Sadly, I couldn’t find any custom matches, and the Quick Match option results in precisely that: very quick matches. So, while hopping online for some rallies with real people is a nice diversion, it’s hardly the star of the show.

That’s okay, though, because there are plenty of other modes to delve into, and once you adapt to the game’s somewhat clunky control scheme and figure out the right difficulty for your skill level, AO Tennis 2 begins to evolve into a pretty fun time despite its flaws. It’s not an exceptional game, and the steep learning curve is not going to appeal to casual tennis fans, but it’s probably the best tennis title you’re going to find this generation. I just hope Big Ant Studios manage to finally get everything right with a third entry in this series they’re clearly so passionate about.

AO Tennis 2 can be a hell of a lot of fun, but if you’re easily annoyed by some inconsistent controls and a steep learning curve, you’re better off avoiding this one.

A copy of this game was provided by developer/publisher for review purposes. Click here to know more about our Reviews Policy.
Tagged With: AO Tennis 2, Big Ant Studios, Bigben Interactive, nintendo switch, pc, ps4, Xbox One