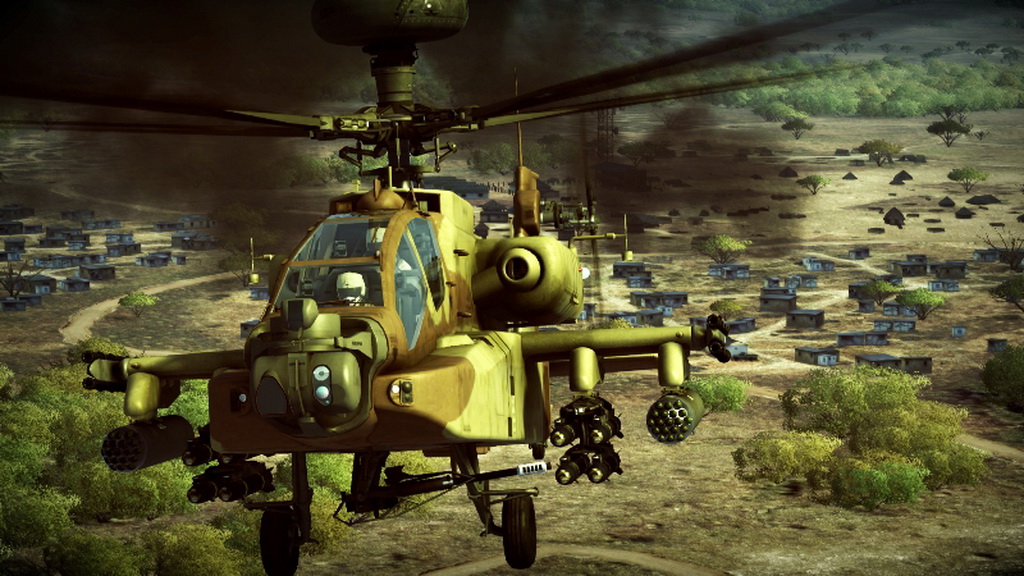 Apache: Air Assault is one of those game that fly under the radar when released, no pun intended.  But the title of the game says it right out, why this is different from any other flight simulator and that is because you are flying only choppers.  People that like flying the choppers in Battlefield: Bad Company 2 will love this game, because that is all you do.  While the controls can take some getting used to, I found them to be fairly easy to grasp, but I had my occasional crash.  I don’t even bother flying the choppers in Bad Company because I find them difficult to shoot and fly at the same time, so a Bad Company Chopper Veteran will be able to pick these controls up with ease.  I still found that firing between the missiles/turret and flying was a pretty good balance that didn’t overwhelm me like other flight controls have done in the past.  You can go into first and third person views as well as everything in between, whenever you want.

One of the coolest aspects of the game in my opinion was the co-op.  You can play offline 2 player co-op where one person is in the gunner seat while the other is flying with control of the missiles.  You can also take it online with 2-4 player co-op which is even more fun, when you have 2 choppers flying through mission with 3 of your friends.  Unfortunately there is no online versus mode.  Along with the co-op is of course single player and a free roam mode.  As fun as co-op is, playing single player gives you an AI gunner that is no dummy and can really help you out.  If you crash or you are destroyed you get a certain number of continues depending on the difficulty before the mission is failed.  The highest difficulty gives you no continues.  There are three difficulty settings; Training, Realistic, and Veteran while the physics as well as the flight dynamics are tuned to fit the difficulty you choose. 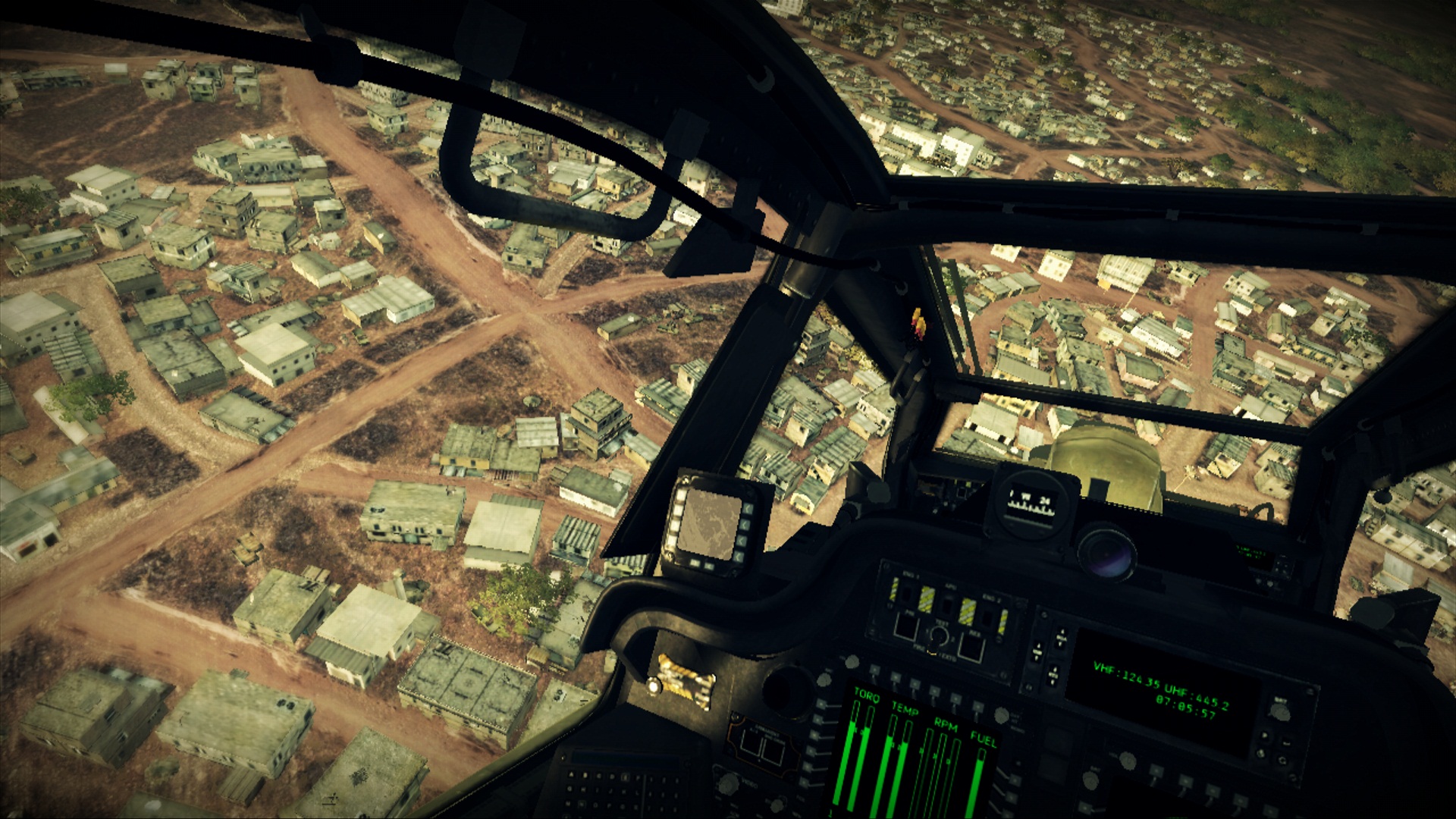 The game has a pretty cool aspect, when it comes to approaching and attacking in a scenario.  You can use real strategies, combat techniques and technology, used in the military to go about battle while you are given a large arsenal to choose from.  You can pick between many different choppers for each of the 16 multi-stage missions.  Right away you can choose to fly the Apache Longbow and Fire Scout as well as prototypes along the way that have not even seen real battle yet.  You can go into a Direct View Optics (DVR) view and the Forward Looking Infra Red (FLIR) view in the game which gives you more accurate shooting abilities, especially while hovering.  The DVR mode a greyscale view of the area that allows you to pick off enemies while zooming in and out as targets are highlighted.  FLIR mode is an infrared view showing you heat signatures that can give you the upper hand when troops are not showing up on radar, this mode picks them up by highlighting the heat they give off.

Gaijin Entertainment did a good job when it comes to the realism of the combat but the graphics when you see an explosion or the landscapes in the background could use a lot of work.  Outside of that, the graphics and detail put into the choppers themselves is great, inside and out.  There are leader-boards in the game where you can see global statistics or you and your friends.  There is also a mission re-play function that allows you to save a mission replay to view later.  You can also customize a chopper with up to 4 decals which seemed kind of lame.  Why not have more customization if they are going to put in the game in the first place. 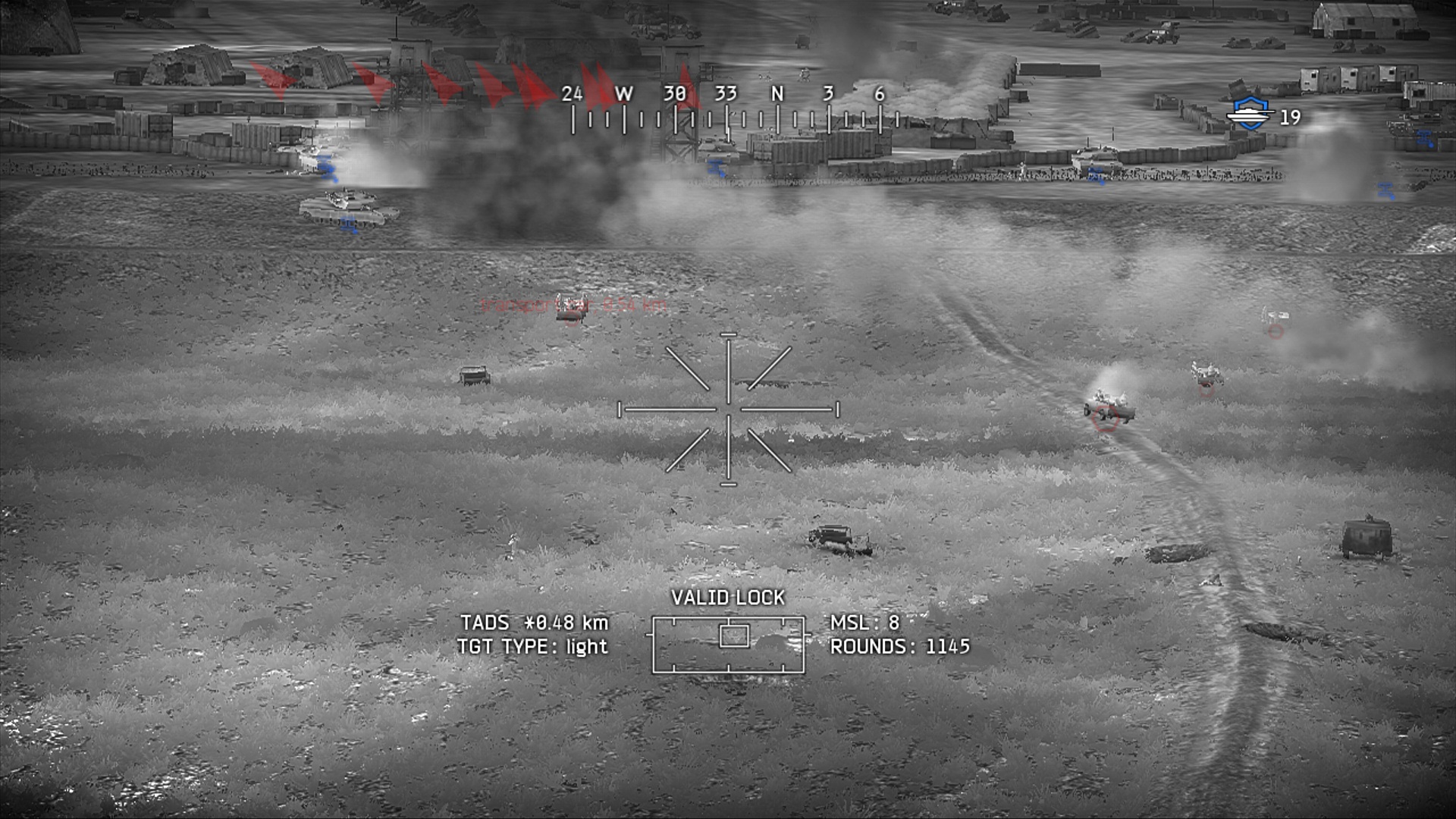 Overall the game is fun and is enjoyable for an under the radar game but flying choppers and only choppers over and over again can kind of get boring and you start to realize why games in the past have kept this feature to be only partial in their games.  With no versus mode the game does not have a lot of replay value but it is still fun.  I kept asking myself when will someone make a game like this (but with versus) and now that I experienced it, I enjoyed it but it’s not a must play game unless maybe you are a flight simulator junkie.  If this game adds some DLC with maybe versus it could open a whole new door for the game.

Choppers are heavily detailed inside and out according the that specific chopper in real life. Co-op is fun and always adds to a game while the Single Player AI is smart and actually useful.

Landscapes where not given a lot of thought in terms of graphics. While it seemed fairly easy to control the choppers in this game, they are difficult to a degree in all flight games and some players might have some trouble flying as there are no 'easy' flight controls. No versus Mode.

Final Verdict:
GOOD
If you always wanted a game like Battlefield: Bad Company but only choppers, you're wish has come true with Apache: Air Assault. In the game where you are always flying a helicopter and this flight simulator has gone into some great detail with the choppers.
A copy of this game was provided by Developer/Publisher/Distributor/PR Agency for review purposes. Click here to know more about our Reviews Policy.