Standard controls are X to attack and Y to evade unless otherwise tweaked (Xbox 360 Controls).  You can use melee weapons, ranged weapons or magic.  A good technique is to use a certain type of magic on an enemy and then use either a melee attack (Sword/Axe) or ranged attack (Bow/Crossbow).  You can also lock on to enemies whether using melee, ranged or magic attacks. The D-pad is basically your hot-key, giving you two layers of four items to have weapons and spells at your ready and the right bumper is used to view your active spell selection, which after chosen can then be cast by hitting the right bumper again. 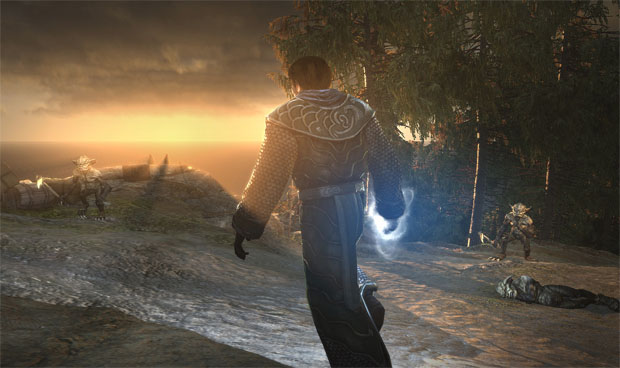 As you level up you will be able to charge all attacks to do more damage or do area of effect destruction also learning useful combos on the way.  All the combat is in real time which is how I like my RPG’s, with the small exception of being able to press start while in battle and use potions to heal yourself as well as switch up a few things to make a battle easier.  Upon killing an enemy you get exactly what that enemy had whether it’s a weapon or an animals meat that you can cook and eat later on. Loot drops seemed to be very rewarding at most times but the actual reward items themselves from doing certain quests seemed to be not as useful. The skill trees are broken up into archery, magic, and combat(melee) sub-categories which you can put points into anyone of these at any time with out having to commit to one. When it comes to spell-crafting, alchemy and potion-making it’s not hard to find raw materials strewn across the land and you will unlock spell-crafting abilities regardless of which path you decide to take your character down. 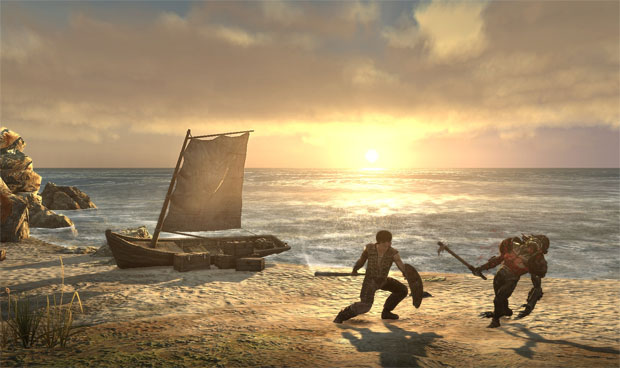 The game has an open world free roam system, meaning anywhere you can see, you can go provided you have unlocked the right quests to visit these areas.  Arcania: Gothic 4 will take around 35 hours to beat unless you plan on collecting everything as well as obtaining all the Achievements/Trophies, you could be spending up to 80 hours with the game.  There are over 100 weapons in the game such as axes, swords, bows and such.  When it comes to magic, there are three main spells that you will level up as you play the game.  Your hands eventually begin to glow with the “awesome power of magic”. 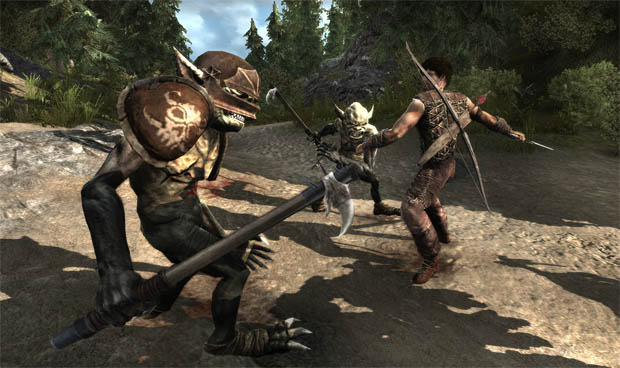 Where the game fails to give you a sense of a realistic RPG is that there are no repercussions for stealing or looting stores at all.  This takes away a moral sense that really adds to other similar RPG’s such as Oblivion and Fable.  The music in the game however is great while adding wonderful transitions as you enter and exit battle.  Graphics in the game are really beautiful at times when it comes to the scenery but some AI characters don’t exactly fit to par with the rest of the games graphics.  One down side is the voice acting at times seems to be not taken seriously as there are points in the game where the voice acting is just simply bad and takes away from the story telling.

The list goes on when it comes to level of things you can do in this RPG.  You can mine with a pick axe for materials.  You can notice AI side conversations that have nothing to do with you or your quests that adds that realism to an RPG.  Fast travel is a must in the huge world of Arcania: Gothic 4 with three islands with seven different areas that are unlocked as the story progresses.  The game is almost a cross between Oblivion and Fable with its own dark element added to make this game stand out from other RPG’s.

Great combat system. Classic RPG with a real time battle system. Musical score is great and the story is good for the most part. Scenery graphics are wonderful.

Voice acting is all over the place and can be bad at times taking away from the story. No repercussion for stealing/looting leaving morals out of this one as well as making the game a lot easier.

Final Verdict:
GOOD
Arcania Gothic is in its fourth series of games in the franchise with ArcaniA: Gothic 4 published by DreamCatcher Interactive and developed by JoWood Productions. This is a classic RPG that has all the elements RPG lovers need to have while giving it a combat system that is basic enough to not overwhelm the player with all the different attacks.
A copy of this game was provided by Developer/Publisher/Distributor/PR Agency for review purposes. Click here to know more about our Reviews Policy.