There’s something unique about the appeal of a well-made roguelite game, and developer Trickjump Games’ ArcRunner certainly seems to be making some interesting promises on that front. Combining a cyberpunk setting, frantic co-op action, multiple playable classes, and a variety of weapons, it certainly has the right elements in place to deliver the kind of experience that genre fans can never quite get enough of. Curious to learn more about the game and what’ll make it tick, we recently reached out to is developers with some of our questions. You can read our interview below. 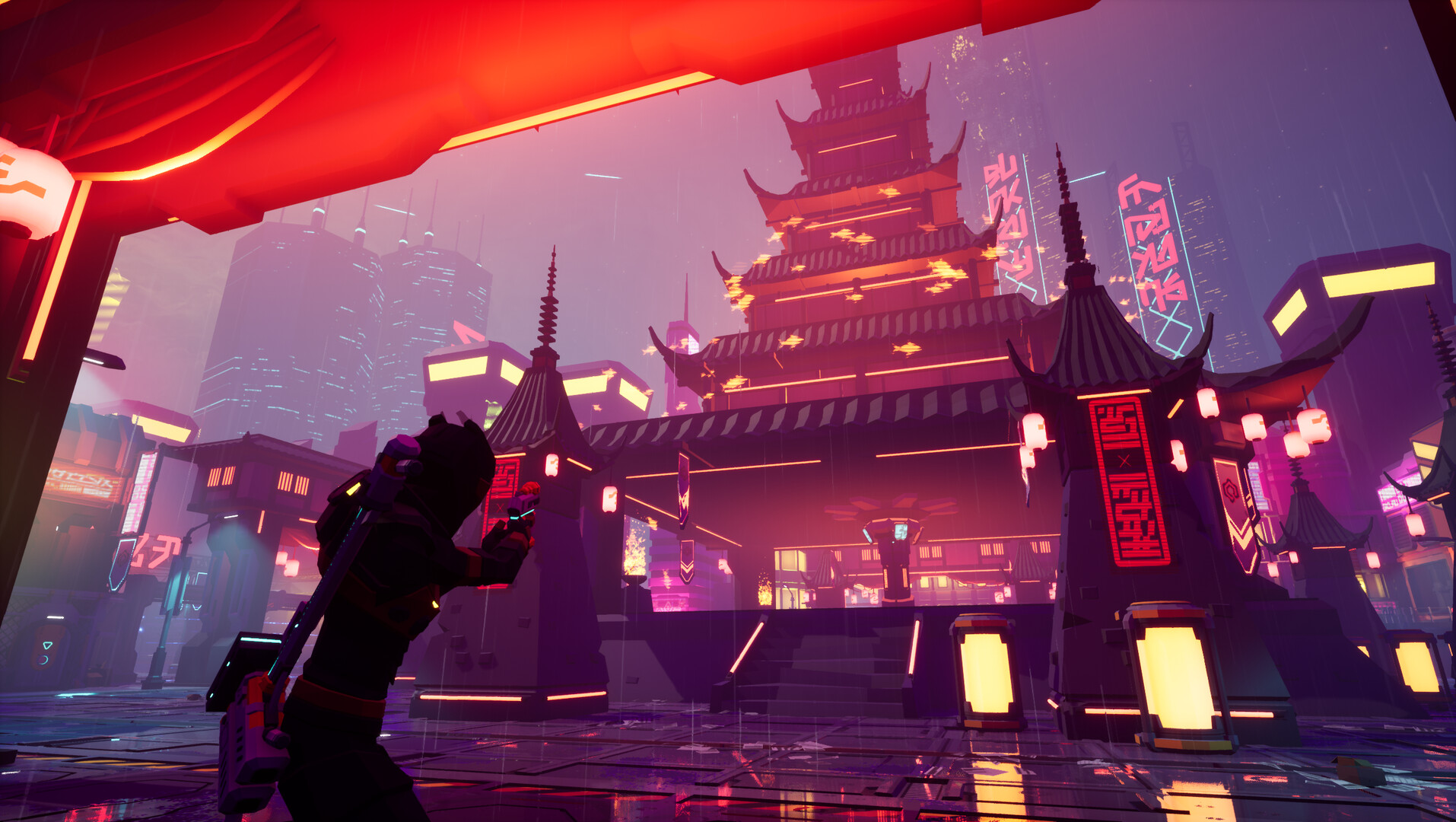 "ArcRunner’s visual style came about when we tried to imagine what would happen when two of our favourite things – cyberpunk and high-concept sci-fi – were blended together."

ArcRunner has a strikingly impressive visual aesthetic, one that instantly catches the eye. How did you land on this look for the game, and what was the process like of ensuring that the game’s technical aspects can properly bring your vision to life?

ArcRunner’s visual style came about when we tried to imagine what would happen when two of our favourite things – cyberpunk and high-concept sci-fi – were blended together. What would that look like? We also asked ourselves how these two fairly distinct genres could share some common ground – for instance how can a grimy rained-streaked cityscape exist onboard a futuristic space station – and this brought about ideas such as the rain that drenches the city actually being waste coolant from starships passing overhead.

Technically we leverage a lot of Unreal’s lighting and reflection systems to give the impression of atmospheric neon-soaked areas while still keeping the game performant. We come from a background of creating our own engine from scratch and that base has certainly helped us get the most out of Unreal Engine’s amazing graphical capabilities.

Given ArcRunner’s nature as a roguelite experience, how much of an emphasis does it place on things such as story and storytelling?

Considering ArcRunner’s fast-paced action and roguelite nature, it didn’t make a lot of sense to slow the player down with too much lore. Instead, we have a strong central narrative combined with a lot of environmental storytelling and cutscenes at key points to keep you directed at your goal. We wanted to give the feeling that you’re more of a relentless weapon aimed at a target than on an emotional journey. We don’t want to give too much away but there may also be a surprising twist at the end!

What can you tell us about ArcRunner’s three playable classes? Heavily significantly do the three differ from each other in terms of the playing style they enable?

Each of the 3 classes is very distinct: The Soldier is a more traditional “tank” with increased durability, an energy shield that can block and deflect incoming fire, and a range of augmentations that centre around absorbing and redirecting damage. The Ninja is more of a stealthy damage-dealer with a lethal Energy Katana, invisibility cloak and augmentations such as holographic decoys. The Hacker is our “cyber mage” who concentrates on syphoning energy from enemies and then unleashing it with a range of devastating abilities. We’ll also be adding new classes after release and we’ve got some great ideas for these. 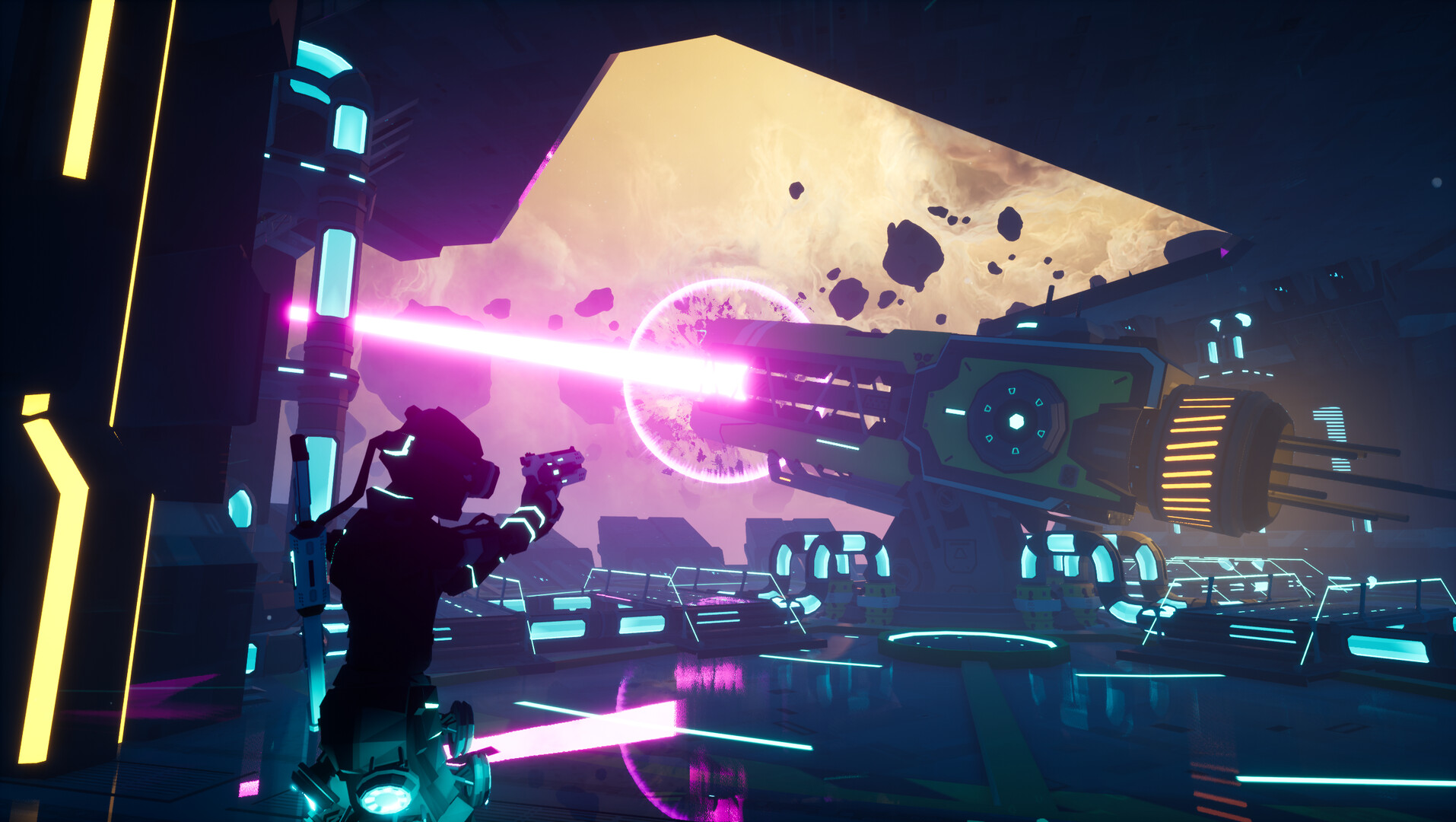 "Considering ArcRunner’s fast-paced action and roguelite nature, it didn’t make a lot of sense to slow the player down with too much lore. Instead, we have a strong central narrative combined with a lot of environmental storytelling and cutscenes at key points to keep you directed at your goal."

How many weapons will the game feature? How much will the weapons differ from each other in terms of abilities and play styles?

Currently we have over 20 distinct weapons in the game, and each weapon has a solid tactical function with many able to be combined together for added damage and effect. For instance, the Cold Fusion Gun freezes and slows enemies and makes them brittle and more susceptible to damage from other weapons, while the Disc Thrower fires deadly plasma discs that rebound from solid surfaces into nearby enemies.

How is ArcRunner approaching difficulty? What should players expect from the design and variety of the game’s enemies and bosses?

Being a roguelite we’ve spent a great deal of time and effort fine-tuning the difficulty curve, and we’re aiming for tough but fair. Each Zone features a complete set of unique enemies to fight with their own attack styles and weaponry – but each one can be successfully countered and dispatched with the right tactics. Each Zone also has its own randomised mini-bosses and ends with an epic boss fight against the zone’s Guardian. We don’t want to give too much away about these, but each one is completely unique and requires different tactics to fight and survive.

How much do the four playable zones in the game different from each other in terms of design and their visual style? How did you go about ensuring that each zone feels unique, especially given the game’s utilization of randomization systems?

Each Zone in ArcRunner is a different part of the Arc space station and its visual style, enemies and even atmospheric effects reflect that. The City is a grimy, rain-soaked metropolis filled with neon signs and holograms, while the Starship Docks are darker and more industrial in nature. The affluent open-air starscrapers of Eden are a stark contrast again – filled with waterfalls and carefully cultivated foliage. After ascending the Dorsal Elevator players must fight through the almost Tron-inspired Core where the robots and machinery that drive The Arc are manufactured.

The game uses a directed procedural generation system to give new level layouts each playthrough, but we’ve gone to great lengths to ensure that the levels produced are still fun to play and don’t end up becoming dull, empty and lifeless.

Progression can be a tricky thing to balance for roguelike games in particular. What is ArcRunner’s approach to progression, and how does it balance short-term run-based upgrades with longer-term overarching ones?

In ArcRunner you start each new run in the Cryochamber in a fresh android body. After clearing a level, you enter the Autodoc where you can choose one of four randomly selected Augments to install – or alternatively upgrade a previously installed Augment. With over 30 unique Augments this leads to some very different playthroughs and combinations.

Completing a level also rewards you with Nanites – our meta-currency – which you can spend in the Cryochamber on permanent upgrades at the start of your next run. Extra Nanites can also be earned by completing random challenge areas scattered throughout the Arc and by defeating bosses and mini-bosses. 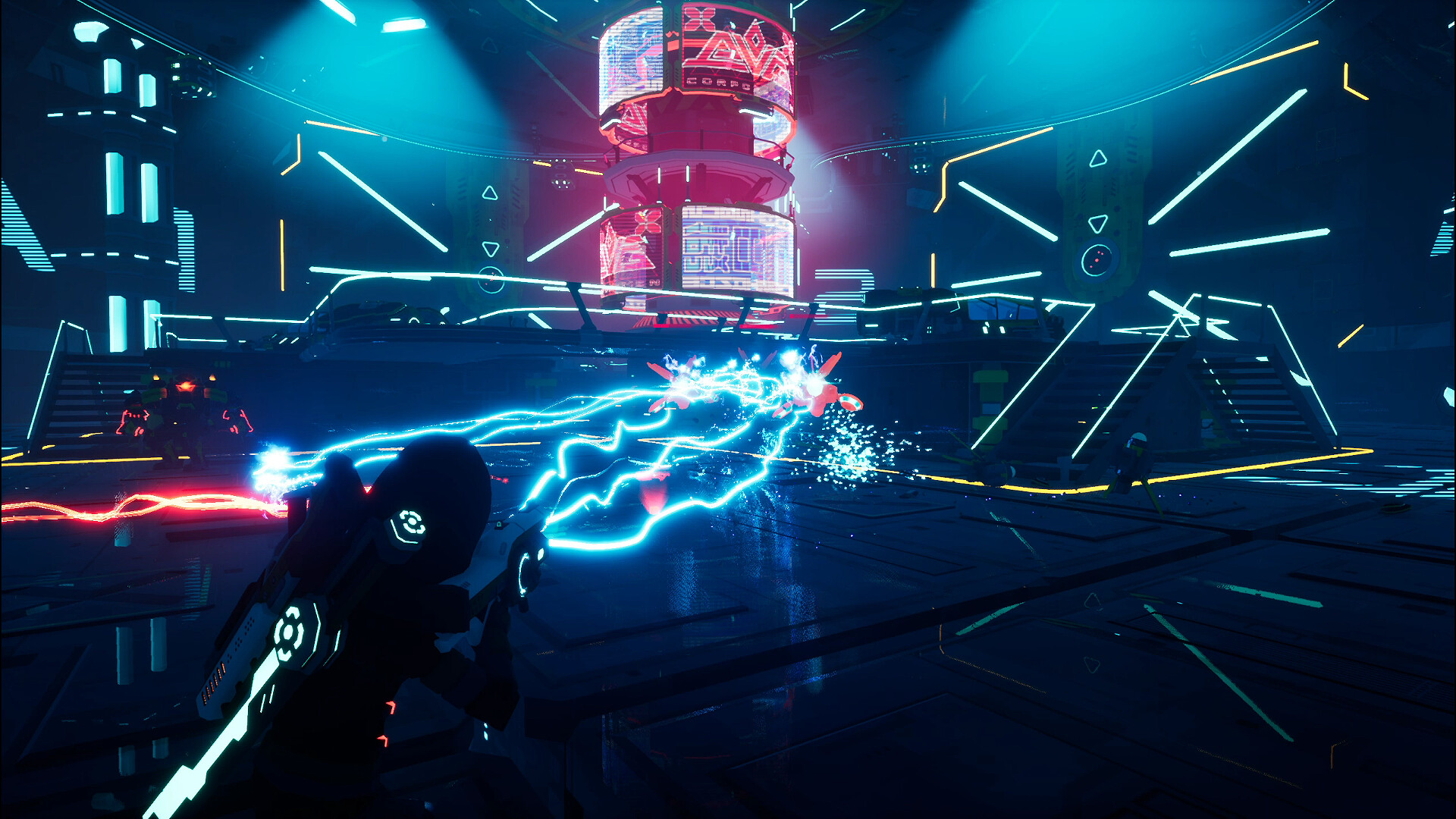 "Currently we have over 20 distinct weapons in the game, and each weapon has a solid tactical function with many able to be combined together for added damage and effect. "

Given the fact that ArcRunner also features 3-player co-op, how does the game’s difficulty scale based on how many players are playing together?

We’ve gone for a tailored approach in co-op where each zone’s enemies will not only scale in strength and damage but also add new attacks as more players join. Bosses and mini-bosses will also add new attacks as well as gain additional supporting enemies the more players are present. Another major difference is that in co-op play you can be downed and revived by team-mates leading to some great clutch situations!

WIll ArcRunner support cross-play for its co-op?

We’re currently looking into cross-play and this may not be a feature at launch – but is certainly something we’d like to add.

Do you have any plans to support ArcRunner with additional post-launch content, such as new zones or classes?

Both platforms provide excellent performance, and provide a great base for developers to create the next generation of games – the additional TFLOPS do help with some graphics calculations, giving us a little more breathing room from an optimisation standpoint to focus on other areas that need our attention and giving us a little more budget to add some effects at higher qualities.

The extra bandwidth is incredibly useful – it allows us to increase loading speeds, take advantage of lower memory pressure and optimise our game to perform well under load – that said, the Xbox’s speed is still great. Both consoles benefit from a good amount of RAM operating at very fast speeds, so provide great benefits for level streaming and large texture sizes. 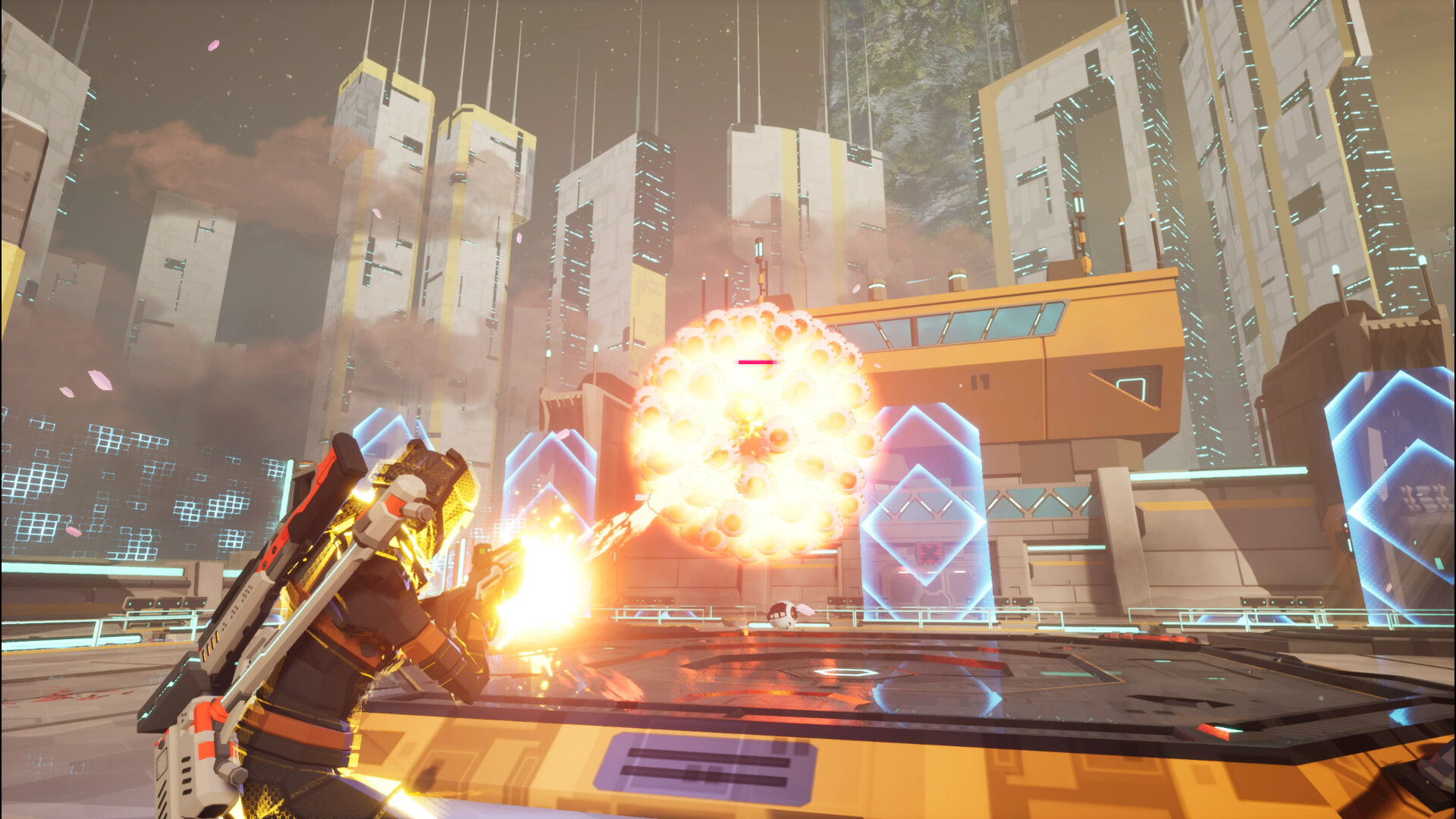 The benefit of the additional performance on the CPU in the Xbox Series X is a nice plus. It helps especially with core engine simulation, such as physics and other critical work. The difference between a 3.5GHz and 3.8GHz isn’t much in practice though, so it mostly benefits in providing a more stable framerate, especially when tackling single-threaded tasks.

The Series S is a fantastic console – newer titles will need to make concessions and optimisations to ensure it runs at the same frame rates as the Series X and PlayStation, but it is by no means out of the running. It still performs competitively on various current generation titles, and a lot of excellent work from teams across the industry regarding optimisation and QA ensures that the end-user experience isn’t compromised.

We absolutely love the Steam Deck and we will be fully supporting the hardware either at launch or directly after. It’s a fairly powerful little piece of hardware so we don’t think any serious compromises will be needed to give players a great experience.