Purely made for co-op action.

I am a firm believer that co-op can make any game fun to play. The one in Army of Two: The Devil’s Cartel is quite addictive and simplistic in its implementation, but it could have been a lot better. The game should only be played with a friend or with strangers over Xbox Live, because that’s what gives this game its identity.

You will shoot a lot of people here, and I mean a lot of them. There’s mindless violence and gore, and considering the target demographic for this game, EA couldn’t have wanted anything less. That feeling you get when you use the shotgun with Dragon’s Breath attachment and blow away groups of enemies, is a sublime and exhilarating thing to witness i.e. if your brain is wired to enjoy things like that. It’s a shooting game at its core and that’s what you will do here througout the campaign. Everything else is forgettable to simply awful. The production values aren’t that great, with screen tearing, bugs and glitches galore. There’s a 1.5 GB HD texture pack you can install when you boot up the game on Xbox 360, and it’s highly recommend you do that as it improves the visuals quite a bit.

I have to admit that I was expecting this game to be really bad; devoid of content and soul, but it managed to surprise me. I had a blast playing this with my friend and the game most definitely lives up to its title. It is quite lengthy too, and it took me approx 11 hours to clear it on the normal difficulty.

The protagonists of the last two games–Rio and Salem–play a side role here but they are vital to the story. The new guys do not have any personality and are poorly written, but I guess even the developers didn’t want to waste too much time with these guys. The masks are there for a reason, you know. 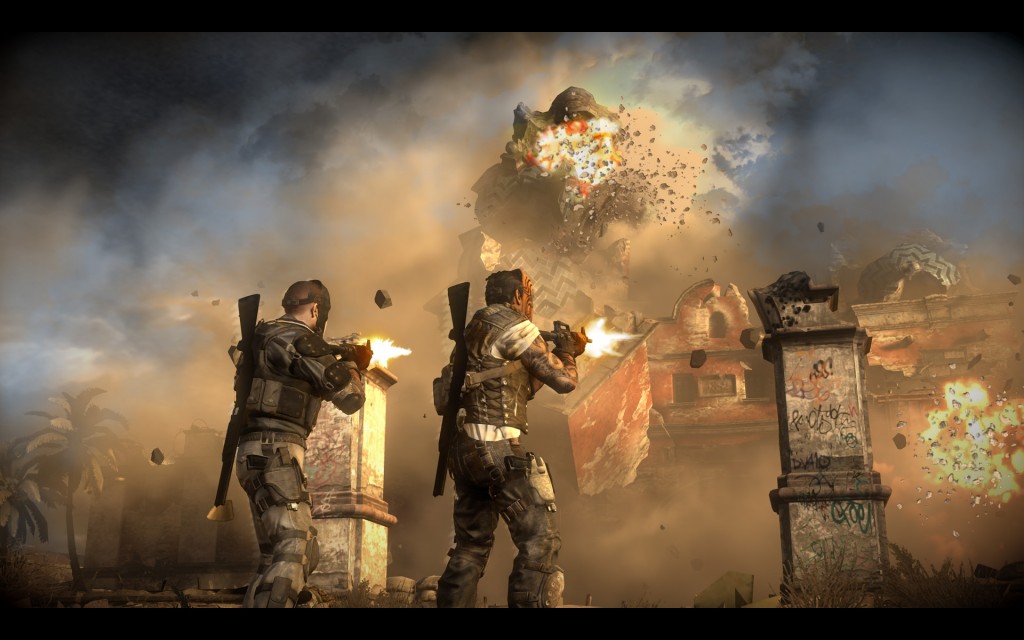 You face off against a cartel called La Guadana and the game is set in Mexico. The entire motivation to mow down hordes of bad guys that come in all shapes and sizes isn’t that strong, but when you dismember people with a shotgun, you don’t need any solid reason to shoot them. There’s kind of a sadistic pleasure in shooting a guy rushing at you with a knife.

The co-op mechanic is pretty simple as I mentioned above. You don’t interact with your partner much except when you need him to open doors or climb a ledge, and in a way, that’s a really disappointing thing as they could have at least made it interesting. It would have been cool to share ammo or even the mechanics from the first game could have been included here.

The game looks decent visually, and the HD texture pack does make a difference on consoles. It also runs on the Frostbite 2 engine but it kind of looks like a generic Unreal Engine game in places. The destruction on offer here is quite good and really does enhance the whole shooting bit. Nothing like spamming bullets down a hallway killing tons of bad dudes. It also makes you feel like a bad ass, and I guess this is one aspect of Frostbite 2 that really stands out in the game. 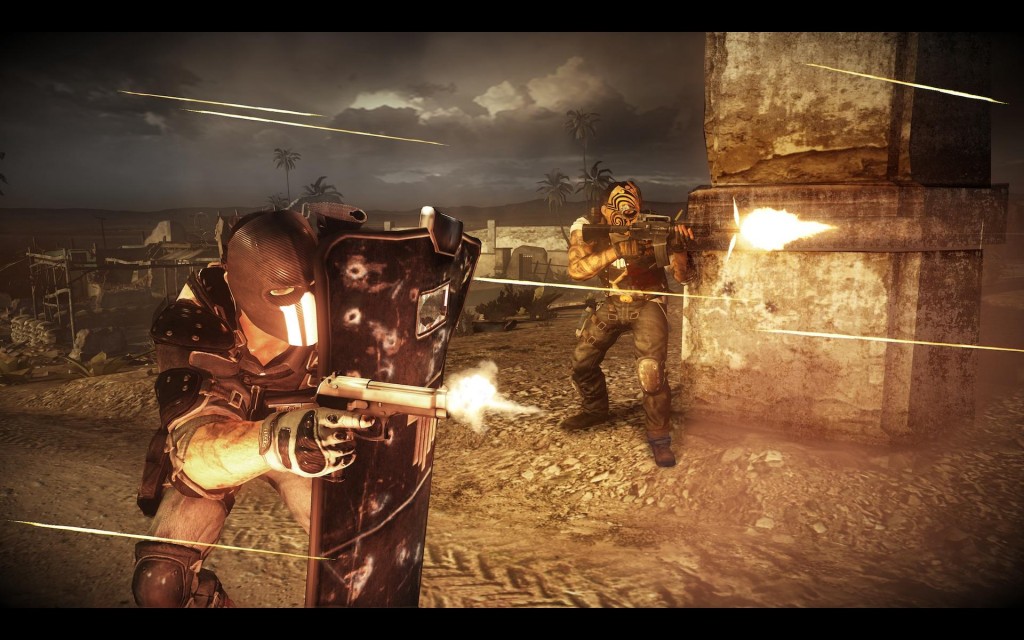 It’s colourful, too, and you mostly progress in a linear fashion, breaking down doors and facing groups of enemies at regular intervals. You can customise your loadout and gear, and they will be shown during cutscenes as well, so that really makes your character stand out quite a bit.

The netcode is very good and I hardly faced any lag–even during scenes with a lot of action. However, the framerate did drop to single digits during some cutscenes. It’s not an issue during gameplay as it maintains a decent framerate till the end.

There isn’t a competitive multiplayer mode, however, you can replay the campaign at higher difficulties to make more cash and buy whatever you need–weapons, gear, tattoos and other things. 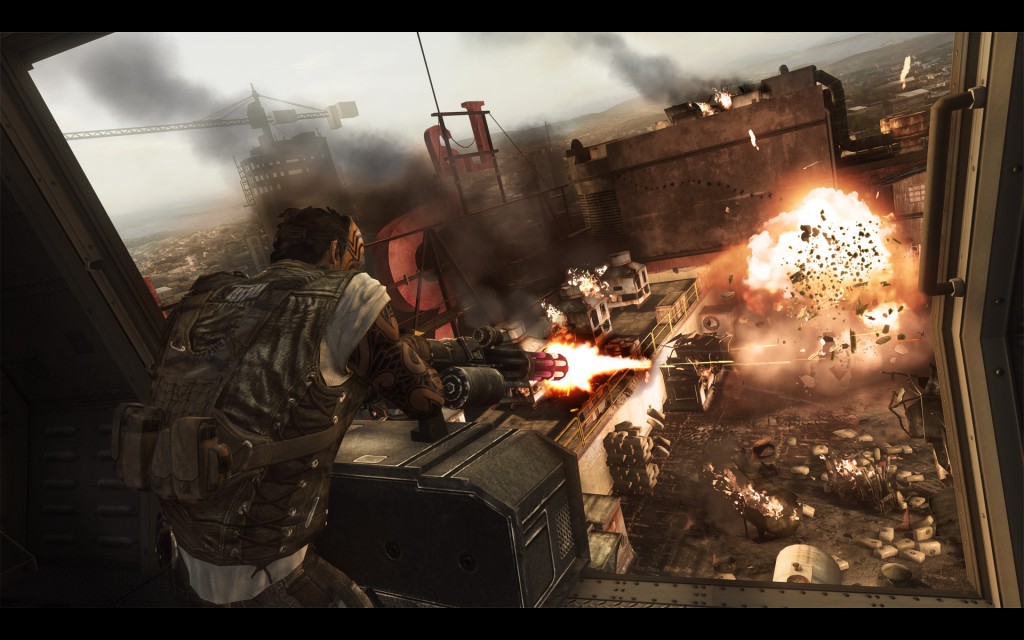 My save file was corrupted for some reason and was reset to level 1 after beating the final boss. Apparently, disconnecting from Xbox Live while the game is saving can do that. It also did manage to kill my motivation to replay this game, though.

The checkpoint saves are also really annoying as a disconnection means having to replay the entire thing after the recent checkpoint again. There’s a chapter select option which is a life saver during co-op for people with flaky connections.

The co-op mechanic is the only saving grace of the game, but it’s still not enough to justify full price. There’s definitely some fun to be had here, but one has to wonder why this game was made in the first place.

The co-op implementation is simplistic. Production values could be better. Generic. Lack of competitive multiplayer. Replayability.

Final Verdict:
GOOD
Army of Two: The Devil's Cartel does not justify its price tag due to a serious lack of varied content, however, the game is fun and some people would probably be satisfied with that.
A copy of this game was provided by Developer/Publisher/Distributor/PR Agency for review purposes. Click here to know more about our Reviews Policy.