Posted By George Reith | On 08th, Apr. 2011 Under Reviews | Follow This Author @GNReith

It’s always interesting to see how your favourite genres within gaming fare on the next generation of hardware. It is thus with a sense of relief that the 3DS sees its first major racing game, Asphalt 3D, come out as a success story. With its sharp visuals and heart pumping speed, Asphalt 3D is one of the stronger games of the 3DS’ eclectic launch line-up.

Asphalt 3D is a continuation of Gameloft’s Asphalt series, which in turn plays a lot like the popular Burnout series. Not content with the world of mobile phone games, Asphalt now bursts onto the 3DS trimmings and all. The main racing mechanics revolve around nitrous oxide boosts that you can earn by performing stunts such as drifts, jumps and near misses with other vehicles. All races take place on open roads with civilian traffic that, despite being somewhat sparse, adds an extra layer of challenge to the gameplay. If you collide with too many civilian vehicles you’ll also find the police tailing you and generally making your race that little bit more difficult. The fast speed and tight turns help Asphalt 3D to be a shining example of what arcade racers should be. 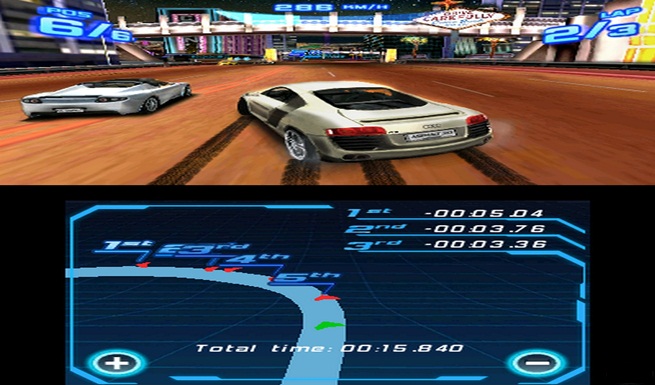 The game is split between a multitude of modes that you aim to complete as you advance through the game’s career mode. It’s a shame then that the first minor blemish on Asphalt 3D comes to the fore at this moment, as the game modes lack much in the ways of meaningful variation. You have your standard race modes that require you to come as close to first as possible. You then have time trials that also need you to go fast. Leader of the pack kicks you out of the race if you’re in last place, again needing you to go fast. Some modes include police or require you to ram certain targets off the road, but this differentiation is meagre at best. It’s a good thing that the standard racing modes are so fun regardless, but a bit of variety would’ve gone a long way.

Though the game types are lacking in content and variation, the cars and courses side of things is ridiculously well catered for. Over forty licensed vehicles grace the game’s roster, along with a few bikes for the unconventional racers out there. Combine this with a series of tweaks that you can make to your vehicles that you can purchase with your career earnings, and you have a real time-sinker for any serious motor heads out there. Constantly upgrading your vehicles, in conjunction with gaining experience points from your races, gives the career mode a good sense of progression. There are also a lot of tracks to race around, seventeen in total, each with their own series of short-cuts and side routes. Adding to the already massive pile of content is a fairly robust multiplayer mode that caters for up to six players via local wireless play. It may be packed onto a small cartridge, but this doesn’t impact at all on the vast abundance of content in Asphalt 3D. 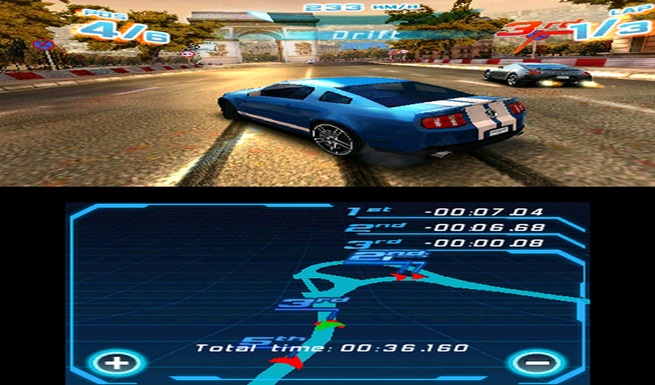 For a small machine, the 3DS packs quite a graphical punch and Asphalt demonstrates this effectively. The cars and levels have a pleasing look about them, and the whole affair runs at a usually steady frame rate. The main issue with the animation side of things comes in the game’s collision detection. Whether it’s jumps, scrapes or head on crashes with other vehicles the whole thing just seems sloppy. It isn’t a game-breaking fault, but it seems a shame that dodgy collision detection would let down the usually smooth and satisfying gameplay. It also doesn’t help that the soundtrack is a complete mess of clichéd techno. Thankfully that volume slider on the side of the console goes all the way down to mute. Speaking of sliders on the 3DS, you’ll be pleased to know that it will be worth throwing the 3D slider on the system all the way up for when you play Asphalt 3D. The stereoscopic effects look a damn sight impressive and add a pleasant depth to the adrenaline fuelled races in Asphalt. 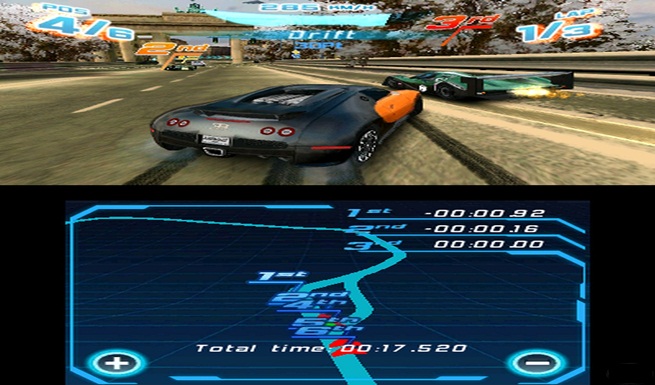 It has a few rough areas, but Asphalt 3D is a stellar example of how well a 3D arcade racer can work on the 3DS. With its sharp visuals, satisfying 3D effects and heart-poundingly fast races, Asphalt 3D is a robust and highly enjoyable handheld racing experience. If you’re into your racing titles, or are generally dissatisfied with the other launch titles for the 3DS, then consider Asphalt 3D a priority.

Gets repetitive in long bursts, Not a huge variety in the game modes, Poor soundtrack, Collision detection issues galore

A copy of this game was provided by developer/publisher for review purposes. Click here to know more about our Reviews Policy.
Tagged With: 3DS, asphalt 3d, Gameloft