The odds are stacked against you Assassin’s Creed: Bloodlines. Though Assassin’s Creed was successful if repetitive on the PS3, 360, and PC, it was far from perfect. Now it seems like Griptonite Games is taking the franchise in a direction it didn’t need to go, backward. Bloodlines offers nothing new but portability and takes away almost everything that made the first game fun at all.

The story takes place after the first game with Altair now going after the remaining Templars in Cyprus. You will be hunting down and killing the remaining generals one by one across a few similar looking locations. The story is only mildly interesting if at all. Any story elements boil down to similar sounding conversations leading to similar mission types. You will either be stalking people, interrogating people, or killing people, neither of them are any fun though. The game requires absolutely no stealth as you can easily slaughter every guard on the way to your objective faster than you can hop across the buildings.

Speaking of slaughtering, that will be what you spend most of your time doing, the enemy guards are incredibly easy. Most of the time you’ll end up being spotted for the most ridiculous reasons, so you better get used to four button presses per enemy… yeah it’s that easy. All you have to do it hit any non boss four times with your upgraded weapon and they will die, no matter what. On top of that enemies are just as predictable as the first game so they are easy to beat to begin with. 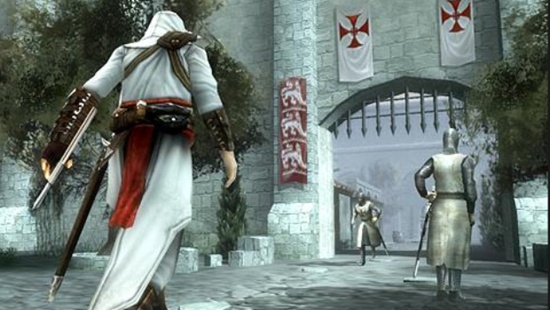 Oh I forgot, there is some green in there.

The game will only run about 4-5 hours but that’s if you take your time. Assassin’s Creed: Bloodlines has nothing interesting going on outside the story to keep you away from it, though you will wish there is. If you really wanted to you can do two familiar side missions in each area, rescuing people from the Templars in the streets or killing someone for a random person. There is also Templar coins scattered around the world. These are much easier to find than flags and act as money to buy your upgrades. Between missions you go back to the Animus and can upgrade your equipment or leave the awful game. If you choose the former then you will use those coins to buy upgrades like health, weapon damage, and more knives just to name a few. You don’t need any of these because the game is so easy you probably won’t take much if any damage.

You will go to three different major areas, but all of them look the same and all of them look very bland. The game looks decent, but that’s not hard when your environments are all white and gray. The areas are also very small. You could cross any given square of territory in a few seconds. There are four or so squares per major area. Bloodlines just screams repetitive, so much that it makes the first game look like the menu at McDonalds. If it’s not the environments it’s the missions or the conversations that always sound vaguely similar. It is a huge step back from the direction the franchise needed to go in, and the excuse that it’s a PSP game doesn’t cut it anymore. With companies like Square Enix releasing fantastic fighters and full scale RPG’s on the PSP there is no excuse why this game couldn’t have progressed the franchise.

Altair still has the ability obviously to climb stuff, but it can lead to more problems than good. Sometimes Altair has a hard time grabbing the certain ledge you are going for or doesn’t jump when you want him to and will often lead to you dying. Also jumping into some buildings will glitch the game and you will pass through the wall into nothingness. If you still want to play after that you’ll have to restart the game. You’ll also find random A.I. people getting stuck on and walking into walls frequently. 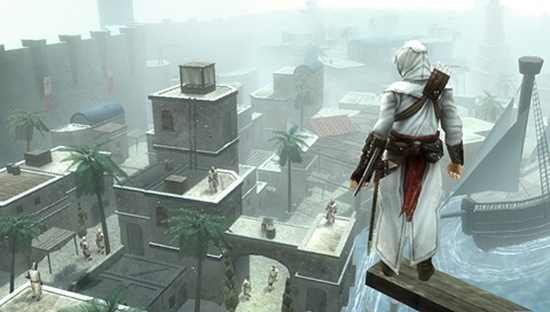 This screenshot makes the game look cool… it’s not.

The way that people react to your actions in the city is funny at first, but when you get down to it, it sounds like a terrible play-by-play of people wondering why you are using conventional means of travel. For example, apparently people in the city don’t know what a ladder is because every time you climb one people say “What is he doing?” as if to say “WTF way is he using that conveniently placed ladder to get the roof?” I wonder what happens when a roof has a leak, when the guy goes up to fix it do people yell “What is he doing?” or better yet “Hey you get off my roof!” Seriously I can understand being confused about a guy scaling the side of a building, that’s suspicious, but a ladder? You have to be kidding me.

Oh and don’t get me started on running. I swear the first time I heard this I laughed hysterically, but that is only because it is so stupid. While running through the city I heard a woman say “Why isn’t he walking like the rest of us?” The answer, ummm because walking sucks. These people are deprived I tell you, they must not know what running is. That or it’s the Templar no running law, I don’t know and quite frankly I don’t care. Speaking of the Templars, they must be really paranoid after the first game because if you so much as disrupt what I have come to call their “Danger Zone” they will just attack you because “He is infiltrating my Danger Zone he must be an Assassin.” Oh and if Templars see you running, they know you are an Assassin, I guess only Assassins run. I’d like to get from point A to point B anytime soon. I think all of these people are jealous of my physical fitness, haters!

Assassin’s Creed: Bloodlines is a broken and boring game that fails to do anything for the franchise other than make it portable. The Bloodlines isn’t worth the $40 to play it and if you do desperately need to play Assassin’s Creed on your PSP, there is probably a different game that’s similar but will offer an overall greater experience. There just isn’t anything to sell here. It’s a bad game that fails to be any fun 95% of the time and any fun will quickly fade away. Do yourself a favor and stay away and tell two friends, then they’ll tell two friends and so on and so forth.

Assassin's Creed: Bloodlines is a very poor attempt at bringing Assassin's Creed to the PSP and only succeeds at being more boring and repetitive than its predecessor.

A copy of this game was provided by developer/publisher for review purposes. Click here to know more about our Reviews Policy.
Tagged With: Assassin's Creed BloodLines, psp, PSP Go