If the single player mode can hold on its own, Assassins Creed Brotherhood with its amazing multiplayer experience could be a big contender for this year’s game of the year.

So recently I got a chance to play the multiplayer beta of Assassins Creed: Brotherhood and let me start off by saying this, if the single player can hold off on its own, Brotherhood might be a very strong contender for the game of the year since the multiplayer is nothing short of spectacular.  After waiting long hours of downloading and installing the beta, I finally jumped in to the game.

The multiplayer starts off with an optional introductory session. The session is optional and one can skip and go ahead, but we decided to take a shot at it. So the introductory session began with a voice over telling the player about a few major game play elements. There are a few things that the player must be aware of and one of those is the compass. The compass shows the direction you should move so that you can reach the assassination target. But it’s not an age old simple compass where there is a just a pointer. Ubisoft have taken it a step ahead by treating the compass as a meter. When you are far away from the target, the meter will be slightly filled and that particular section of the compass will point towards the target. As you reduce the distance between the player and the target, the meter will fill entirely indicating that you are very close to the target. Next up is the score meter. As you close in to the target, this meter will be full. But if you make any unwanted gestures like run madly towards the target, the meter will drop down. The more the meter drains, the lesser the score the kills will earn you. 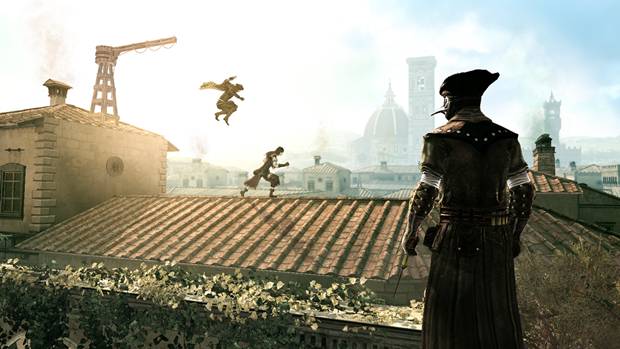 In the multiplayer, one of the things that the player needs to understand that the games play revolves around the concept of The hunter and the hunted. We tried our hands on with the Wanted Mode which then opens up to a screen of characters that you can select. We tried different characters under the impression that each character will have something unique to offer. But we were a bit disappointed that other than the assassination weapons and the scripted events which get triggered when a kill is done, none of these characters are actually different. However that is the ONLY disappointing thing about the beta and a few players should not mind that due to awesome game play that is in store.

So, after selecting your character, the game begins with a ten minute dead line. During these minutes you have to carry out maximum kills so that you can top the leader board. As I said, the theme of the multiplayer is that you are the hunter, but you might also be the hunted. With the help of my compass I am now able to pursue my target. Now the interesting thing to note here is that when you start the game you start off with no extra abilities, like for example you can’t sprint faster. All the new abilities and more can be unlocked by a highly addictive level up game play and this is where I think the beauty of the multiplayer lies. Obviously you can level up by carrying out kills. Now Ubisoft have made sure that killing is awarding as well. It really depends on how the player wants to carry out an assassination. One can be silent, aggressive etc, based on which you will be awarded certain number of points. Levelling up will unlock new abilities. This is where the multiplayer truly shines. One of the early abilities that I gained was the disguise mode. Using this I can fool my target in to believing that I am just one of the other characters, and not the assassin. However once initiated your cover will blow in a few moments. So use it wisely. As you level up, new abilities like smoke bombs, hidden gun and the ability to morph within a crowds will get unlocked. 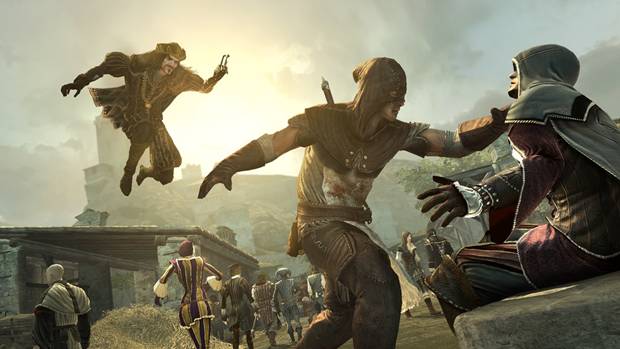 You are not safe throughout the session

Coming back to kills. As I mentioned before, the killing system is very unique and Ubisoft has made sure that no two kills are similar. You can assassinate your target in a number of ways. Some of them are:

These are just one of the few types of kills that are available in the multiplayer.  Now let’s talk about a scenario when another player is behind you, wanting to kick your butt! I am glad to report that Ubisoft have implemented this feature extremely well. Once you become the hunted obviously the first task is to get your ass running. If you are too close to your pursuer you can shook him off by using the ‘O’ button or if you are at a higher level, use a smoke bomb. Now just like in the previous games, whenever the protagonist will chase down his enemy, the enemy will block his path by using the obstacles. Now you can do more. If you are the hunted, you can obviously use obstacles, but you can also hide in hay or morph in the crowd. Now since the crowd looks and feel similar to you, it’s easy to fool your pursuer. But hold on a second, if you think it’s that easy, then think again. The pursuer can lock you which mean an indicator will be attached to you giving away your position. Now I found it extremely difficult to break out of this but fortunately I found a few ways. One of them is obviously run as fast as you can and break the line of sight. As I mentioned earlier that the depth of the point system is amazing. You are also rewarded when you are being chased down. For example you will be rewarded if you managed to escape or had a close call with your pursuer.

This never gets old

All said and done once the ten minutes are over; the game will revert to the session leader boards. Here again you will be rewarded with points based on what position you are placed in. All in all we are very pleased with the beta and I personally can’t wait to get hands on the final version. It will be interesting to see what more improvements Ubisoft can do in the retail versions.

Stay tuned with GamingBolt for a full review of the game soon.