Complete Assassin's Creed Chronicles with the help of this video walkthrough. 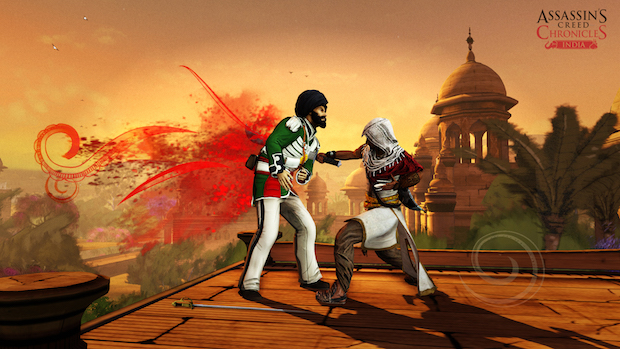 Assassin’s Creed Chronicles: India is set in the Indian city of Amritsar in 1841, with the Indian struggle for independence against the British Empire serving as our backdrop. The actual story in the game is fairly intriguing, exploring some of the political, social, and historical contexts of the era and of the place, while also serving to tie into the Assassin’s Creed lore fairly well.

Assassin’s Creed Chronicles: India is an entirely stealth focused game- unlike the mainline games in the series, being seen, hightailing it, and trying to take your pursuers on is not an effective option.

The game is divided into ten memory sequences, each representing a ‘chapter,’ so to speak:

In this chapter, you are tasked with infiltrating the Amritsar Summer Palace.

This chapter takes place the next morning. The Templar presence in Amritsar is strong, and Hamid is concerned they may be trying to recover the Koh-i-Noor diamond.

Arbaaz needs to slowly weave his way through the bustling town without being seen, and rendezvous with Hamid before the Templars beat him to it and take the diamond back.

Arbaaz must infiltrate the Templar fortress to free Hamid.

Meanwhile, Hamid comes face to face with the Templar Major, William Sleeman, and his right-hand man, Captain Alexander Burnes, who are trying to extract valuable information from Hamid.

Sequence 4: The Secret Below:

Arbaaz finds himself at an ancient Precursor site; the entire place is rigged with traps, which Arbaaz needs to navigate carefully to make it out of there alive.

Arbaaz must make sure he stays on Sleeman’s tail; at the same time, it is vitally important that he not be discovered and captured himself, as he tries to learn what it is that the Templars are after.

The action moves to Afghanistan; Arbaaz decides to help the local Afghans in trying to liberate their locale from the British. He targets specific areas of the British castle, and he must hit them silently and undetected, so the Afghans can storm the castle successfully.

Sequence 7: What Lies Beneath:

Arbaaz must follow Sleeman inside the castle stealthily, and not be discovered

Sequence 8: The Thief Within:

After being captured by the Templars, Arbaaz awakens stripped of all his tools and equipment.

He must escape, undetected, and attempt to recover his things.

Once he has done so, Arbaaz can then steal the artifacts the Templars have acquired from within their own camp.

Discovered, Arbaaz must attempt to escape the Templars, who are now focused upon him with all their might.

Sequence 10: The Rescue and Ending:

The final chapter, which sees the resolution to the plot points in the story, and also sets up a future, grander game set in India in the Assassin’s Creed timeline.

You can check out the full walkthrough for the game below in video form: