At Sundown Interview: The Light Is Your Enemy

At Sundown is a game that presents players with a unique twist on the combat arena genre. What sets this game apart is its inclusion of stealth as an integral part of the gameplay. The game features a mechanic where maps are covered in darkness and player actions like shooting and dashing will give away your position to your enemies.

The game is being developed by Mild Beast Games and to learn more about it, Gamingbolt reached out with a few questions to the Producer of the game, Ted Park. You can read the entire interview below. 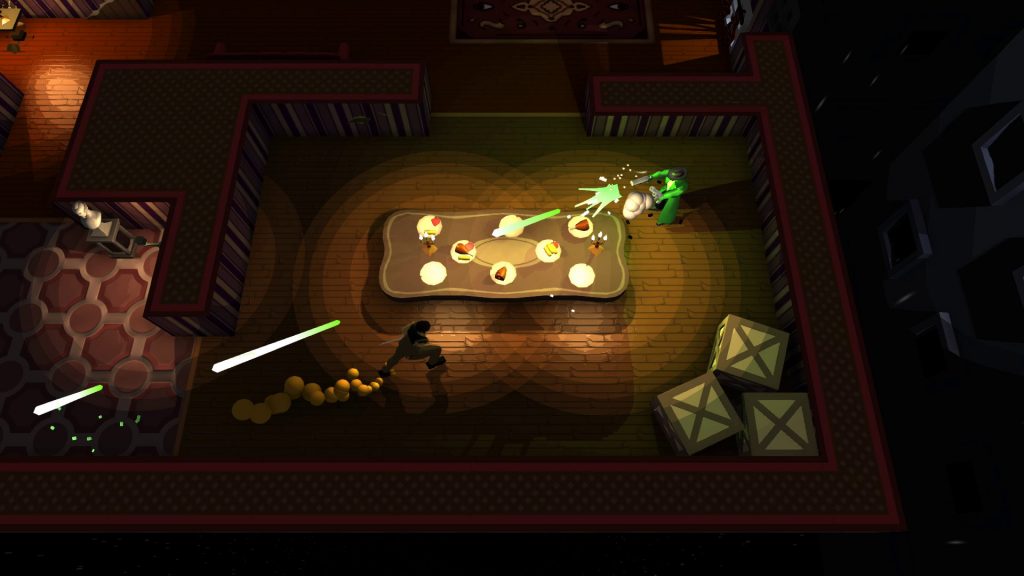 "All the guns feel good to land a kill with, and we gave the characters movement options like running or dodging, that feel familiar to people that play games like Smash Bros."

We’ve seen all kinds of arena combat titles over the past decade but At Sundown does something truly different with the addition of stealth. How did this idea come about?

The idea came about when Steven Li, our lead engineer, heard the name “Shotguns in the Dark”.  The gameplay mechanic just naturally came about from there. Once the prototype was made, the mix of action and stealth was interesting enough that we just kept thinking about cool ways to play with the light, leading to the game you see today.

Being a relatively new studio, what are some of the challenges that Mild Beast Games has faced with At Sundown? Is there any concern about the genre being too niche in this day and age?

Hoo boy… Where to even start? Well, figuring out how to function as a company was definitely a struggle, especially us coming straight out of college, with no real-world experience or business expertise! Bringing your game to a commercially-viable state is no easy task either… we had to revamp the characters to be “cooler” and add a ton of content such as a single player mode, bots, translations, online features – the list goes on and on. Pretty daunting for a small studio! Luckily, our publisher, Versus Evil, helped us a lot along the way, and we’re very grateful for that.

Regarding the genre of “stealth-based arena shooters” … it’s definitely a small niche. But we’ve tried to make At Sundown more “action-y” to bring in people that would never play stealth games otherwise. All the guns feel good to land a kill with, and we gave the characters movement options like running or dodging, that feel familiar to people that play games like Smash Bros.

The concept for the game involves staying in the dark and catching your opponents by surprise. How do you incentivize players to fight each other though rather than playing the waiting game? For that matter, how integral is the first move in matches?

We tried to use map mechanics. For example, the Mansion maps have an ongoing lightning storm, so every so often it lights the whole map up, revealing everyone.

Otherwise, I think fear plays a part of it… Not knowing where your enemy is means there’s always a possibility that he could be right there next to you, so you want to shoot just in case! But of course, if your judgement is wrong or you miss, you’re left vulnerable. Then it’s a question of can your opponent take advantage of that? You might shoot in one place, but then run away to another place using the dark. So, it’s an interesting game of cat-and-mouse. The first move isn’t necessarily the one that determines whether you win or lose.

What can you tell us about the different zones and maps in the game, especially with how they provide different play experiences? Though new zones are unlocked as players level up, will you be adding more in the future?

All of the zones have different light-based mechanics. As I mentioned, the Mansion has a lightning storm that lights the map up. Factory has lasers that trigger spotlights that follow you. My personal favorite is the Disco, which has light panels that light up to the music.

As for more zones… you’ll have to wait to see.

What are some of the special challenges that players can undertake in the game? Will there be more challenges or even special modes later?

We have “Break-the-Targets” challenges for each weapon, which was pretty shamelessly taken from Smash Bros. You have to shoot all of the targets in a map as quickly as possible and try to beat your previous times to get medals. Some of the gold medal times are really tough, and you’ll have to really utilize each of the weapons’ special abilities to make it.

There are no plans to add more challenges but if people want more, we can look into it. 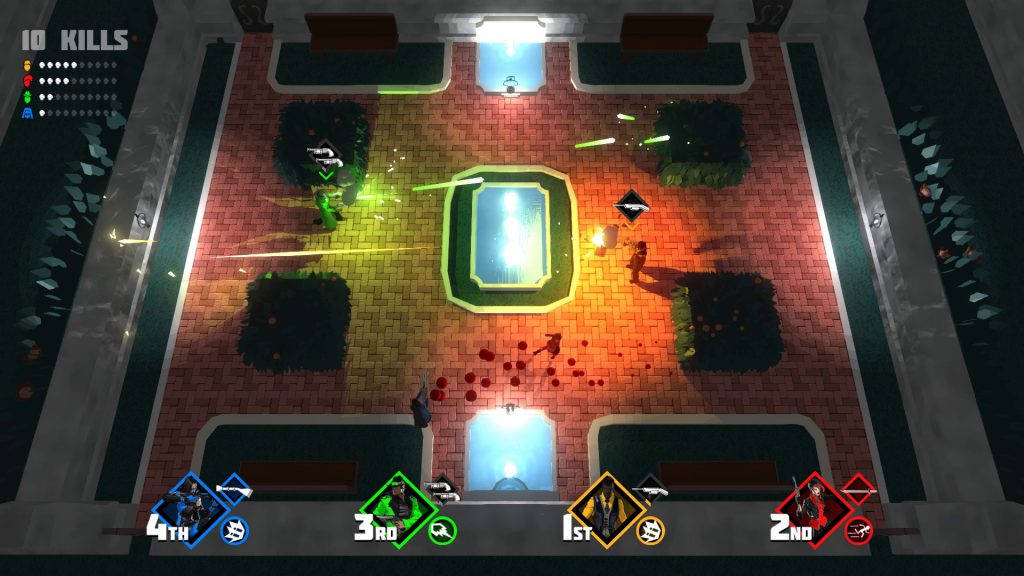 Are there any means to customize characters or other unlockables throughout the experience?

It’s a funny question that we probably won’t be able figure out in time for the full release… mainly because 90% of the time your character is invisible, and the camera is so far away it would be hard to even see any cosmetics your character is wearing. Maybe we’ll figure out something in the future, though.

What is your approach to matchmaking? What are some of the difficulties faced in properly matching players together?

We try to achieve balance between matching people of similar skill and making sure you get a match. That’s the toughest thing about online matchmaking – you want to make sure that a player doesn’t get destroyed, but you also want to make sure he gets matched with someone instead of waiting for hours.

If we were a bigger company like Blizzard or Valve, we could invest a lot of time and money into figuring out the perfect algorithm that does all that. But we tried our best to do so given resources we have.

How has the response been to the game’s demo? What feedback did you keep in mind for the final release?

It’s been great! We had lots of people telling us they got their friends to download it and have a good time. We even had an Overwatch League player, numlocked, play it with his teammates. There are some hardcore Overwatch players on our team that were fanboying over that.

As far as feedback, we mostly had bug reports that we fixed for the full release. I think it’s a little too early to be getting feedback about things like weapon balancing, especially when people haven’t gotten the chance to play with all the weapons. 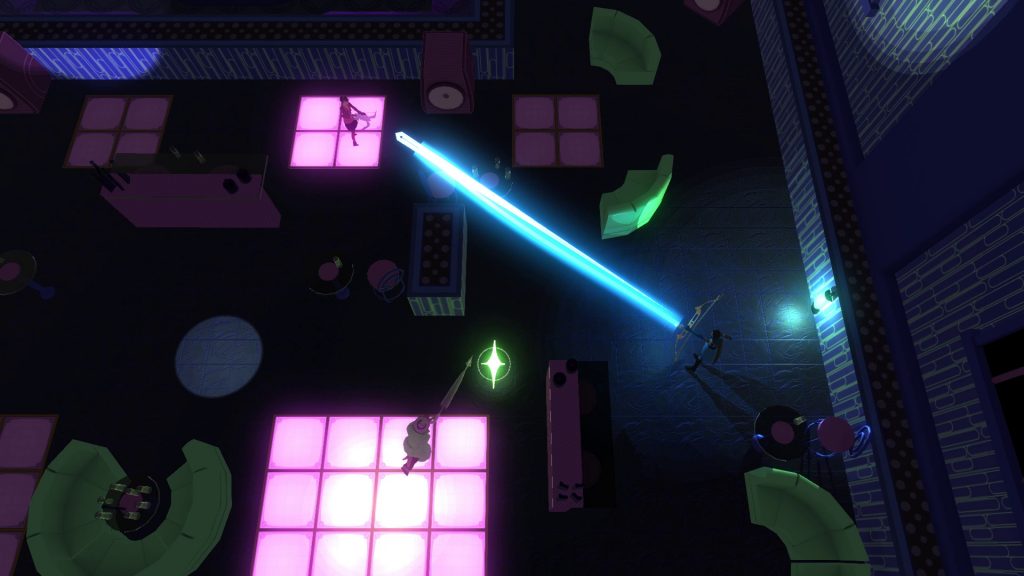 "There are no differences between the base versions and the PS4 Pro/Xbox One X versions, but you might see a performance boost here and there."

Can you please talk about the Switch version? How different it will be from the other platforms?

Ha, everyone wants to talk about the Switch version! We did utilize HD Rumble so that the player could “feel” what side of a wall he’s walking into. We also let you use a single Joycon as a controller, which is nice when you’re carrying your Switch around. Other than that, there aren’t any differences.

What is the current post-launch plan for At Sundown?

Don’t want to spoil too much… We will say we have two updates in development right now that we’re very proud of.

To all our fans: thanks for your support! It’s been a long journey, but it’s almost coming to a close. To all our non-fans: this is a fun party game to play with your friends, we hope you give the Steam demo a shot and have a good time.