Posted By Will Borger | On 25th, Jul. 2017 Under Article, Reviews | Follow This Author @will_borger

Humans have always dreamed about traveling to the stars. For as long as our race has existed, we’ve looked up at the sky and wondered about our place in the universe. What’s out there? Can we go there? How would we survive? Are we alone? And for centuries, we’ve tried to answer those questions, pushing our minds and technology ever harder in the name of discovery.

Aven Colony developer Mothership Entertainment attempts to tap into that spirit, placing you in the role of the Governor of humanity’s first colony outside of Earth’s solar system. The colony in question is located on a small moon orbiting Aven Prime, a gas giant ten light years from Earth. You job? Establish a series of working colonies that will provide a home for all the souls on your colony ship, and explore the moon.

Aven is an easy game to play. After a quick optional tutorial that will walk you through the game’s controls (which work surprisingly well on a gamepad) and features, the game allows you to play either a campaign or in a sandbox mode. Both feature the same maps. The former is more structured, with specific mission objectives for you to complete and a rather predictable, if serviceable story to guide you along. Sandbox mode allows you more freedom to tweak the game’s settings (difficulty, resources on the map, etc), but provides a similar experience. 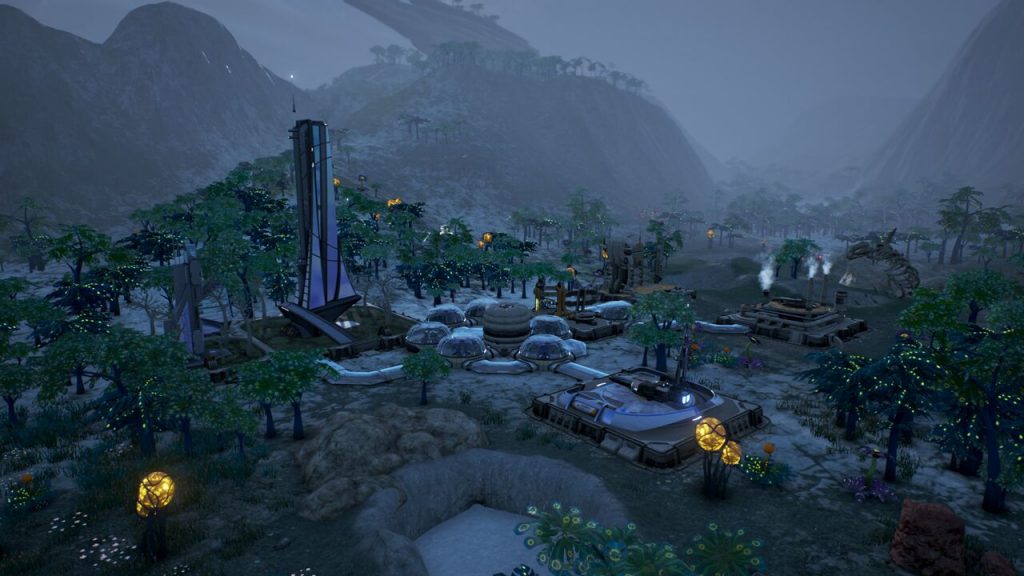 "Aven functions primarily as a city builder. You’ll start each mission with the basics. From there, you’re largely on your own."

Whatever mode you pick, the game plays very much the same way. Aven functions primarily as a city builder. You’ll start each mission with the basics – a few pre-fabricated structures from your colony ship that provide living quarters, storage capacity, power, and drones to construct more buildings – and basic resources like food, water  and nanites, which are the resource needed to build and upgrade structures. From there, you’re largely on your own, able to chart the course for your burgeoning colony as you see fit.

There’s a lot to manage, but the core objective is to keep your colonists happy. How you do it, is up to you. How will you provide power? Solar panels, wind turbines, or geothermal generators? Generators are by far the best option, but they can only be built over geothermal vents, limiting their viability. Solar panels are extremely cost effective and efficient, and can be built anywhere, but only provide fifty percent of their regular power in winter. Turbines are the least effective, but dirt cheap, can be built anywhere, and don’t suffer any loss of ability in winter.

Providing food and water faces similar challenges. Farms and water pumps provide the best bang for your buck, but the former requires fertile land and can’t grow anything in winter, and the latter can only be placed in certain areas. Greenhouses, on the other hand, can operate year round, and atmospheric condensers can be placed anywhere, though they don’t produce nearly as much water. Alternatively, if food and water are scarce near your colony, you could establish a trade hub and trade other, more plentiful materials (such as minerals, like iron or copper) for basic necessities. 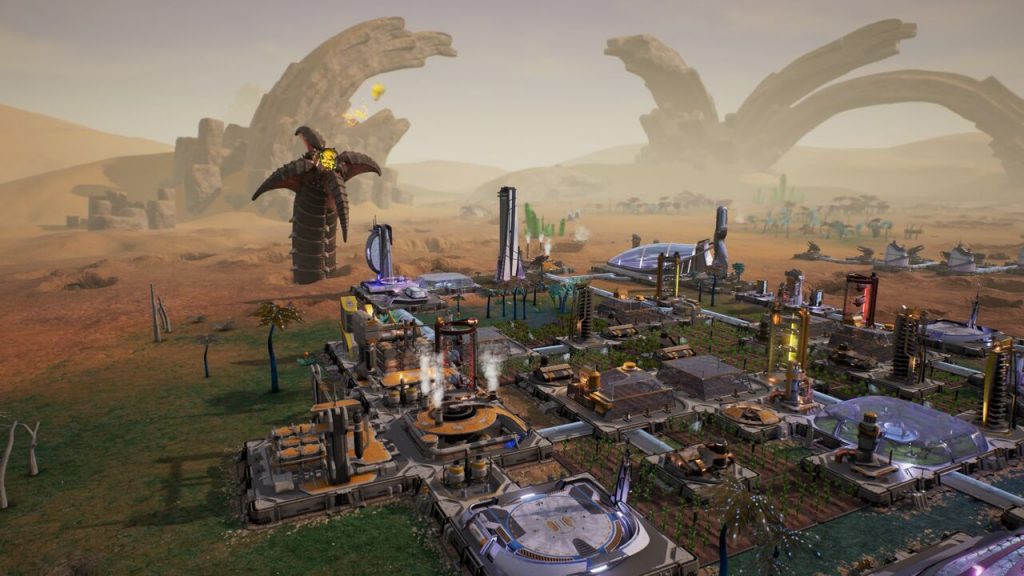 "Playing Aven is lot like operating a spreadsheet: you’re constantly checking in on dozens of numbers and statistics in various menus."

Many of these buildings require people to work them, which means you’ll have to provide adequate housing and establish an immigration center to bring them into the colony. You’ll also need to make sure your food and water production, and your power supply, increases to compensate. Oh, and you’ll need to make sure your air quality stays high, so people don’t get sick. If they do get sick, you’ll need hospitals to ensure adequate health care. On top of that, the more people you have in a colony, the more jobs you’ll need to supply to make sure unemployment stays low, and the more crime you’re likely to get. And then, of course, people will want entertainment.

You’ll need to connect all of the buildings you create with tunnels to provide power and help people get around, and as you expand, you’ll need to ensure that you have enough nanites (which are processed from materials you mine) and drones to keep things running.

Playing Aven is lot like operating a spreadsheet: you’re constantly checking in on dozens of numbers and statistics in various menus. Mostly, you’ll be responding to the world around you. Are you running short on workers? Establish an immigration center and bring in more colonists. Has crime gone up? Build some police drones. Are people complaining about their commutes? Expand your network of tunnels. 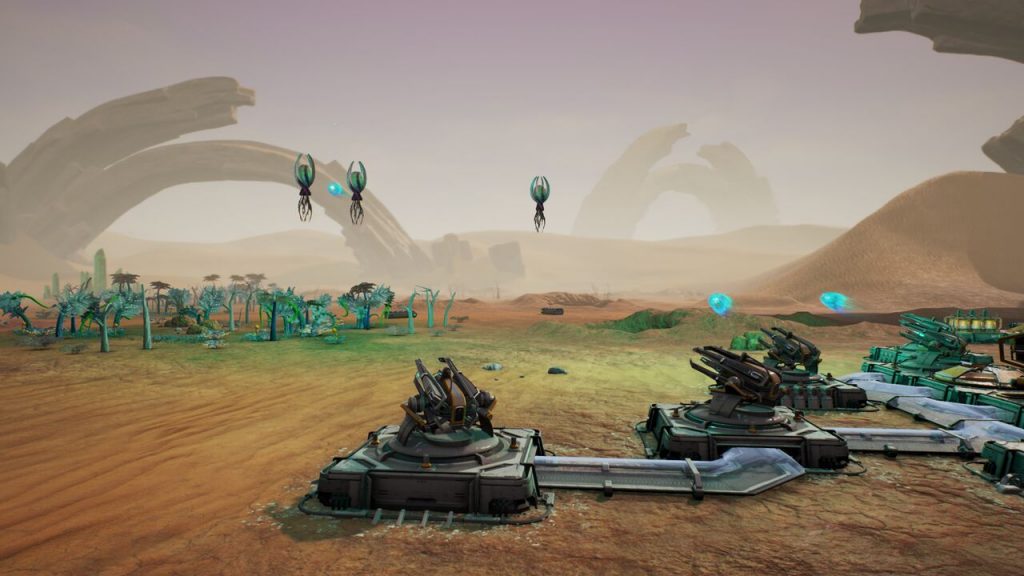 "That lack of threat is probably Aven’s key issue. Nearly all of the game involves little more than operating menus, so there’s little sense of danger or failure in the core gameplay loop, which is compounded by the fact that not much threatens you."

Running a colony effectively is pretty easy, which is good, because once your colony hits a certain size, they get to start having elections. On the ballot? You, as Governor. This system is intended to keep you on your toes and make sure your colony is operating efficiently, but it comes into play only after your colony is pretty well-established, so there’s very little threat to it. I never came close to losing an election during my playthrough.

That lack of threat is probably Aven’s key issue. Nearly all of the game involves little more than operating menus, so there’s little sense of danger or failure in the core gameplay loop, which is compounded by the fact that not much threatens you. Oh sure, the colonists will whine about their commute times and crimes levels around election time, even when both are well-managed (or in some cases I observed, non-existent. Bloody suburbanites.), but the elections rarely threaten you, which means almost all of the threats to your colony come from things that are largely beyond your control. Unfortunately, these miss the mark, too.

To be fair, Mothership tries. There’s Creep, parasitic alien spores that can invade your colony and infect your colonists. Lightning can strike and damage your buildings, and shardstorms pound them in the winter. Poisonous gas might creep out from a geothermal vent and get sucked into one of the intake fans you use to help maintain the colony’s air quality, and there’s even plagues that can get into the tunnels. The issue, again, is that all of these are exceptionally easy to deal with. Creep spores heading toward your base? Build some plasma turrets. Lightning rolling in? Build a couple lightning towers. Shardstorms? Plasmas turrets. Poisonous gas? Air filters and hospitals. Plagues? Same thing. 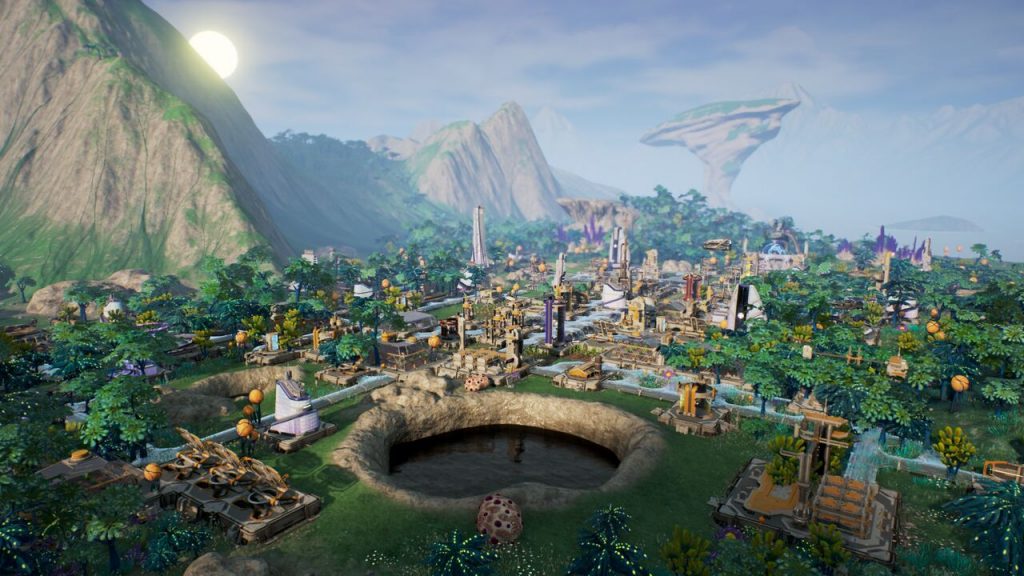 "Aven is too much like many of the other city builders out there, and doesn’t take enough advantage of its sci-fi premise."

All of this can add up to a gameplay experience that feels largely conflict free and rather samey, no matter what map you play. Again, Mothership tries, especially in the campaign. There are mission objectives to complete and guide your colony and many task you with building things you normally wouldn’t, and the story does its best to keep you engaged as you discover the presence of alien life on the planet. There are some neat touches: you can outfit and upgrade expeditionary ships and send them on missions, and find and research certain alien artifacts that provide powers you can use to assist your colony.

But it’s not enough. The storyline is predictable, the characters unremarkable, and the dialogue rather stilted. In one of the most cringe-worthy exchanges, two of the characters debate whether they should notify the colony ship about a problem via their version of Twitter or by Skype, complete with slightly altered, cutesy, wink-wink-nudge-nudge-say-no-more name changes to avoid any permission issues. And even the artifact and expeditionary quests, as fun and unique as they are, don’t do anything to break the monotony of navigating through menus and determining which way your tunnels should go.

This isn’t to say that Aven Colony is a bad game. It can be fun to build and grow a colony, and the maps themselves provide a good amount of variety, even if the gameplay systems do not. It feels, however, that the game is a bit undercooked. Aven is too much like many of the other city builders out there, and doesn’t take enough advantage of its sci-fi premise. The beauty of science fiction is that it is unconstrained by the mundane. It can show us something new, take us to new worlds, and explore new ideas. It has inspired us to invent the internet and travel the stars. Aven Colony, however, would much rather you keep your feet on the ground.

Maps provide variety. Both a campaign and sandbox mode. Many different ways to build a colony. Fun twists like artifacts and expeditions.

Not much threat to your colony. Ease of play makes things feel a bit samey. Story is predictable and dialogue is poor. Doesn't do enough to take advantage of its sci-fi premise.

Despite its variety and the occasional innovation, Aven's lack of threat and mediocre story make the game feel undercooked. It's a sold city builder that doesn't do enough with its premise to stand out.

A copy of this game was provided by developer/publisher for review purposes. Click here to know more about our Reviews Policy.
Tagged With: Mothership Entertainment, pc, ps4, Team17, Xbox One