This Week in Awesome Games That Time Forgot we look back on a wrongly overlooked PS1 RPG, that was most certainly the most underrated title in the series

Back in the halcyon days of the SNES, Capcom released a little RPG title called Breath of Fire. For what it lacked in innovation, it possessed an almost flawless execution of a simple yet gripping story with some hardcore turn based battles. The game was good enough in fact that square actually took the time to localize it for the western market in favour of releasing the fifth Final Fantasy title on these shores. Fast forward to the year 2000 (or 2001 if you live in Europe) and we see the release of the fourth, and in my opinion strongest, title in the Breath of Fire franchise. Yet sadly the game doesn’t feature in any of the top games of all time lists and generally seems to have been unfairly forgotten as time has moved on. So I want to take a few minutes of your time to remind you of just why this title is well worth remembering.

The game opens with Nina, princess of the Wyndia kingdom, and her friend Cray, leader of the Woren tribe looking for Nina’s sister. During their travels they encounter a strange man, our amnesiac protagonist Ryu, and decide to help him recover his memories, whilst searching for Nina’s missing sister. Did I mention that our hero is able to transform into a dragon? The plot thickens as a simultaneous sub-plot follows the games antagonist, Fou-lu, the resurrected first emperor of an ancient empire who also shares Ryu’s draconian powers.

Why it was awesome

You have two guys who can transform into freaking dragons! That’s insane! I was just a kid when I first picked this game up and I don’t think I’ve ever recovered by how much this blew my mind. Sure it was a staple part of the series from the beginning, but having played all the games in the series, I can safely say that four was the magic number when it came to insane dragon-based action. 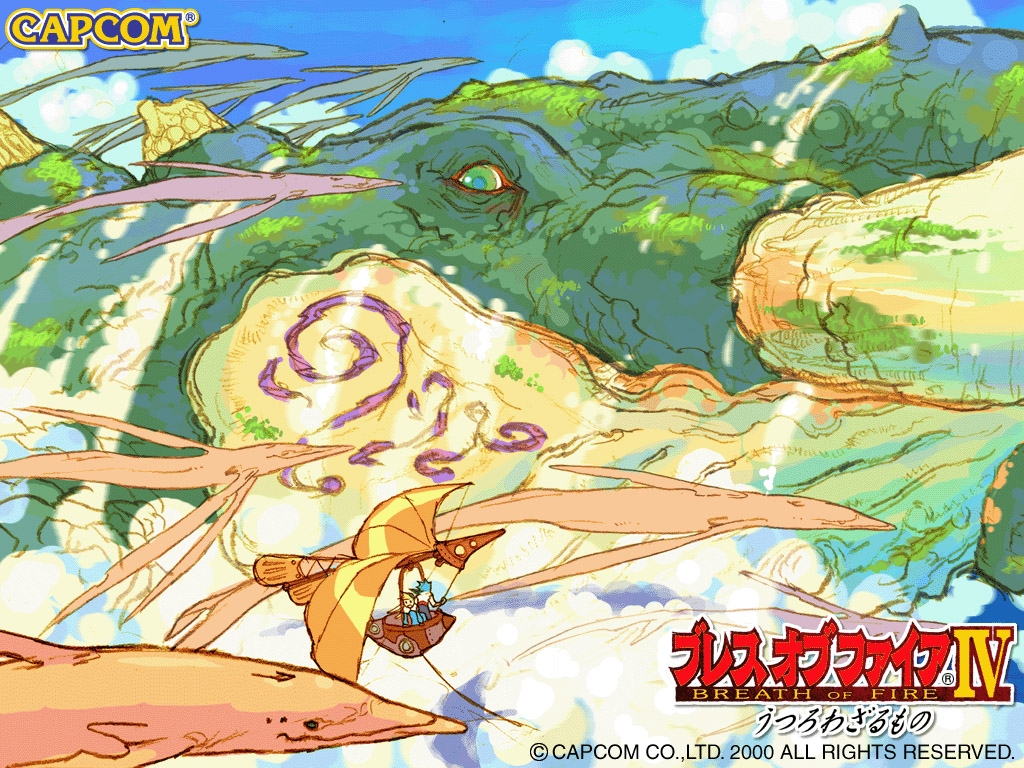 The story also had a hell of a lot going for it. You had the continuing search for the missing sister, the origin of Ryu’s powers, his link to the mysterious and sinister Fou-lu and not to mention the reasoning behind the bizarre little robot guy who follows you around. The tale also had a great atmosphere evoked throughout, not afraid to tug at the heart-strings, but also pretty humorous and jovial in some places. It was nice to see that all of theses threads of story came together at the end perfectly, culminating in a fantastic and memorable climax. You also had the choice of two endings. Not much by today’s standards, yet at the time I felt spoilt for choice.

If you did decide to go for true ending you had one hell of a final boss to take down. Now I normally hate the huge combat spams at the end of JRPGs, but Breath of Fire made it pretty exciting. That final battle took me two hours. You heard right two whole hours. That’s not including the cinematics before and after either. But it was so enjoyable. The battle mechanics were as tight as can be and I had 120 intensely enjoyable minutes of action points and party management, complicated magic element combos as well as the costly but effective ultimate dragon attacks.

There were other aspects to the combat that also kept it fresh throughout the 20+ hour long adventure. If you used the guard command you could learn enemy skills and could then reassign these to any party member of your choice at camp. The amount of versatility in this system was astounding and my 12 year old mind boggled at the sheer possibilities of the skills I could learn. It was also pretty fun tracking down the masters throughout the game. Upon finding them you could embark on a side-quest and get them to train one of your characters. This would give them combat bonuses like new skills and stat boosts. It certainly kept me investigating all the NPCs in the game 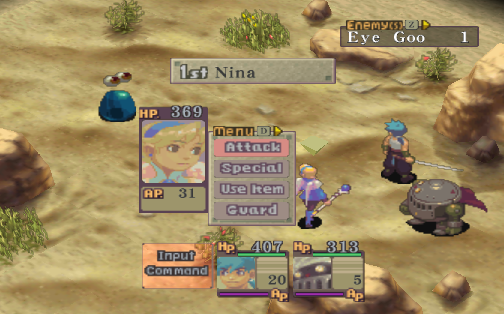 Oh turn based combat, I miss the days when you were really good

While we’re on the topic of side-quests BOF4 was full of fun little diversions. You had the masters mentioned above to track down, as well as various dragons who would further unlock Ryu’s powers. His ultimate dragon form “the Kaiser” was also a pretty meaty side-quest in its own right, as without finding all the dragons and getting all Ryu’s skills you couldn’t keep control of Ryu whilst he was in this form. You also had the fairy village to consider. You had to task the various fairies with different jobs to ensure the economic and military success of your fairy village. If you did your job well enough you could visit the shops in your village that would often stock items and equipment that wasn’t available elsewhere. That and the fairy characters were hilarious to boot. If you still wanted to waste time and avoid the main plot arc you always had the patient and unnecessary fun of the fishing. These last two mini-games had enough depth to them that they even got their own spin-off mobile phone games in Japan.

The presentation was also spot on with graphics and sound that were pretty good by the standards of the day. The anthropomorphic inhabitants of the world returned from previous games (and believe me you never get tired of seeing cat and fish people) and the whole palette had a vibrant and cartoony feel to it. This was the only title in the series apart from the PS2 entry that was able to break away from the super-deformed character models of the previous games, and it was graphically stronger for it. Sure there were a few camera issues, but this is an RPG. You have time to fiddle with your camera settings and take in the sights. The audio was also pretty gripping. SFX were satisfying enough to keep the ball rolling, but the music was out of this world, breaking from the disjointed and plain odd jazz effort of the previous game. It’s one of the few times I’ve imported a soundtrack CD from Japan and it was totally worth the wait. Ironically I spent more on the CD than I actually did on the game when it came out, but it was worth every penny. 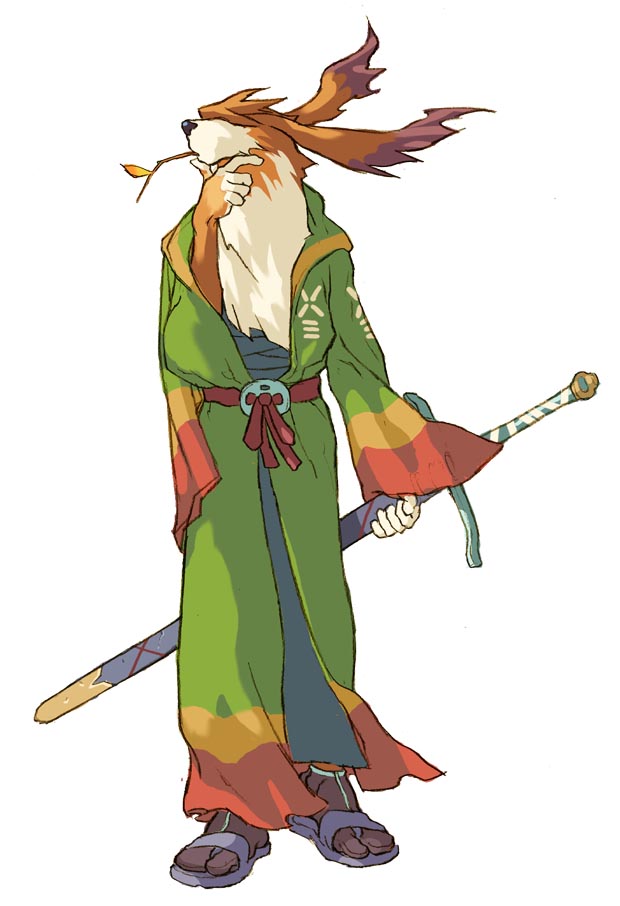 The visuals were bright and fun, and you never do get tired of seeing big dogs with swords

While we’re discussing the price of things, Breath of Fire caught my eye when it was first released due to its budget retail price. I can’t attest to US retail trends, but here in the UK PS1 games were roughly £45 a pop, yet BOF4 was only £20. So not only do you pay half the price of a normal game, but you probably got at least twice the enjoyment. Talk about value for money.

Why it was forgotten

For starters the game suffered a rushed and poor localisation due to Capcom having taken a financial hit at the start of that year. For similar reasons very little advertising was done, meaning this game flew under the radar for all but fans of the series who saw it coming. The financial problem also meant that, much like its predecessor, very few copies were printed in the west. This also accounts for why the game is considered quite the rarity these days.

Another point that probably didn’t help was the inevitable competition from Final Fantasy 9, released the same year in the US. It’s a shame really as I personally preferred BOF4 to FF9, though it’s easy to see why Breath of Fire was overlooked when it was released at the same time as an RPG heavyweight like the Final Fantasy series.

The game’s sequel Breath of Fire Dragon Quarter received a lukewarm reception, both critically and commercially. It’s a shame as, whilst it is certainly the weakest entry to the series, Dragon Quarter attempted to address previous criticisms that the BOF franchise was failing to innovate. It’s most likely due to this that there has yet to be any word on a Breath of Fire 6 and why interest in the franchise has waned as of late.

For all the talk of no new sequels some attempt has been made recently to renew interest in the series. Hand held ports of the first three games have been made, with the first and second games gracing the game boy advance and BOF3 joining the ranks of PSP games. Yet for some bizarre reason it stopped there and the most accomplished title of the series failed to get a portable remake. A true shame If I’ve ever witnessed one.

Breath of Fire 4 was one of the greatest RPGs of that generation, and personally is one of my all time favourites, yet is always forgotten in favour of the more commercially successful titles such as those in the Final Fantasy series. If this article has peeked your interest and you wish to obtain a copy of the game then you can find it on Ebay, priced at roughly £15/$45 at the time of writing. Whilst this may seem pricey for such an old title, it has sadly become hard to track down as of late. Needless to say you’ll find enough enjoyment here to justify the purchase.