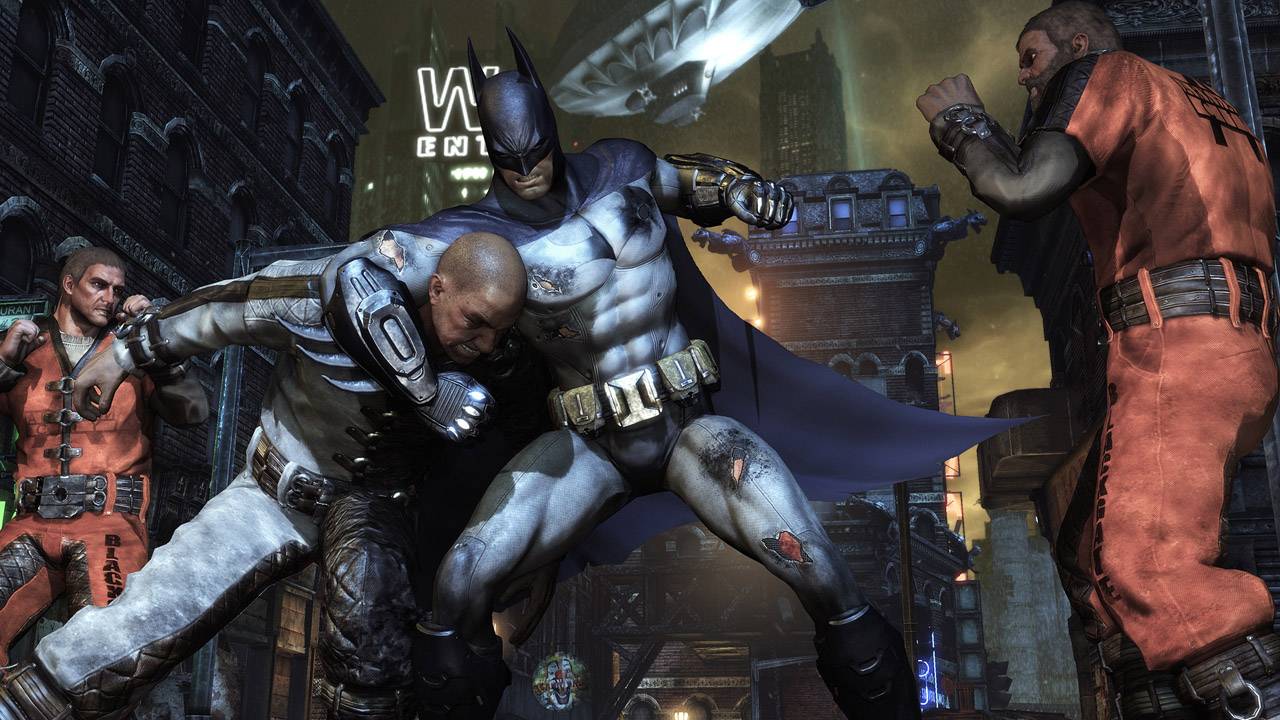 Batman: Arkham City, the sequel to 2009’s amazing Batman: Arkham Asylum, is almost here, with 4 days to go for the US release date and 8 days for the UK release date. The reviews have started trickling in, and boy are they impressive. But rather than you having to scourge the entire internet to read the reviews thus far, we’ve compiled a list of all of them. Here you go:

Guardian- 10/10
“Stands head and shoulders over its previous efforts. Despite facing stiffer competition than its predecessor, Batman: Arkham City is easily the best Batman video game of all time.”

Strategy Informer- 10/10
“Arkham City is stuffed to the edge of the disc with content and replay value (in addition to the gigantic campaign there’s an expanded Challenge Mode and New Game Plus), is incredible amounts of fun, is polished to perfection, has had real love poured into every aspect, and most importantly, it makes you feel like Batman.”

Digital Foundry- 10/10
“The richness of the world is helped by the fact that Arkham City is a stunning looking game. This is one of the most detailed, rich and vibrant open worlds ever created, whether you are gliding over its skyline or striding down the broken-down streets. Considering the size of the world, the rich detail of the interiors is incredible, putting many more linear games to shame.”

GamePro- 10/10
“There’s a real sense of progression to Arkham City in its gameplay, in its story, in the variety of its missions (the abundance of open world side-quests will keep you busy for a long, long time), and in the evolution of its pointy-eared protagonist, that really deserves to be commended.”

Gameblog.fr- 10/10
“Rocksteady delivers a new masterpiece, enhancing the original in almost every way. Batman Arkham City offers a better story, masterfully paced storytelling, more freedom, more surprises, secondary missions and tasks, an intensified combat with new moves… To sum it up, a follow-up that met our expectations, without forgetting the strengths of the original, and growing up to be a spot-on tale of adventure and excitement: a serious candidate for the GOTY title.”

Games Radar- 10/10
“Batman: Arkham Asylum was the greatest superhero game of all time. The sequel, Batman: Arkham City, is five times bigger and about a billion times better. You do the math.”

Telegraph- 10/10
“A wonderful, startlingly complete package tailored for the single player. In these days of multiplayer crowbarred into any old game, it’s a relief, a bold statement of intent that Rocksteady have created such a supremely focused but hugely expansive video game. It’s a brave, committed, confident piece of work.”

Eurogamer Sweden- 10/10
“Rocksteady Studios surprised us all back in 2009 by delivering one of the best games that year with Batman: Arkham Asylum. This year they show us that they are a force to be reckoned with when Batman: Arkham City more than lives up to expectations; it surpasses them in what is a very strong contender for Game of the Year 2011. No multiplayer? Who gives a bats a**?”

Giant Bomb- 10/10
“It might not rewrite the book on Batman video games, but when you’re building off of such a strong position–and you’re only shipping the second game with such similarities, rather than a third or fourth–it’s hard to bicker too much about what changes the developers did or didn’t make.”

1UP- 10/10
“Controlling Batman as he completely terrorizes his victims, whether via the invisible predator gameplay or the brutal combat, is an experience rivaled by few others. From its memorable Bourne Identity-esque opening to its shocking ending, Batman: Arkham City secures its place as my favorite superhero game since Freedom Force.”

VideoGamer- 10/10
“It doesn’t take the world’s greatest detective to spot that this is an expertly crafted adventure, one that maintains a breathtaking pace and invigorating rhythm from beginning to end. Dizzyingly extensive and lovingly detailed, Rocksteady has created an intricate, spirited and unequalled playground worthy of one of the most iconic characters in modern fiction.”

Game Informer- 10/10
“This game could be one of the biggest and most enjoyable time sinks of the year. Arkham City not only lives up to the standards set by Arkham Asylum, it bests its predecessor in every way and stands tall as one of Batman’s greatest moments.”

Official PlayStation Magazine Australia- 10/10
“Just so there’s no confusion, let’s state it plain: Batman: Arkham City is not only the best superhero game ever made, it’s one of the best games ever made full-stop. Batman: Arkham City takes the already superlative original and gloriously expands on it. It’s a deeper game, more complex, more inventive, more mature. In our view it brings the caped crusader’s world to life better than any comic, movie, or television show before it … To say it one last time: this is what it means to be Batman. And when it comes down to it, who the hell doesn’t want to be Batman? [Nov 2011, p.62]”

Machinima- 9.5/10
“Combat is extremely fulfilling due to the fact that you can string together attacks, counters, gadget quick attacks, and special moves completely flawlessly.”

Everyeye.it- 9.5/10
“Arkham City is a masterpiece. The improved free-flow combat system and various new gadgets contribute to brilliant gameplay, while a complex screenplay delivers a breathtaking experience. But it’s the number and the characterization of villains and personalities that stand as an incredible surplus value.”

CVG- 9.5/10
“It’s a belief in the character and, most importantly, a belief in itself that has seen the studio deliver one of the greatest Batman interpretations of all time. And you know what? Maybe even one of the best games ever.”

SpazioGames- 9.4/10
“Rocksteady managed to clear up the few things that didn’t work in Asylum and widen its scope. The result is another real Batman experience, offering an in-depth look on the charachter that even Nolan’s movies (at least until now) cannot offer, and an unforgettable gaming experience.”

GameTrailers- 9.3/10
“Arkham City feels like a logical extension of its predecessor, wholly embracing and expanding upon all the elements that made it great. It most certainly is the definitive Batman game, but to leave it there would be to damn it with faint praise. Simply put, if you admire painstakingly-realized worlds rich with secrets and game mechanics that never cease to surprise you, then you it to yourself to experience Arkham City. Your interest in the source material is irrelevant.”

GamingXP- 9.1/10
“Great sequel to a already great game. Lots of variety, all of the tools Batman has to offer, great graphics, and a stunning atmosphere transform this into a must-have title for Batman fans.”

Gamereactor Sweden- 9/10
“Batman is back, better than ever with new tools, new areas to explore and an exiting adventure. Arkham City is better that it’s predecessor in every possible way and in the end, it’s one of the best games of this generation.”

GameSpot- 9/10
“From the speedy exhilaration of soaring high above the streets to the atmospheric thrill of discovering long-forgotten secrets in the tunnels below Gotham, this is an unforgettable adventure that will keep you coming back to the cape and cowl long after you’ve seen the credits roll.”

IncGamers- 9/10
“No matter what though, what can’t be denied is the quality and entertainment-factor of the overall product. Whether you like Batman or not, you’ll find much to like here. In the matter of only two games, Rocksteady has managed to create a Batman franchise that provides us with not only the best videogame incarnation of the Caped Crusader, but the best videogame incarnation of any superhero.”

Wired- 9/10
“Weighed down by bloat though it may be, Batman: Arkham City is still one of the year’s finest games, filled with the capacity to surprise even players who’ve skulked through every inch of its predecessor.”

Edge- 9/10
“So if Arkham Asylum was defined by its limits, Arkham City is a careful, considered exercise in stripping those limits away. Its open city lets players be a different kind of Batman to the stealthy predator of Asylum – this is the Batman of dropped smoke pellets and theatrical getaways, the Batman with an ear to the ground for the strong picking on the weak, and the Batman who floats above the city with a gothic majesty. It’s less focused, but more diverse, a miniseries rather than Asylum’s moody one-shot. And at its heart, Rocksteady’s defining take on its star remains just as you always imagined him – kicking, punching, sneaking and now flying. Arkham City might be filled with landmarks to visit and villains to smite, but being the Batman is still its primary draw, and Rocksteady doesn’t let you forget it. [Nov. 2011]”

Joystiq- 9/10
“Rocksteady has made the greatest Batman game ever crafted, and they’ve done that before. But breathing life into a staggeringly beautiful world; one which hums not only with opportunity, but ambition? That’s a new trick altogether.”

Official Xbox Magazine UK- 9/10
“The game doesn’t benefit from the novelty of Rocksteady’s first, pitch-perfect effort, but based on the quality and beauty of Gotham’s pair of correctional institutes, we’re perfectly happy to be incarcerated again.”

Metro GameCentral- 9/10
“Not just the best superhero game, but one of the greatest action adventures ever made – set in an expansive and engrossing virtual world unlike any other.”

Eurogamer- 9/10
“It’s a role-playing game in the most literal sense of the phrase, a game in which you’re encouraged to give in to the fantasy, and to see what life is like when it’s composed of rooftop brawls and zip-line getaways. Animations, traversal mechanics, takedowns: they’re all building towards the same thing. In Arkham City, you become Batman.”

Destructoid- 8.5/10
“It doesn’t quite reach the highs of its predecessor, but Arkham City rarely sinks low. When it’s all said and done, you’ll be begging for more, but not because there wasn’t enough. It is just too damn fun to be The Bat.”

We’ll keep updating this page as more reviews hit the net. Keep checking back, and if we’ve missed any reviews, let us know in your comments.