Battlefield is one of the best multiplayer first person shooters you can buy. DICE has built a series of amazing games and a huge player base. With their most recent addition to the series, Battlefield 1943, they return to the tired World War II setting with great success. With some of the best designed and nicest looking maps they have ever produced EA and DICE have made one of the best downloadable games on the Xbox Live Marketplace and Playstation Network.

Battlefield 1943 may return to the much overused World War II setting but it manages to breathe new life into the setting. All of the maps featured in the game are based in the Pacific Campaign. You will play as either the United States Marine Corps or the Imperial Japanese Navy in an epic struggle of conquest. As in other Battlefield games you will attempt to capture five points across the map. The goal is to control more flags than your enemy and drain their respawn bar. Once you control three or more flags you will begin to drain the other team’s bar more rapidly. Once one team’s bar is empty that team loses the round. The teams then switch sides and play again. 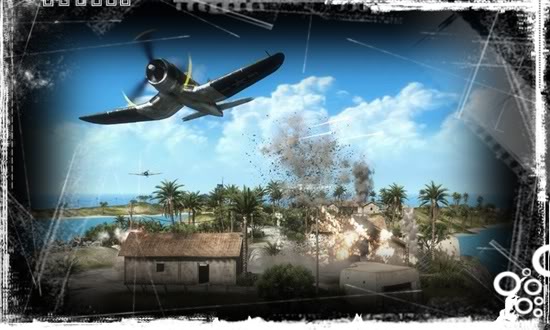 When the round starts or when you die you can select from one of three classes. The Infantry class starts with a sub machine gun, a rocket launcher, and a wrench. They are meant to be the anti-armor and engineer unit. Riflemen are anti infantry and spawn with a long range rifle and a grenade rifle. Finally you can be the scout, the sniper of the bunch. They have light camouflage, a pistol, and remote charges that they can plant and detonate at a time of their choosing.

With each unit having a rock paper scissors style advantage/disadvantage your choice in class affects the way you will play. Snipers will easily take out Infantry from afar, but trying to defend against a close range assault from one is another story. If there were better in game communication then it would be much easier to coordinate assaults of defensive stands, but since no one can ever be heard you’ll just have to wing it.

There is a small assortment of vehicles and stationary weapons for the taking as well. On the land you can quickly move from base to base with a jeep or lead an assault with a tank. You can even provide air support from a fighter. On the defensive side there are mounted guns and anti air batteries placed around key locations. If you’re lucky enough you may even be able to get the bombing run and lay waste to an entire base worth of baddies. Also, on maps where you start on a carrier you can use landing craft to transport your guys Normandy style to the shore, but hopefully minus the casualties. Remember, your respawns won’t last forever. 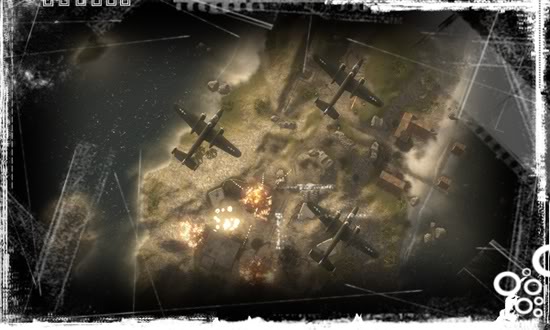 1943 uses the same Frostbite engine that was used for Battlefield Bad Company but it looks as though some improvements have been made. The game looks a bit nicer than Bad Company and has some better coloring and texturing, it also doesn’t have the slight gritty film that Bad Company did. The environments look outstanding, everything from trees to buildings to the ocean are something to behold. 1943 the best looking downloadable game out there. Being that it is the Frostbite engine most objects are destructible. Places that were safe in the beginning of the game are nothing but charred remains by the end. Craters will cover the ground along with other sorts of wreckage.

One of the most subtly defining feature of the game is its sound. From the beginning of the game you will hear engines roar and allies yelling out objectives and enemy locations. The sound of small skirmishes can be heard all around and the sound of gunshots will fill the air. Other soldiers will call out tanks or bombers as they approach your position or even applaud a headshot or the destruction of enemy vehicles. When bombing runs are incoming a loud siren will go off to alert all players as though it were a real bombing. The sound more than anything is what sells this game.

The gameplay, visuals, and sound all combine to immerse you in the battles. They build up a lot of intensity and make you feel like you are really fighting WWII, or at least what it might feel like. Matches will become very intense, especially when they are close. Toward the end you will hear an emergency siren coming from the losing team’s ship letting everyone know that they are on their last few lives. At this point each kill is a huge push toward victory and a major blow to the opposition. Finally, when the last kill has been made, the war report comes on to decree the final outcome. Sounds awesome right? The best part is that you get to play it again from the other side now. When you get a good room with similarly skilled players there is nothing better than knowing that the next round will be another nail biter.

As good as Battlefield 1943 is, it has a few faults that can really ruin the experience. First and foremost are the balancing issues. It should not be possible in any game to play an online match without an opposing team, and yet it is in 1943. Even when there is another team the game will allow one team to be larger than the other and still allow players to join the larger team. It’s no fun to lose, it’s especially no fun when you and two other guys are staring down an entire army because they game isn’t capable of realizing that the team may be just a little bit imbalanced. There are also some graphical issues where small parts of the screen will, essentially, rip out of place and drag over the rest of the screen. While infrequent, it is quite annoying. Finally, the most forgivable problem is that there are only four maps and only three are ground maps. The Coral Sea map unlocked at 43 million community kills is an air only map and can only be accessed through the air superiority mode. The other three maps are very good, but the lack of variety will eventually turn players away. Hopefully DICE can remedy this with another unlockable map or some sort of DLC (Downloadable Content).

It’s difficult not to recommend Battlefield 1943 to anyone. Whether you are a shooter fan or not there is tons of fun to be had, and at 1200 Microsoft points or $14.99 on the PSN the price it right. Grab you gun and hit the frontlines soldiers, this is war, and war has never been so fun.

The game is built extremely well and plays as well if not better than previous DICE multiplayer games. The graphics are stunning, especially for a downloadable game. Matches are a blast. Sound effects are some of the best of any game.

Only four maps, one of which is an air only map. Poor in game communication. Team balancing issues and graphical glitches.

Final Verdict:
SUPERB
Battlefield 1943 is one for the history books.
A copy of this game was provided by Developer/Publisher/Distributor/PR Agency for review purposes. Click here to know more about our Reviews Policy.