Bejeweled Blitz has been given a new hard copy release on account of the recent publishing deal that PopCap have struck with UK publisher, Mastertronic. Whilst the game itself does the stellar job of making the standard Bejeweled formula even more addictive, the question needs to be asked: Why? With the game available for free on Facebook, is there any need to buy an offline copy for your pc? 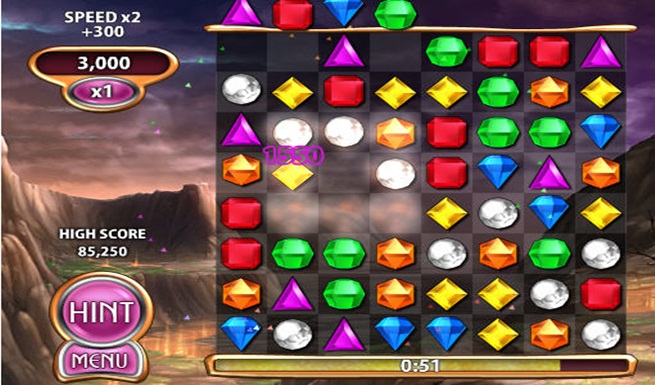 Bejeweled Blitz once more subscribes to the the standard match three formula of the series, but with a twist. Rather than continue the game until no more moves are left on the board, BB instead tasks you with getting as high a score as possible within in one minute. The core mechanics are further bolstered by special gems that are created when you match gems in a certain pattern. Whether it be four or five of a kind, or an L shape, you’ll find the quick thinking strategies of Bejeweled Blitz exhilarating and addictive. And when I say addictive, I mean really addictive. The one minute quick fire rounds, in conjunction with the satisfying sound effects made by the jewels, really give BB that “one more go” sort of feel.

The addictive nature of Bejeweled Blitz is also helped by the sense of progression that the game offers. You gain levels as you increase your lifetime score, and you can also earn coins that let you buy boosts. These boosts help you increase your score in various ways, such as giving you extra time or free special gems at the start of the round. They’re a nice addition that give you something to work toward, but there is a rather limited selection of different boosts to choose from. The main thing that will keep you coming back is the game’s Facebook connectivity. Between weekly competitions and friend leaderboards, you’ll find yourself coming back to Bejeweled week in week out to make sure you don’t get schooled by your chums. 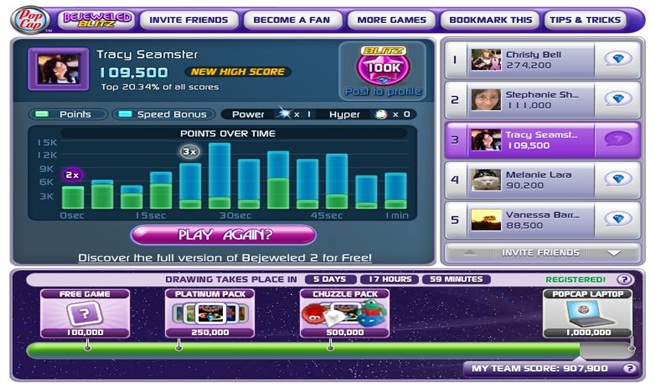 The leaderboards will keep you coming back

Yet this Facebook malarkey is where BB starts to slip in my estimations. Bejeweled Blitz is a free game you can play over Facebook. Despite this, the disc copy costs you £8 and doesn’t really warrant such an excessive price tag. The RRP isn’t much, but when all you get are achievements, full screen support and a one million coin bonus, it really feels like false economy. In all fairness the achievements add to the addictive quality of the game even more, and it does look very nice at a high resolution when run in full screen. Despite this, having to pay for a free game prevents me from being able to award Bejeweled Blitz the higher score it deserves. Based on its own merits BB deserves a score up in the eight out of ten region, but charging for a free game feels wrong and caps the score somewhat. 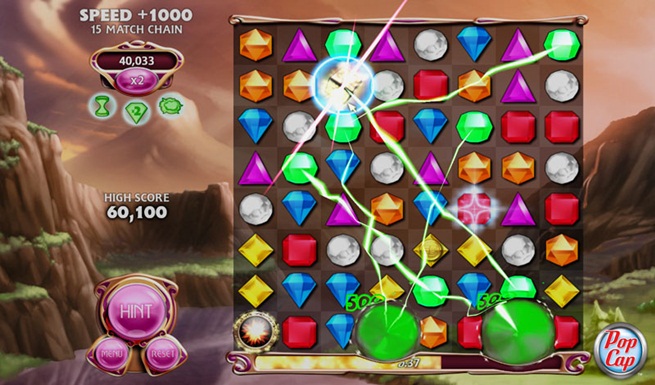 As fun as it all is, paying for a free game is never right

Bejeweled Blitz states on its box that it offers “one minute of endless fun.” Whilst each round lasts for one minute, the slogan is just wrong. With its addictive gameplay and accessible nature, Bejeweled Blitz is certain to keep you coming back for more time and time again. That said, I’d recommend you avoid the disc version. Though its price is reasonable, practically everyone has access to Facebook these days. BB is a great game, but make sure you play it via the free, but equally enjoyable, Facebook app.

Satisfying visuals and sound effects, Looks very crisp at higher resolutions, Extremely addictive, Competing with your friends over Facebook is a blast, Easy to learn but hard to master

Final Verdict:
MEDIOCRE
The puzzle game sensation distilled into a one minute rush, Bejeweled Blitz is one of the more strangely addictive titles I've ever played. Yet, with a free version available on Facebook, the hard disc copy seems extortionate and irrelevant
A copy of this game was provided by Developer/Publisher/Distributor/PR Agency for review purposes. Click here to know more about our Reviews Policy.