Back in 2009, in an attempt to increase the hype surrounding the 3D re-boot of Bionic Commando, a small 2D re-imagining of the classic NES side-scroller was released for XBLA, PSN and PC. The irony was that the little 2D advert turned out to be much more enjoyable than its 3D counterpart, and it is thus that the sequel to Bionic Commando: Rearmed is now available on XBLA and PSN.

BC:R2 is set sometime after the events of the original game with Spencer now commanding his own unit of bionic soldiers. After hearing reports of a missile threat from an offshore facility the FSA sends in a team to investigate but, after losing contact with them, Spencer and his unit are sent in to finish the job and locate the missing FSA soldiers. The plot is pretty standard, but it is almost entirely unnecessary anyway in a game like BC:R2. Right from the word go you can tell that the game wears its retro pedigree on its shoulder with a stunning 2.5D perspective mixed with some chirpy 8-bit tunes straight out of the NES era. 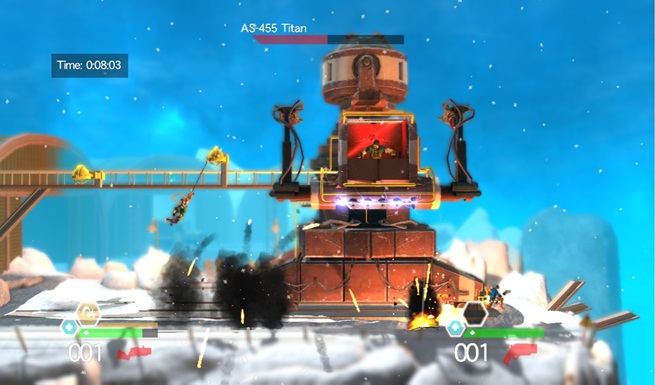 Though they take some getting used to, the swinging mechanics are darn satisfying

BC:R2 plays out much like its predecessor. The game is a 2D side-scrolling shooter with an emphasis on the protagonist’s bionic arm that he can use to climb and swing his way round the levels. Along the way you also find new weapons you can use against your foes, along with a series of passive and active upgrades for you to find. The engine generally works well and has a beautifully simple old-school charm, but it is not without its problems. The game can be devilishly unforgiving in its mechanics and, though it’s an enjoyable part of the experience for those desiring a retro platformer, BC:R2 is certainly a game that is not for the faint of heart. There is also the problem of repetition for, despite the needed variety added by the various upgrades, the game still tends to feel stale in long bursts. We also have the issue of managing upgrades. The weapons are easily switched between with the two bumpers, but your active upgrades require you to tediously open the menu every time you want to change what you have equipped. Finally, and worst of all, there is a severely game breaking glitch in one of the aztec ruins levels. A few dodgy sprites or sounds is acceptable, but a full system freeze at one consistent point in the level is unforgivable. Maybe this was a one off thing for me, but it is certainly worth factoring into your decision of whether or not to buy BC:R2.

Though the game is largely just a continuation of what we enjoyed about the first game, there are a few new features to get excited about. There are, of course, the upgrades mentioned above. Whether it be a passive health regen, a grenade launcher, or a ridiculously powerful uppercut the upgrades keep you developing new tactics to get the jump on your foes. There is also now the ability to jump. It might not sound like much, but it really does help make the game’s difficulty that little bit more manageable. It does also open up the game for the hilarious achievement/trophy of finishing the whole game without jumping. Your skills will be tested. One of the bigger improvements BC:R2 makes on its predecessor has to be in level design. Whereas the first game was composed of levels that all looked identical, there is a decent amount of variety in the way that the stages now look with jungles, snowy mountains and generic military bases all getting a mention. The levels are better designed than before, both visually and in terms of gameplay

There are a few things missing from the original Bionic Commando: Rearmed though, which rather saddened me. For a start there is no longer a non-linear world map. In the original you could take on the levels in any order but would have to return to some with better power ups to access them later, in a familiar Metroid or Castlevania style. In BC:R2 however, this is not the case. There are multiple routes through each level that require abilities you gain later in the game, but the game generally feels much less open ended than its predecessor. The hacking mini-game from the original is also gone. This isn’t too bad in itself, but it has no alternative that takes its place in Rearmed 2 adding to the occasional monotony of the game. For all the ground that BC:R2 makes, it’s a shame it lost some of what made the first game so enjoyable.

Another thing that the has been lost from the original for BC:R2 is the low retail price. Rearmed 2 is at the premium price point for download titles running you either 1200 MS point or $15 on the PSN. In a way this isn’t too bad as there are quite a number of levels for you to go through along with the fun little challenge rooms we saw in the first game, but it still feels odd being charged so much when the original was cheaper. It’s worth trying the demo to see how you get on with it but, if you do enjoy it, BC:R2 does justify its relatively high price with the amount of content on offer; just about. If the game isn’t long enough by yourself you can always go through the entire game with a friend. Though there is no co-op over Xbox live or PSN there is local multiplayer, but I’d personally take a real buddy over an online one any day. 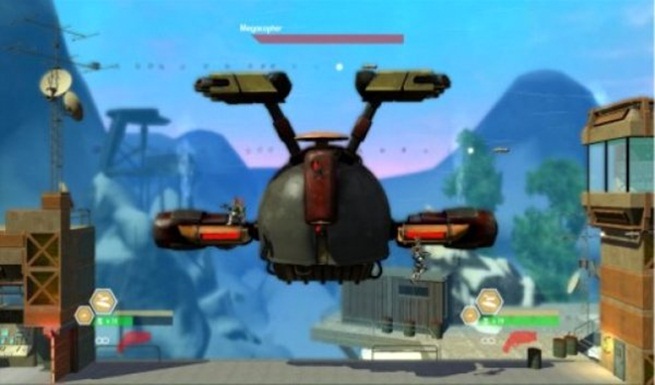 The boss battles are back and are as memorable as ever

BC:R2 is following a rather recent trend in bringing gaming back to its 8-bit roots, and it does this extremely well. The downside is that it will very clearly divide its potential fan base. For people like myself who grew up with the NES and Mega Drive there is a certain charm and enjoyment in this game that can’t be denied, but those of a more modern inclination may just find the game a little taxing in the difficulty department. Thankfully that’s what free demos are for so, if you are unsure, check out the demo on XBLA and PSN now. If you liked the previous one then it’s a bit of a no-brainer. Just go for it and revel in the nostalgia.

Final Verdict:
SUPERB
Classic 2D action at its best, the bionic commando returns for a sequel that offers more of the same old-school platforming action. If you can get over some frustratingly rustic jumping sections, BC:R2 is a majestic slice of side-scrolling heaven
A copy of this game was provided by Developer/Publisher/Distributor/PR Agency for review purposes. Click here to know more about our Reviews Policy.