Is Black Knight Sword worth your time?

Presented as a side scroller Black Knight Sword actually looks like a user created level from Little Big Planet. The GUI is presented as if the player is watching some sort of play in a theater, and you’re either watching a marionette show or a stain glass window effect, or maybe even actors, but the last one may be a stretch.

The art style feels very abstract, and although some things like the Knight’s sword is cool looking, the big head minions are quite ugly. Sometimes the art looks like someone got carried away with a heavy black pen and went to town with cross hatching. The overall feel of the art is good, but a little bizarre at times.

The mechanics work like any typical side scroller. You have a basic attack, a double jump, magic that can be used sparingly, and a ghost like figure that can either do an area effect, or turn on/open objects for you. With a combo you can evade your enemy, but I found it to be tricky. You can only evade back from an enemy instead of forward and past an enemy. In the case of fighting a giant knight, it works fine to go in for the kill, evade back to avoid a heavy hit and then go back in. In cases where you get attacked by wolves it would have been better to evade past them as they jumped in the air. Instead the mechanics, seeing the wolf as still in front of you, despite it being in the air, would only allow you to evade back, and in most cases right where the wolf would land. 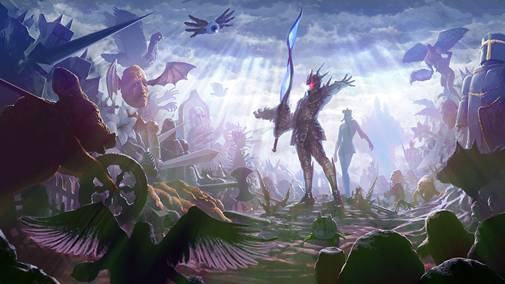 Another feature to collect are Cat Head Grass. They are hidden flower pots with cat heads, scattered about each level. You gain nothing special from finding them, however in the main menu you can select a gallery to look at them and so far, is on pair with making no sense to the game.

For the most part this has got to be one of the most confusing games I’ve come across in a while. Cut scenes are very much like Katamari cut scenes in the sense that it doesn’t make sense and has almost nothing to do with the game itself. You start to get the feeling that the game may have created in a foreign language and poorly translated. There’s a sense that at times it wants to make sense, and then they go and throw a microwave in the levels that spit out hearts to collect. Although collecting the hearts is part of the game, the microwave is a 3D object, unlike the rest of the flat world and just doesn’t make sense. That also goes for the multi colored 3D doors.

There are times when you come across trapped flying things as I’m not sure if they were fireflies or birds or whatever. When you release them you go into a store that again makes very little sense. You can buy health, extra life, extra magic, extra defense, and more as long as you have enough hearts to feed the circular thing with a mouth that speaks broken English.

The problem with the store is that they are pretty rare, and precariously placed. It makes no sense why you would put the store at the beginning of a level where you have no need to replenish your health yet, nor do you have enough hearts to buy anything. With health being so rare, the store would be better suited for a mid level break. 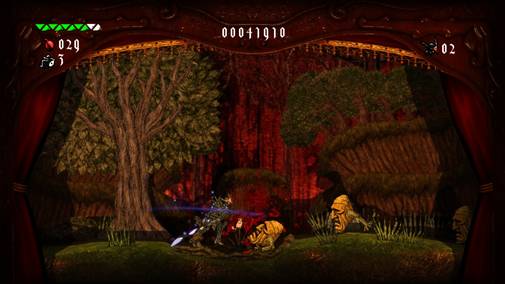 At times the game can be down right brutal. Some bosses are rear impossible to beat, but you’d be lucky to get to them. In the third stage you have to jump across fast moving gears, and if you fall off them you drop to the bottom level where pistons crush you dead very quickly without any chance for recovery. With a low level of lives, this mistake can be costly and you may be forced to restart the entire stage. The difficulty is pretty drastic, and if you find that it’s too much for you, there is no option to change it. If you want to change your difficulty level you must start a new game.

Black Knight Sword may be the perfect game for anyone out there who prefer side scrolling games that feel like they got lost in translation. Although the mechanics can be tricky at times it is very challenging and would not be recommended to a person who is not good at starting games on hard core mode. In the end the game really looks like it was created by a dark tortured artist from Little Big Planet who was forced into a dungeon and forced to make a game regardless of their dialect. If this is the case, please play this game to set that poor fella free. If that is not the case, you can just skip this game.

Side scrolling mechanics is pretty good, seems to have inspired from LittleBigPlanet.

Final Verdict:
FAIR
Black Knight Sword is an abstract game that seems lost in translation.
A copy of this game was provided by Developer/Publisher/Distributor/PR Agency for review purposes. Click here to know more about our Reviews Policy.