Posted By Will Borger | On 24th, Nov. 2013 Under Article, Reviews | Follow This Author @will_borger

It’s hard to believe that there was ever any doubt that the modern military shooter would become The Next Big ThingTM, but the world was a very different place in 2007. Sure, there were modern shooters then too, but by and large the genre was dominated by World War II games like Medal of Honor or Call of Duty, or science fiction titles the ever popular Halo series. So when Activision announced that the fourth game in the Call of Duty series would trade its World War II roots in for a modern setting, people were concerned. Despite the growing dissatisfaction with the number of World War II games on the market, many fans were worried about how the title would make the transition, and some questioned the series’ ability to survive outside of that time period.

Of course, in hindsight, that all seems rather silly. Call of Duty 4 went on to sell more than ten million copies, and garnered a level of critical acclaim few games have managed to achieve, before or since. Since then, the franchise has gone on to dominate the sales charts year after year, and many of the series’ staple gameplay elements have been borrowed by nearly every major blockbuster title on the market. As the years have gone one, more and more military shooters have appeared, each trying to snag a piece of Call of Duty’s enormous pie, and many long running franchises, including the previously mentioned Halo series, have altered core parts of their gameplay in an attempt to emulate Call of Duty’s successes and draw in more players. 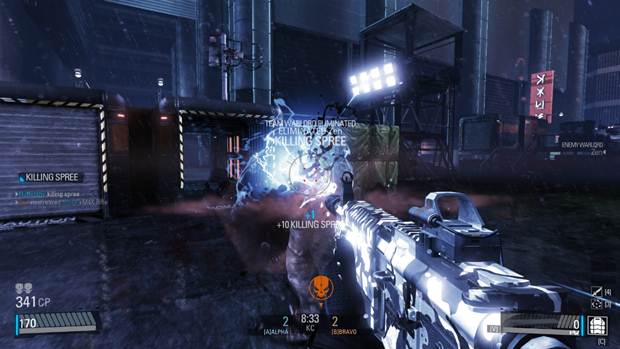 "Unlike its predecessor, the game is entirely focused on competitive multiplayer, and while the game doesn’t do anything particularly new or unique, it does provide a very polished experience that has all of the bells and whistles that players have come to expect from modern shooters."

This brings us to Blacklight: Retribution, a Free to Play title developed by Zombie Studios, and the sequel to Blacklight: Tango Down. In some ways, it’s rather surprising that Retribution exists. While its predecessor wasn’t a bad game by any means, it was a rather unremarkable military shooter in a genre that has quite a few quality titles under its belt. But every now and then, a game developer gets a second chance, and Zombie Studios has certainly made the most of theirs.

In many ways, it’s hard to believe that Retribution was developed by the same team; the differences in quality are that great. Unlike its predecessor, the game is entirely focused on competitive multiplayer, and while the game doesn’t do anything particularly new or unique, it does provide a very polished experience that has all of the bells and whistles that players have come to expect from modern shooters. Indeed, if you’ve spent any length of time with a modern shooter released since 2007, you’ll have a pretty good idea of how Blacklight operates. If you haven’t, fear not: Blacklight makes it pretty easy to jump in and begin playing. Once you’re in the game proper, you’ll play through the game’s tutorial.

It’s fairly standard stuff, and bears more than a passing resemblance to Call of Duty 4’s cargo ship tutorial, but it’ll get you up to speed on the game’s mechanics. Once you get through that, you’re free to jump into the game itself. That is, after you get through the rest of the game’s text-based tutorials that pop up whenever you enter a new section of the menus. These are long and fairly tedious to get through, and while the game does give you the option of turning off tutorials entirely, you’ll likely need them to understand how all of Backlight’s menus, options, and systems fit together. 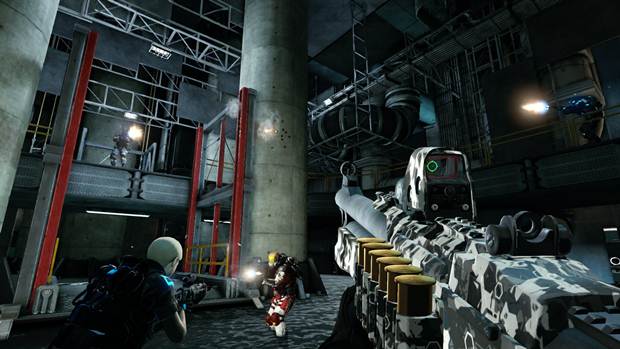 "Blacklight: Retribution’s gameplay is just as good as its map design. Veterans of military FPS games will feel right at home here, and while Blacklight doesn’t do much to change up the standard gameplay formula, everything works well."

Once you get everything figured out, it’s time to jump into a game, and thankfully, Blacklight offers a wide variety of modes to play. FPS mainstays such as Team Deathmatch, Capture the Flag, King of the Hill, and Domination make an appearance, but modes like Siege, Kill Confirmed, and others add a bit of spice to the mix for players who want something a little different. The game features a server browser which makes it easy to find the gametype you want, as well as quick match option for those who want to get right into the action, though choosing the latter will mean that you’ll pretty much exclusively be playing Team Deathmatch.

There’s also a fairly decent selection of maps to choose from, and just as with the gametypes, you’ll be able to find specific ones through the game’s server browser, though it should be noted that all of Blacklight’s maps are worth playing, which is an impressive achievement in and of itself. Each map is intelligently designed and offers a lot of verticality, meaning that you’ll be able to approach each one in a manner that suits your playstyle. In a rather unique twist, teams can open and close doors on each map by completing a simple hacking minigame, meaning that the battlefield is always changing, and that certain chokepoints may only be available at certain times in the match, so you’ll have to pay attention and make the most of the paths open to you if you want to do well.

Blacklight: Retribution’s gameplay is just as good as its map design. Veterans of military FPS games will feel right at home here, and while Blacklight doesn’t do much to change up the standard gameplay formula, everything works well. However, that doesn’t mean that the game doesn’t have any unique ideas of its own. Each player comes equipped with a visor that allows you to see all of the players on the map for a limited time, even if they’re behind walls, making it easy to avoid the frustration of rounding a corner only to find yourself staring down five members of the enemy team. This also adds a welcome layer of strategy to the proceedings, and smart players will use it often when setting up their attacks on the enemy. 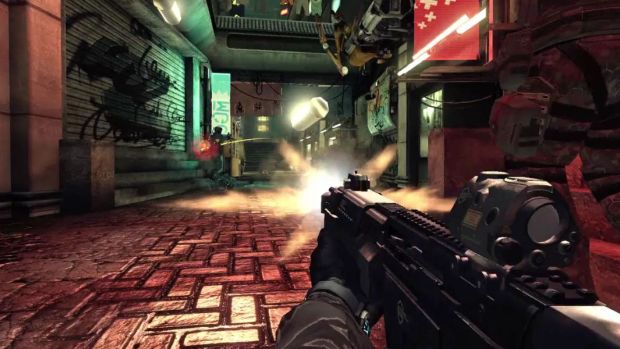 "All of Blacklight’s gameplay is complimented by excellent visuals and sound design. Guns feel good to shoot, and provide a great level of visual and aural impact, while character models are impressively rendered and varied, as are the various explosions and fire and lighting effects that populate the levels."

The game also provides an interesting take on killstreaks and mid-match player rewards. As players earn kills, capture objectives, and help out their team, they’ll earn CP, a form of currency that can be used to buy temporary bonuses at depots scattered throughout the map. In addition to simple functional upgrades, such as more health and ammo, you’ll also be able to buy flamethrowers, miniguns, automatic turrets, and rocket launchers.

You don’t lose CP if you die, which adds an extra layer of strategy to the game. Do you spend your money early for a powerful weapon, or save up for the Hard Suit, an enormous mech that comes equipped with a railgun and a minigun? This may sound overpowered, but getting into a Hard Suit is a considerable risk: in addition to losing your visor, you’ll also be a slow, unwieldy target for the other team, and it only takes a couple of well placed rockets to bring one down, which is all the more frightening when you consider how cheap a rocket launcher is compared to a Hard Suit.

All of Blacklight’s gameplay is complimented by excellent visuals and sound design. Guns feel good to shoot, and provide a great level of visual and aural impact, while character models are impressively rendered and varied, as are the various explosions and fire and lighting effects that populate the levels. Even simple things, such as kill cams, have a bit of added flair, which each death offering a slow motion, Matrix-esque replay that looks as impressive as it sounds. 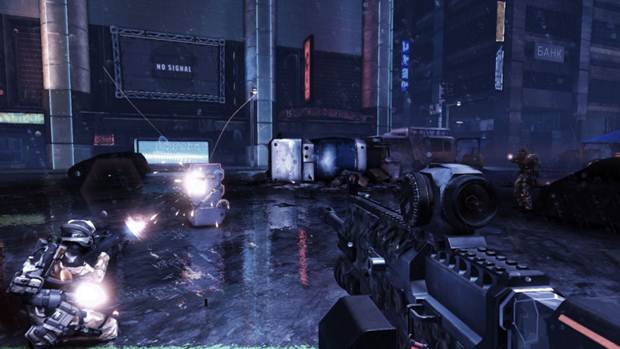 "Blacklight can stand next to Tribes: Ascend as one of the best Free to Play shooters on the market, and one of the most fair implementations of the Free to Play model currently available."

Winning or losing a match earns you GP, which can be spent in Blacklight’s in-game store on anything from guns to visual upgrades for your character. The game offers an almost unreasonable amount of customization, allowing you to build weapons entirely from scratch, choose what items appear in your depot, and even buy new emblems and emotes that can be shown off at the victory screen. You can also purchase items with Zen, which you’ll buy with real money, and while many of the game’s items can be unlocked via GP, certain cosmetic upgrades can only be purchased with Zen.

Still, players who don’t want to shell out needn’t worry: you’ll be able to access most everything with GP, though it should be noted that you’ll have to grind a really, really long time to purchase things that way. Thankfully, Blacklight also allows you to rent items in one, three, and seven day increments, meaning you can try before you buy. That said, the game is fun with just the starting equipment, and there’s nothing about Blacklight that’s pay to win. Bullets are just as deadly when fired from a “free” gun, after all.

Of course, the game isn’t perfect. There are occasional lag spikes, and the game will occasionally slow down in firefights or when you activate your visor. This is infrequent, but it’s extremely frustrating when you die because the game doesn’t feel like loading you into and out of your visor in a reasonable amount of time, or when you find yourself unable to move in the middle of a firefight.

Still, these are ultimately minor complaints against a game that knows what it wants to do and does it well. Blacklight can stand next to Tribes: Ascend as one of the best Free to Play shooters on the market, and one of the most fair implementations of the Free to Play model currently available. If anything, the major problem with Blacklight is its own lack of ambition. It still feels too much like a military shooter to win over those who don’t like genre, and it doesn’t do enough to differentiate itself from the other games in its genre, which is already oversaturated as it is. Still, it’s a very well-made game, with great gameplay and good production values, with enough unique features to make it worth checking out. Just don’t go into it looking for something new.

Excellent gameplay. Maps are well-designed and offer many ways to play. Good visual and sound design. An interesting take on killstreaks. The Hard Suit is fun to use and well-balanced. Good use of the Free to Play system. Renting items lets you try before you buy. The visor adds an extra layer of depth and strategy to the game. An insane amount of customization.

It takes a long time to unlock things with GP. The frequent tutorial popups can be annoying. The game occasionally freezes when entering a firefight or turning on your visor. Doesn’t do a whole lot to differentiate itself from the other military shooters on the market.

Blacklight: Retribution is a good shooter with an excellent Free to Play system, even though it doesn’t offer a whole lot to differentiate itself from the other military FPSes on the market.

A copy of this game was provided by developer/publisher for review purposes. Click here to know more about our Reviews Policy.
Tagged With: Blacklight: Retribution, pc, ps4, Zombie Studios