First off, I just want to get it out of the way that BloodRayne: Betrayal has little relation to the original retail game that had mixed reviews.  BloodRayne: Betrayal is an arcade and strictly plays like one being a platformer, hack ‘n slasher that is nothing like the original game. You once again take on the role of Rayne, a ‘dhampir’ who are half breeds (human/vampire) and have similar powers to a vampire without many of their weaknesses, but still can suck the blood from the living. Sucking blood from enemies in the game is one way to restore your health in fact.  Any fan of difficult arcade hack ‘n slashers, will love this title.  The difficulty can even be compared to an arcade titles like Dead Samurai or the old Castlevania games.  Either way you will have to get used to Rayne’s many attacks that are easy not to see if you don’t look deep enough into the game and its move list.

BloodRayne: Betrayal relies on precise moves a lot of the time, with her having to navigate deadly obstacle courses by doing different things such as jumping on the heads of bats to get her to safety.  One small mistake in timing will lead to death and this goes for combat many times as well.  The game definitely tends to a certain type a gamer who strive to master the difficult arcade style games.  Without taking advantage of combos and many of her special moves you will surely fail as the game is much, much more than a light/heavy attack type of hack ‘n slasher.  Rayne also has the ability to use a range weapon at times but this is limited as the games basis is around you using your swords.  She can also turn into a bat at certain times letting her easily navigate higher areas or dangerous obstacle courses. 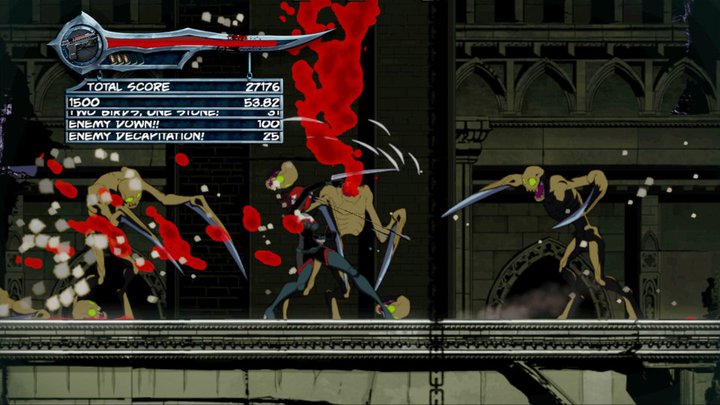 Rayne has many attacks…

As much as you must master the controls and combos, Raynes animations cannot be interrupted which can lead to your death in certain situations.  For a 2D platformer, the graphics are uniquely awesome as well as all the combat animations and Raynes movements in general.  Just simply entering a level is cool as you launch in from the sky in your coffin as it slowly opens after landing revealing yourself ready for battle.  The game also has Rayne doing plenty of acrobatic moves like back flips, wall grappling and more that add to all the different mechanics in the game that you really need to delve into to not only survive, but enjoy.  You can upgrade Raynes abilities as you move through the game as well as gaining new abilities and getting new ranged weapons.

The game even has replay value as you can go back and continue to upgrade Rayne, grab of the collectables and conquer the high scores on the leaderboards.  I was not kidding when I mentioned that, the game tends to a certain type of gamer, because if you are all about the easier next generation retail games than this is not for you.  If you where a fan of the old Castlevania games for NES or even a fan a Dead Samurai, you will absolutely love this game.  It takes the aspects from those old, difficult arcade action platformers and ups the ante with Rayne moving across the screen at lighting speeds, dashing away only to come back with a killer combo, annihilating multiple enemies.  Master her combos, along with her acrobatic skills and throwing in her occasional ranged attack and you will surely have a blast.

Controls can be difficult and awkward at times and even unavoidable.

Final Verdict:
SUPERB
BloodRayne: Betrayal is an ode to the old school 2D action platformer that is difficult, yet satisfying. The game is for people that love this style of gaming and will not disappoint those who are fans of games like Dead Samurai or the old Castlevania games.
A copy of this game was provided by Developer/Publisher/Distributor/PR Agency for review purposes. Click here to know more about our Reviews Policy.