As plots go, Bodycount’s is pretty forgettable. As far as I can see it’s got something to do with you working for a clandestine organization called The Network – the guys who are sent to tackle conflicts in places that even governments and conventional forces dare not tread. It transpires that you’re hunting a malevolent nemesis known only as the Target. That, in a nutshell, is all you really need to know. Now you can concentrate on the true crux of the game, shooting anything and everything. 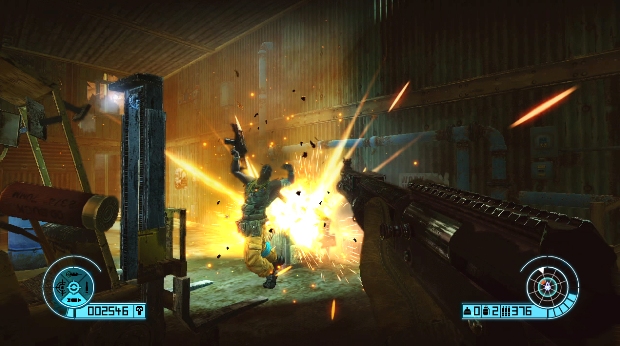 Some reviews have been fairly critical of its weak storyline, pallid graphics and one dimensional gameplay but I’ll admit that I actually enjoyed Bodycount. It’s not the best of its kind and is overshadowed by the likes of People Can Fly and Epic Games’ Bulletstorm for its skillshots and explosive action, but it’s still a fun shooter nonetheless. Despite its brevity it’s an enjoyable romp.

Graphically, it’s not going to win awards but it looks bright and bold. Occasionally the textures can look poor and close up, the visuals can look a little last gen. The style reminds me a little of Brink from earlier this year; your adversaries almost cartoonlike in their appearance. The scenery is destructible – or shreddable – meaning you can destroy doors and walls by riddling them with bullets or blowing up explosive canisters. Like all games of this type, flammable barrels are commonplace so there are plenty of opportunities to wreak havoc and blow up multiple enemies. 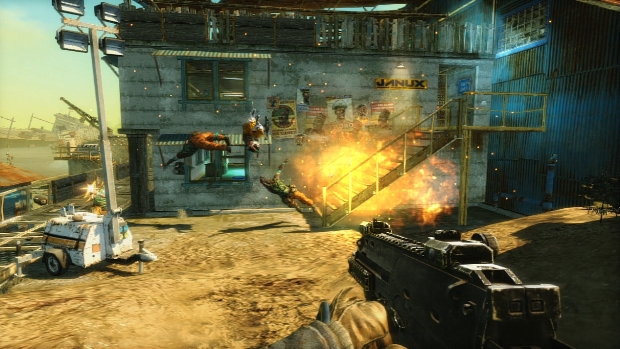 Every enemy kill leaves several glowing orbs on the ground – this “Intel” can be collected to fill a power meter at the bottom of the screen. As you progress, four special abilities will be unlocked that can only be used when you have sufficient Intel. Adrenaline, explosive bullets, airstrikes and pulse waves are all activated using the D-pad and may help you out in the midst of a firefight. Adrenaline provides a temporary speed boost and makes you immune to bullets, whereas explosive bullets do exactly as you’d expect. The others are rarely used and, as such, pretty forgettable.

To increase your Intel haul you’ll have to pull off some skill shots and dispatch enemies in devastating fashion. More points are awarded for big explosions, headshots, shooting someone in the back or when you’re just about to die. Chain kills together and you boost your overall score – as indicated by a points multiplier in the top left of the screen.

This isn’t too tough although the chain breaks when you kill someone in a boring fashion or die yourself. And you’ll die lots! Enemy gunfire can come from all angles  although it’s often difficult to see who’s shooting with the bad guys sometimes difficult to distinguish from the colourful backgrounds. Another quibble is the game’s cover mechanic, which sees you lean to the side and peek out from behind objects when you press a shoulder button. It’s a nice idea but feels a little awkward and ironically, often leaves you exposed. Odds are, if you adopt the all guns blazing approach you won’t use this much either.

A summary screen pops up at the end of each mission, highlighting combos, skill shots performed, and an overall grade – perhaps providing some incentive to replay but otherwise it’s largely superfluous. It seems a little strange blowing things up, unleashing merry hell and then getting penalized for not accruing a high enough score. Opt instead to take your time and pick off bad guys with headshots and you’re kind of missing out on the fun and arcadey feel of the game.

Only a small selection of weaponry is at your disposal and I found myself sticking to the standard machine gun for most of the game. Ammo seems to be in unlimited supply so you never really feel under pressure to place your shots carefully – again flying in the face of the combo/skillshot mechanic. A limited supply of grenades and some mines are stashed in your inventory, which prove particularly handy when you have to “assassinate” some of the big NPCs that appear every now and again or large groups of enemies. 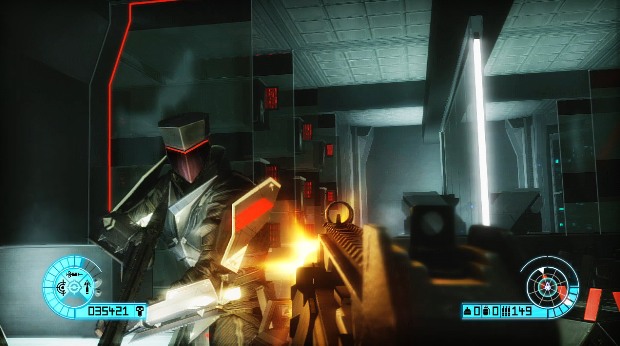 The campaign takes you through Africa, Asia and Tron-like levels

Ultimately, it’s a case of complete an objective then backtrack across the map to complete another – killing bad guys with ropey AI along the way. Rinse and repeat. And it does get repetitive. There’s very little variety with few enemy character types, guns or environments there to reduce the monotony. One saving grace for achievement hunters is that the game positively spews accolades at you – awarded for simple story progression or killing the requisite number of enemies.

Bodycount doesn’t quite live up to the pre-release hype  – and it’s no Black – but it is fun to play… in short bursts. The campaign won’t take too long to complete and, although there are scant multiplayer options, the online mode does offer some extra playtime (if you can find people to play against!). For a pick up and play game that provides a quick adrenaline rush, it’s not bad at all and is certainly worthy of a rental at least.

Easy to pick up and play, with very little thinking required. FPS fans will love the shooting and destruction, and "shredding" the scenery is a nice touch

There's little plot, the graphics won't win prizes, and there's little longevity. It promised so much but there aren't enough guns or gaming modes

Final Verdict:
FAIR
Dubbed the spiritual successor to the classic 2006 shooter Black, Codemaster’s Bodycount is light on story and focused solely on death and destruction. A winning formula, wouldn’t you think?
A copy of this game was provided by Developer/Publisher/Distributor/PR Agency for review purposes. Click here to know more about our Reviews Policy.