Posted By Shubhankar Parijat | On 09th, Sep. 2019 Under Article, Interviews

The metroidvania genre has undergone a veritable resurgence in recent years, thanks mostly to the efforts of indie developers. But though there’s no shortage of games in the genre on the market, it’s hard to turn down a metroidvania title that’s designed well and comes with a unique aesthetic of its own. Bookbound Brigade subscribes to the metroidvania design philosophy, but it seems to be doing a lot of unique things in various ways that might help it stand out in the crowd. We recently sent across some of our questions about the game to the developers at Digital Tales- read our conversation below. 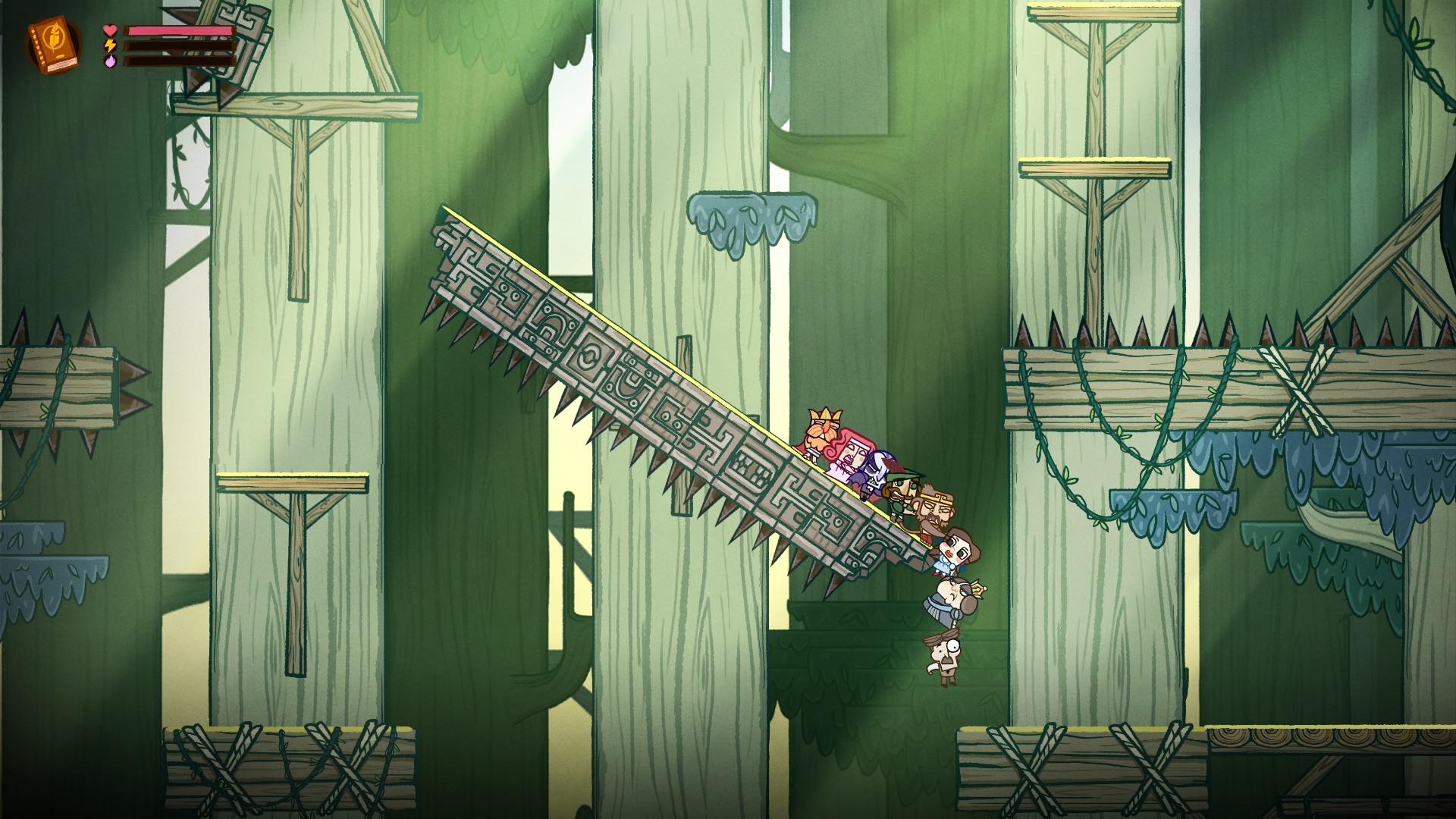 "Our goal was to develop a Metroidvania game revolving around the Brigade concept, as opposed to the player controlling a single character, which is usually the case. We also aimed at making the genre more friendly and accessible for non-hardcore gamers."

Bookbound Brigade has such a unique concept, both in terms of its basic premise and the way it translates that to gameplay. What was the process like for coming up with that and deciding what it would mean in terms of how players are actually interacting with the game?

Our goal was to develop a Metroidvania game revolving around the Brigade concept, as opposed to the player controlling a single character, which is usually the case. We also aimed at making the genre more friendly and accessible for non-hardcore gamers.

The literary and historical setting as well as the Brigade mechanics make it stand out from the competition, while the combat, platforming and action elements are intended to attract fans of the Metroidvania genre, with well-established and familiar gameplay features.

The most defining and innovative gameplay element is the Brigade itself: the player controls eight characters at the same time and can change their formation on the fly, deploying them in Standard (compact), Line, Column and Wheel formation. The formation choice will be a key strategic element, equally affecting combat, puzzle solving and platforming.

The Brigade members have individual stats and skills, but a physical connection keeps them together at all time and affects their behavior during gameplay (“One for all, all for one”).

The enemy A.I.s and the level design were structured around the Brigade mechanics and a strategic use of the formations: they constantly challenge the player to find a creative solution to any situation in the game, puzzle, platforming sequence or fight.

Map size and design are crucial elements for any game subscribing to the metroidvania design philosophy- can you speak to us about Bookbound Brigade’s approach to both those things?

The Ancient world is where ancient civilizations like the Romans, the Egyptians and the Greek exist as one. It’s a place of ancient wisdom and spectacular architecture. The Sea world is where every tale of the sea is housed, a place of cut-throat pirates and salty sea dogs. The Victorian world is an alternate Victorian London featuring Steampunk elements. The Medieval world is a fantasy-inspired location embracing some of the most popular historical and fictional icons of the Middle Ages. The Library connects all the areas of the Literary World and holds the Thematic Books (magic portals) allowing the player to explore it throughout.

Players must explore each world multiple times in order to unravel the plot and gradually unlock new areas. For such reason, the difficulty increases following the story’s critical path. Each world also includes optional areas which can be explored by unlocking specific skills and backtracking. These areas usually have a higher difficulty level. 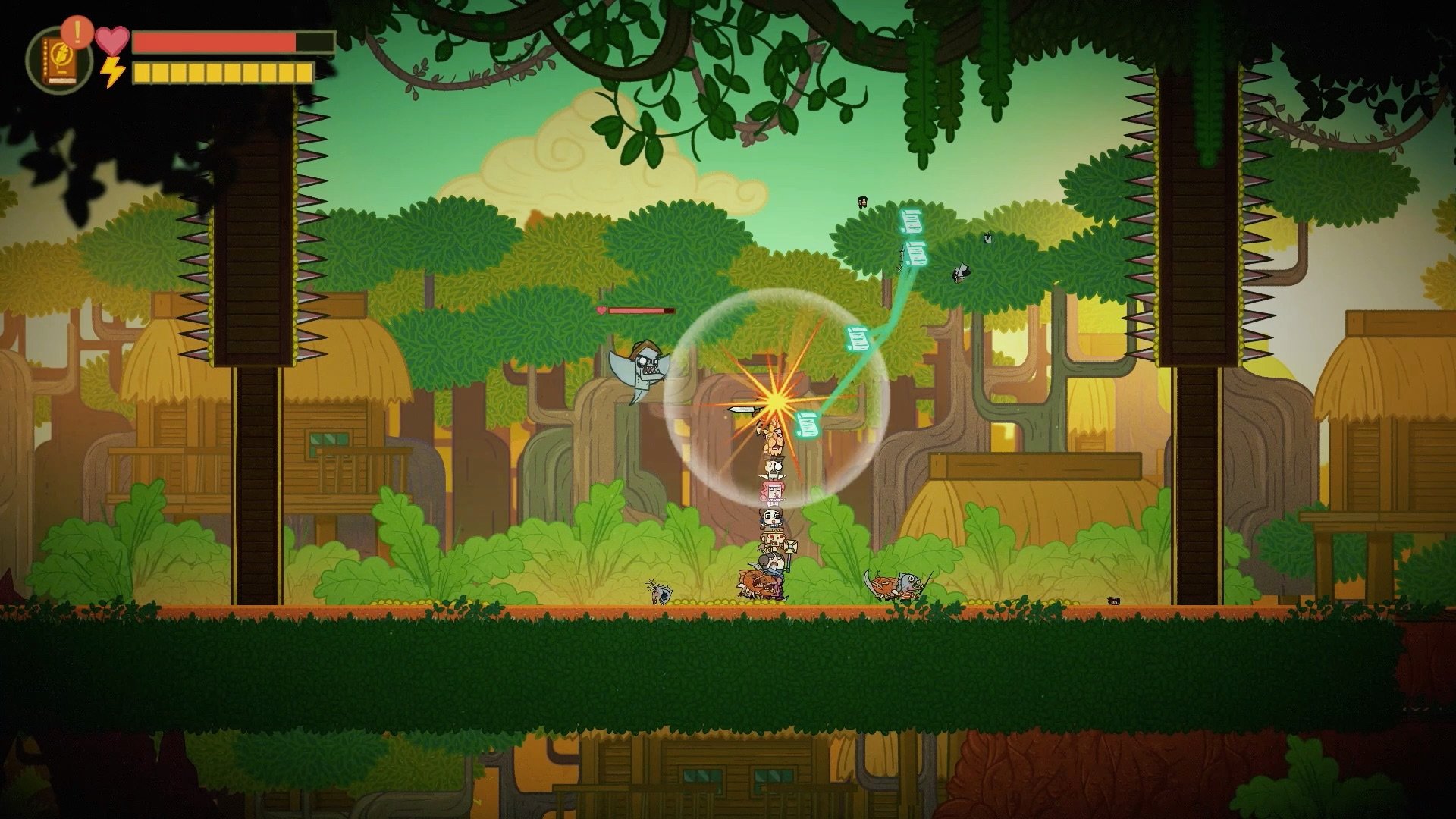 "The game constantly requires context analysis and pattern recognition: each platforming session, battle or puzzle can be faced in different ways, depending on the formations, skills and bonuses available to the player at any given time in the game. The main challenge for the player is to read any given situation and find the best approach to it."

How will players be traversing Bookbound Brigade’s map, in terms of platforming and any new movement that they might acquire throughout the game?

The Brigade members will always move around in formation, which equally affects combat and navigation.

The game constantly requires context analysis and pattern recognition: each platforming session, battle or puzzle can be faced in different ways, depending on the formations, skills and bonuses available to the player at any given time in the game. The main challenge for the player is to read any given situation and find the best approach to it.

By interacting with other popular historical and literary characters, our eight timeless heroes will gradually unlock skills, formations and bonuses which will allow them to explore the Literary World inside out and to fight more and more challenging enemies: by speaking with specific NPCs, in particular, each Brigade member can unlock two special skills (navigational and/or combat skills).

Each skill is related to a Brigade member’s background and features, but is used to the benefit of the whole Brigade. For example, the “Fly & Glide” skill is unlocked when Icarus reminds Dracula he can turn into a bat. When the player performs the Fly & Glide, Dracula turns into a bat and glides through the air bringing all the Brigade with him.

The player will need to learn how to leverage each member’s special skills and the Brigade’s formations in order to make his/her party unstoppable.

The metroidvania genre has seen a massive resurgence in recent years. Can you speak to us about what – if any – games have served as inspirations to you, both new and old?

We definitely looked back to the Castlevania series, not just for its gameplay but also for the use of tile-based graphics. Among the most recent releases, Guacamelee and Hollow Knight were good benchmarks for exploration dynamics and the difficulty curve.

Yet Bookbound Brigade is not your standard Metroidvania game and, thanks to its innovative Brigade mechanic, the 2D hand-drawn graphics and the unusual setting, it targets both Metroidvania fans and new-comers to the genre. So other games from other genres also heavily influenced Bookbound Brigade, such as Rayman for its colourful, cartoony and vivid graphics, or Super Mario Bros for its clean, tile-based visuals.

Can you talk to us about the various literary characters we’ll be seeing in Bookbound Brigade? What’s it been like to bring them together for this unusual narrative premise?

The Brigade members are King Arthur, Robin Hood, Count Dracula, Queen Victoria, Dorothy Gale, Cassandra, Nikola Tesla and Sun Wukong. As you can see, they’ve absolutely nothing to do with one another, which generates some very funny and unexpected situations. You start with five Brigade members and recruit three more as you progress through the initial areas of the game.

While exploring the Literary World, they will meet 51 NPCs, the most disparate historical and literary characters, ranging from Joan of Arc and Socrates to Captain Nemo and Dorian Gray.

Coming up with “alternative lives” for unbound characters was fun: according to the game’s story, all the protagonists of books have lost their memory as the Book of Books (the receptacle of any word ever written by man) has gone missing. So nobody remembers who they are and where they belong: for example, Julius Caesar doesn’t want anything to do with Roman politics anymore, he’s now in the restaurants business and wants everybody to try his world-famous, eponymous salad! 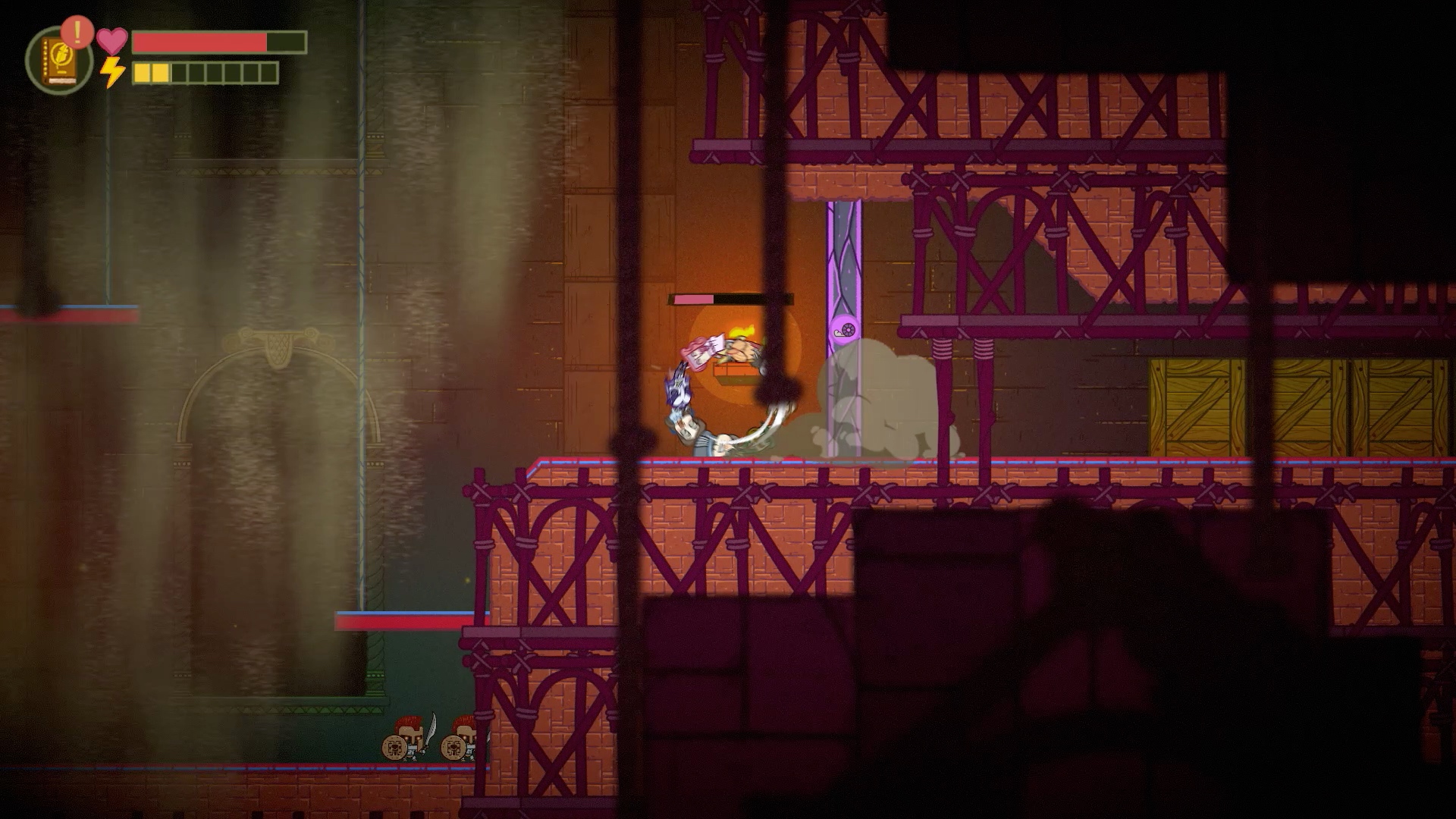 "Since Bookbound Brigade features some of the most iconic characters in world history and literature, we wanted to be as respectful of the source material as possible. So the “gamified” version of every character, including playing and non-playing characters, reflects his or her qualities and quirks. For example, Brigade member Nikola Tesla uses electricity-based skills and attacks, while boss Medusa petrifies her enemies."

How did you decide how each of these characters would express themselves in terms of gameplay mechanics, and abilities or attributes that might be unique to them? Can you give us a few of your favourite examples?

Since Bookbound Brigade features some of the most iconic characters in world history and literature, we wanted to be as respectful of the source material as possible. So the “gamified” version of every character, including playing and non-playing characters, reflects his or her qualities and quirks. For example, Brigade member Nikola Tesla uses electricity-based skills and attacks, while boss Medusa petrifies her enemies.

Some NPCs will teach special abilities to specific Brigade members: for example, Caesar can explain to King Arthur how to use the Famous Roman Testudo formation to defend the Brigade.

How much diversity in environments can players expect to see in the game?

Multiple historical and fictional themes collide in the game’s story and setting, so each world is a collection of visual elements inspired by specific time periods, styles and literary genres. Each world is also populated by NPCs related to such themes and genres. Our goal was to reach the highest possible variety in the game’s locations and consequently in the gameplay situations derived from them.

About how long will an average playthrough of Bookbound Brigade be?

It will take over 20 hours for a skilled gamer to play through.

Do you have any plans to eventually launch on the Xbox One?

Sure, we’ll be happy to port Brigade to Xbox One after launch, more so if the game is successful and there’s demand for it.

Is there a specific reason why you are not launching on the Xbox One for now?

Xbox One has been in our pipeline for Brigade since the beginning but, as a small indie studio, Digital Tales had to carefully manage its resources for a simultaneous multi-platform launch by prioritizing development across formats: we decided to start with PC and PS4, because we were already familiar with these platforms. Then we added Switch, because it has been establishing itself as a great platform for Metroidvanias lately, and we feel the game’s art style perfectly fits the Nintendo spirit. Xbox One will be coming soon and will benefit from the experience and feedback acquired on the other platforms. 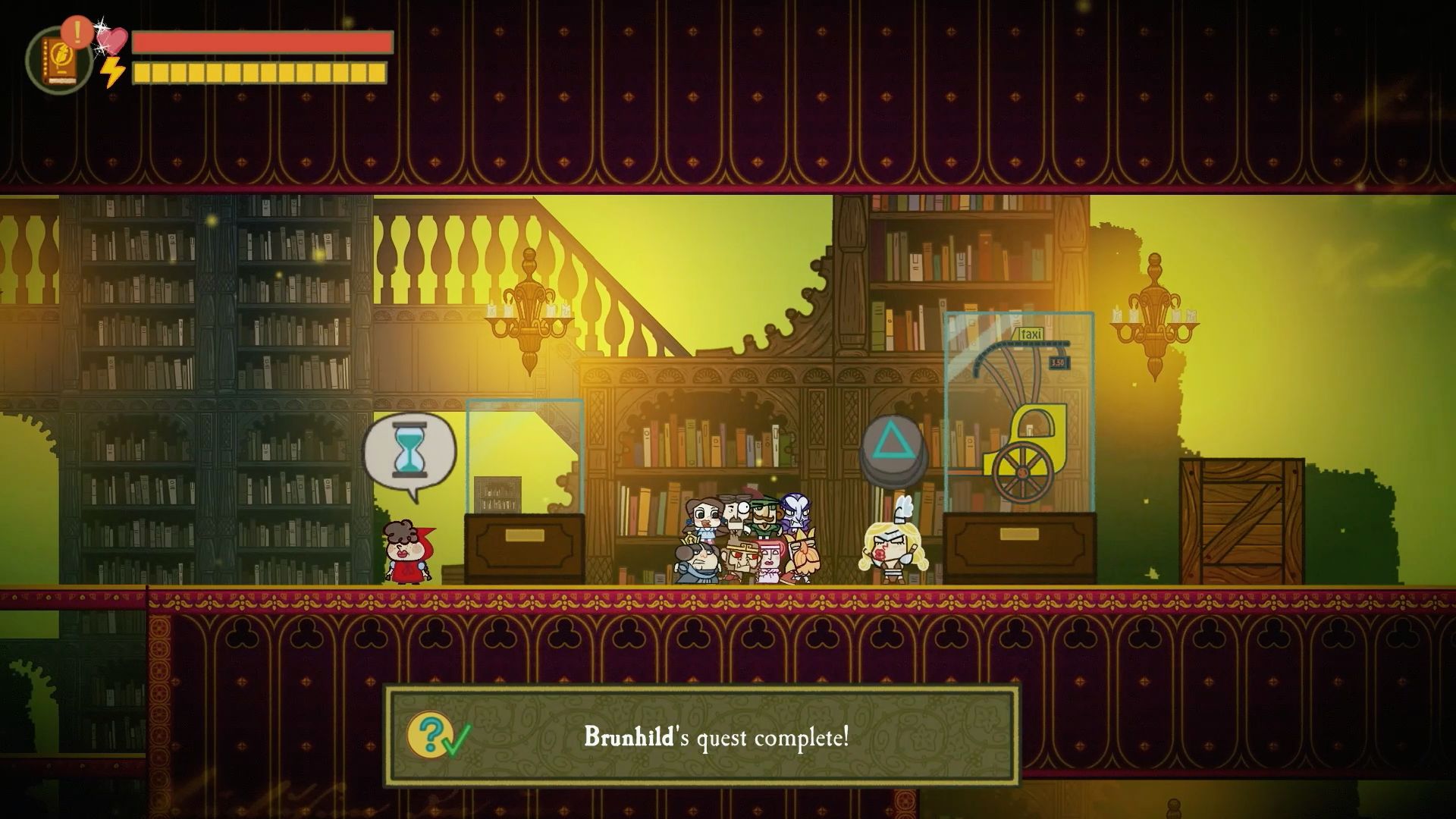 "Backwards compatibility is a great feature for developers and players alike. Bookbound Brigade is our first self-funded PlayStation game and the thought that it may run on PS5 right away is certainly reassuring. "

That wouldn’t make a big difference for a game such as Bookbound Brigade.

In the future, though, with newer versions of Unity burst compiler advantages will become huge, thanks to the heavier parallelization and higher frequencies & IPC that those chips can deliver.

Backwards compatibility is a great feature for developers and players alike. Bookbound Brigade is our first self-funded PlayStation game and the thought that it may run on PS5 right away is certainly reassuring.