When your game is compared to Diablo you have big shoes to fill. Still considered one of the best RPG’s to date; to be compared to it means you are doing something right. Borderlands manages, for the most part, to live up to the comparison. This Role Playing Shooter (RPS) excels at shooting, does a good job being an RPG, and has a fun world to explore. All of these aspects live up to the Diablo feel of the game, if only the story could do the comparison more justice.

The game takes place on the world of Pandora, its claim to fame being a rumored vault filled with riches beyond imagination. This vault has attracted many fortune hunters over the years, the most recent being you. You can select from one of four characters for your quest. The Soldier class is your standard run and gun class which will feel familiar from other First Person Shooters making him feel like the most natural selection. The Berserker is the close up specialist who chooses fists over firepower. The Hunter is a more ranged style class, in Diablo terms the Rogue. Last but not least is the Siren who uses the elements to her advantage. After selecting your character you begin your quests and are slowly introduced to the world.

Pandora is a beautiful world. While there is nothing truly unique about the landscape, the game has a beautiful art style that mixes realistic graphics with a hint of cel-shading. The game never looks completely real or cel-shaded at any time, but it blends them in a way that always has the world look different. Characters have a great Valkyria Chronicles feel to them while most of the environment goes along the realistic spectrum. There are a few spots that don’t look to great (mostly the hand drawn looking rocks) and there is a lot of texture popping when you load a new area, but once everything is there it all looks great. There is also an appropriately wastelandish soundtrack to go along with the world. The music is fitting and will change while in battle to more appropriate battle music. The music though serves more as ambient sound than a mood setter. 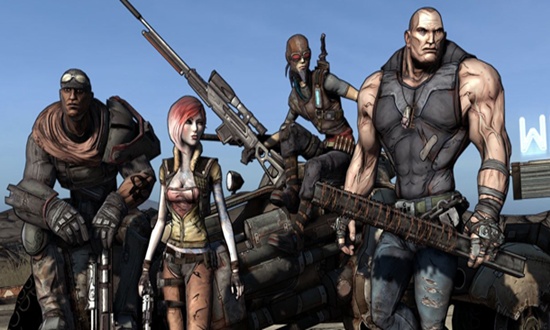 From left to right, Roland as the Soldier, Lilith as the Siren, Mordecai as the Hunter, and Brick as himeslf.

Unfortunately to world feels very restricting. It is an open world divided into different sections separated by doorways. The individual sections are of decent size but all feel too contained. The initial area for example had a border that shows a great deal of land in the distance, but any attempt to reach it is thwarted by mounted laser turrets. Most areas are also very linear. There may be multiple paths but they all lead to the same place.

The gameplay is solid and is better compared to Fallout 3, yet another strong comparison for Borderlands. The game has a very Fallout 3 feel to it but it feels like a much more capable shooter. The guns all shoot well and live up to their various stats. Enemies aren’t varied but the A.I. does a decent job of responding to various environments and fighting accordingly to keep the game challenging. Human enemies are the smartest using cover most of the time and attacking together while animals all blindly charge you. Now while Humans are the smartest, they do make some dumb mistakes. In one instance a Psycho choose to run into the wall below the staircase where I was standing instead of walking up and attacking me. He then ran from the wall, saw me again, and ran past the stairs once more into the wall instead of attacking. While funny it showed that the A.I. had some issues. The only issue with the combat itself is the damage system. There is nothing wrong with the actual system but how it affects certain weapons. For example, rocket launchers seem very underpowered. It is easier in most cases to get a one hit kill with a shotgun than a rocket launcher. Also the game doesn’t have headshots, it has critical hits. That means that all you snipers out there will find enemies that can take three or more headshots without going down. The damage system will cause most to gravitate toward machine guns and shotguns rather than the seemingly underpowered rockets and snipers, a strange move considering two of the classes focus on these two weapon types.

The only other flaw with the gameplay is the frame-rate which can’t keep up with the action. Most of the time the frame-rate will drop when there is a lot of action going on, but then there are times where it drops while fighting only one enemy. It will even drop while driving around sometimes. It is overall unstable and it can really ruin battles when you can’t move while surrounded by enemies.

Now if the A.I. does manage to down you or if the frame-rate did you in, fret not you aren’t dead right away. Now you get a deplenishing meter and one last chance to kill an enemy. If you do kill someone you get a second wind and receive full shields and a small amount of health, If however you fail to kill an enemy you will return to the nearest New-U-Station and live life anew, oh and they take some of your money. The amount is based on how much you have so the more you have the more you lose. 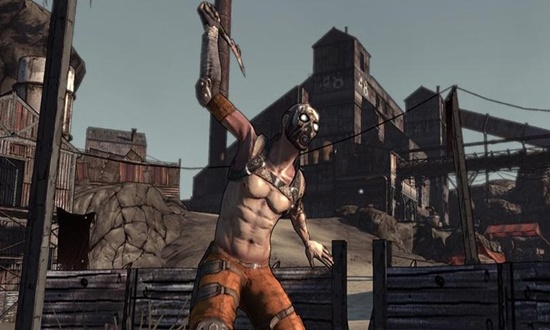 “Strip the flesh and salt the wounds! Ahahahahaha!” Psycho

Co-op is really fun and offers a more challenging experience. You can have up to three other people join your game. The game will scale the difficulty to match the number of players and the average level of the party, but it isn’t perfect so having the level of your party as even as possible makes things easier. Playing co-op adds a few new tactical aspects as far as planning your attacks and where you will attack. It also allows you to use the strengths of the individual classes to the advantage of the team.

There are times where you will use a vehicle and for the most part they handle well. Driving is very similar to Halo where you drive with the left stick and turn with the right stick; however the vehicles in Borderlands seem to easily get caught on objects and come to a complete stop. Your vehicle can come equipped with either a machine gun or rocket launcher and can be painted in one of eight fabulous colors like sky blue and pink though everyone will probably pick the rocket launcher and pink…ok maybe not the rocket launcher. The biggest advantage of the vehicles is the ability to transport to them. If you die and had a vehicle in the area you can simply teleport to it instead of walking or driving all the way back.

The game’s biggest claim to fame is, as Gearbox puts it, its “80 bazillion guns”. There are a lot of guns, but they only vary in stats, not looks. There are only a few visual variations of guns which then are given different colors. The different stats like damage, accuracy, and rate of fire, and any status damage or lack thereof are what define the guns in a class.

Now Borderlands has been compared to many games in this review for its similarities. To be compared to games like Diablo, Fallout 3, and Halo says good things for Borderlands, however there is one thing that those games have that Borderlands doesn’t, a good story. Borderlands story gets worse as it goes, at some points seemingly forgetting about it. Very early on you are told that the vault exists, taking away the mystery behind it. The discovery of that fact could have been a bigger part of the story and might have made things better, but instead you just progress in a boring straight line with no surprises or twists along the way. To make things worse the climax, if it can be called that, is very disappointing only outdone by the lackluster ending. The various non story quests and the early story quests will be what keep you entertained throughout the game. Borderlands is about the journey, not the destination.

All in all Borderlands can over come its short comings and is more fun than most other games you will play this year. It is a must by for those looking for a great co-op game and for those who love to shoot stuff, get loot and levels. If you’re on the border about Borderlands just go for it. What the game has to offer is worth your money, which is more than most games can say.

Final Verdict:
SUPERB
Borderlands is a Role Playing Shooter that despite its faults is fun and will keep you addicted long after it has ended.
A copy of this game was provided by Developer/Publisher/Distributor/PR Agency for review purposes. Click here to know more about our Reviews Policy.