Bound by Flame Interview: Beyond Good And Evil In A New Fantasy World

Producer Walid Miled talks about the hack and slash RPG's story, gameplay and much more.

Role playing games have for several decades focused on you, the hero, saving the world. Conflict arises, psychology is employed and there may be the odd twist here and there but for the most part, most developers have stuck to this formula. Spiders, which developed Mars War Logs, is looking to take a slightly different route with Bound by Flame, it’s fantasy RPG set to release on May 9th for Xbox 360, PS3, PS4 and PC. There is a demon in the game that’s eventually sealed in the hero but far be it from this entity to encourage hellfire, brimstone and some good ol’ fashioned maiming. It actually wants to save the world but comes into conflict with the hero’s desire to save its people. Who is right? Who is wrong? More importantly, who’s approach will you side with?

Game producer Walid Miled spoke to GamingBolt about the same and broke down the various mechanics you’ll encounter in the game including the fighting styles, enemies, environments, story setting and of course, development on a higher grade console with the PlayStation 4. 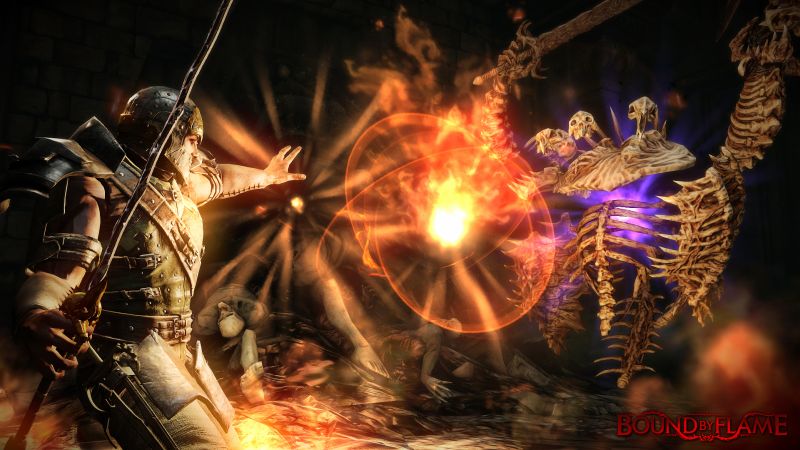 "The demon is neither good nor evil; he has his own goals and he doesn’t care much about humanity. All he wants is save the world and life as a whole. "

Pramath Parijat: Bound by Flame is the next action RPG from Spiders, after Mars War Logs. What was the motivation for attempting the same genre?

Walid Miled: Spiders was founded by hardcore RPG fans and with the idea that RPG will, at least for a while, be our main genre. As we strive with each game to give the player a better experience and a deeper story, we gain experience and our tool chains and pipeline improves, it is a continuously renewed experience for us that we would like to push to the maximum.

Pramath Parijat: With storytelling being one of the core elements of role playing games, what can you tell us about it? Furthermore, how do you plan to make sure it communicates directly with the player and get him/her intrigued?

Walid Miled: At spiders we also feel that storytelling is the core element of an immersive and complete experience. When working on Bound by Flame, we focused on these elements to ensure the interest and involvement of the player:

– A coherent storyline with unexpected developments and regular apparition of new elements.
– Strong characters that the hero and the player will look up to such as fellow mercenaries or the captain of the company.
– Strong companion characters that the player will get attached to and relate to. The player is also rewarded for successful interactions with companions through romances.
– Most of all; a choice based storyline and dialogs that involve the player, empower him with control and rewards him with the consequences of his choices.

Pramath Parijat: The game will see the player embody a protagonist who can either gain heroic powers or succumb to a flame demon for evil powers. Will there be a choice system akin to Mass Effect and Mars War Logs that ties into this and affects how you interact with different NPCs?

Walid Miled: Early in the game, the player is possessed by a powerful fire demon. This demon becomes a new character in the story. The demon is neither good nor evil; he has his own goals and he doesn’t care much about humanity. All he wants is save the world and life as a whole. On the other hand, the hero wants to save as many people as he can. So, the player gets these choices throughout the game through quests and dialogs where he decides if he wants to keep his humanity or give way to the demon’s influence.

Giving way to the demon will alter the available quests. It will also change your relationship to you companions as well as the endings. Gameplay wise, it also changes the characters appearance and the gameplay.

Pramath Parijat: What can you tell us about the five different characters that the player will pay a visit in the game? How will the choices in their respective story line affect gameplay and narration?

Walid Miled: I believe you are referring to the companions that the player will meet throughout the game. Actually, all 5 companions cannot be available at the same time; it depends on the choices and the quests you do; some will leave, some will die, some only appear later in the game. The available quests and story line are then affected by the whereabouts of these companions.
Learning from our experiences of Mars War logs we also focused on giving the companions specific gameplay abilities; healing, mind control, sniping, etc. Orders can be issued to companions so that they have a real tactical impact in the fights thus, depending on his speciality; the player has the choice to select a complementary companion. 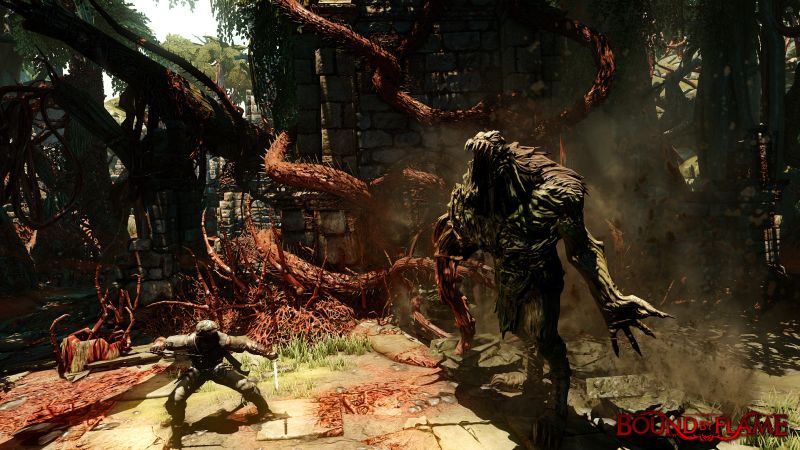 "We felt that for a renewed experience, variety in the enemies was a must have. We really tried to provide the player with different and evolving fight situations. Each enemy has its own specificity for the player to understand and beat..."

Pramath Parijat: What can you tell us about the different classes in the game and how will they differ from each other?

Walid Miled: The game doesn’t exactly have classes, it has different fighting styles. When starting the game, you do not pick between classes, you do that throughout the game by improving skill trees.

There are 2 fighting styles:

– The 2 handed heavy weapons fighting style, “Warrior”, uses swords, hammers and axes. This fighting style can be compared to a tanked class. It has interrupt abilities, can do area damages and can break light shields. With this style you can push enemies to the ground and perform a charged area attack.
– The double daggers fighting style, “Ranger”. This is a high speed, high DPS style made especially for hit and run and stealth. When stealthy you can backstab enemies for increased damages. We made sure that almost all of the fighting situations offer a stealth opportunity.
The player also has access to magical fire powers that can be used in both fighting styles.

Pramath Parijat: Can you please let us know whether there will be any skills or levelling up system in the game? If yes can you please explain these features in detail?

Walid Miled: With each kill and quest resolution, the player gains experience points allowing him to level up to around level 25 by the end of the game. With each level, the player acquires 2 “skills” points and 1 “feat” point he can use to improve his character. The game offers 3 skill trees. Each skill tree is associated with a fighting style:

Feat points can be used to unlock feats. Feats give the player an added advantage in the fight, for instance one feat called “Practical” gives the player 10% plus experience per kill. Feats have prerequisites that have to be completed before they can be bought. “Practical” requires the player to kill 15 enemies and costs 1 feat point. With all this elements the player can really fine-tune his character to his preferred playing style.

Pramath Parijat: What can you tell us about the enemies and the boss battles in the game?

Walid Miled: We felt that for a renewed experience, variety in the enemies was a must have. We really tried to provide the player with different and evolving fight situations. Each enemy has its own specificity for the player to understand and beat; some enemies are resistant to magic damages, other to physical damages, some event change stat in between. With each environment, new enemies will appear and different ones will be encountered at night.

We were very excited to work on a dark fantasy game as we could go crazy on the enemies and that’s exactly what we did, especially with boss that we wanted huge and scary; throughout the game, the player will stumble on some very nasty beasts. 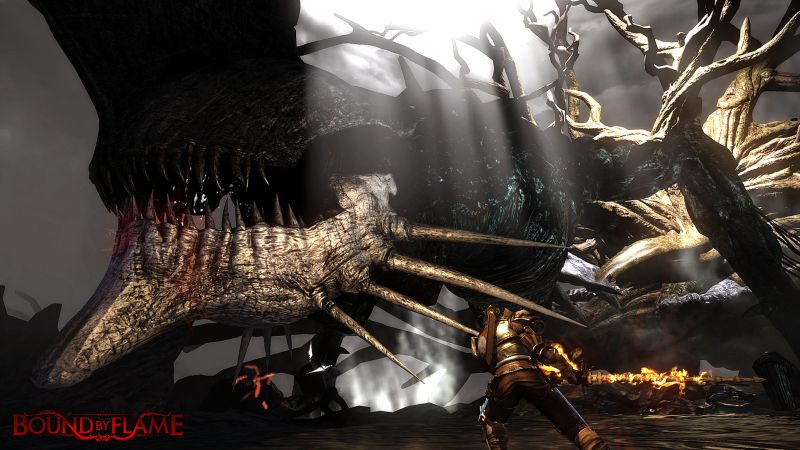 " We feel that the step up from the old generation is so strong that yes the PS4 has what it takes to really let the creativity run free. I am eager to see what the games will look like when the console will be pushed to its limits."

Pramath Parijat: How will Bound by Flame take advantage of the PlayStation 4’s hardware, especially given the potential that the platform holds? What are your thoughts on the power of the RAM and the unified architecture?

Walid Miled: The PlayStation 4 is a great console it gives us a blast of fresh air and much more room to express ourselves. The game will run in native 1080p at a 30-60 framerate and all textures, shadows and post-processes are high resolution. We also use the Dualshock 4 touch pad for short cuts and the light bar for life feedback. A unified architecture makes things easier and gives us more time to focus on giving the player a great experience.

Pramath Parijat: Does the x86-based hardware of the PlayStation 4 make it easier to develop for the PS4 in comparison to the PS3? For that matter, how similar will the PC and PS4 versions match?

Walid Miled: Unfortunately I cannot go that much into details as the answers would require addressing many points that reach out of the scope of this interview.

Pramath Parijat: Will Bound by Flame aim for a 1080p resolution and 60 fps on the PS4?

Walid Miled: Bound by flame runs on PS4 at a native 1080p with a frame rate ranging from 30 to 60 fps depending on how crowded the screen is with enemies.

Pramath Parijat: From a development perspective what are your thoughts on the PlayStation 4’s GPU? Do you think it provides enough number of compute units [it provides 18] to render high end visuals without any compromise?

Walid Miled: We feel that the step up from the old generation is so strong that yes the PS4 has what it takes to really let the creativity run free. I am eager to see what the games will look like when the console will be pushed to its limits.

Pramath Parijat: Is there anything else you want to tell our readers about the game?

Walid Miled: We put a lot of love and energy in making Bound by flame. Spiders is a team of 30 and many RPG fans. We really hope the readers of Gamingbolt will enjoy the game as much as we enjoyed doing it. Thank you !