Brutal Legend is all about the metal. Eddie Riggs is a roadie for a new age metal band. He feels as though he should have been born in a different time, a time where the metal was “real”, somewhere as far back as the early 70’s. After a freak stage accident Eddie is killed. Some of his blood enters his belt buckle which then summons a demon which leads him to a new world. This new world, from the environments to its characters, is built around the concept of metal. Think of all the crazy album covers for the biggest metal bands and you have an idea of what this world looks like.

Brutal Legend’s world and characters are its greatest success and asset. Monuments of classic metal symbols litter the open world’s landscape. There is also hundreds of other collectibles in the world waiting to be found. The world is decently sized, but being that Riggs is not a particularly fast runner you are given the Deuce (a.k.a. The Druid Plow). The Deuce is a hot rod that will quickly get you from point A to point B. Later in the game it can be upgraded to have increased performance, weapons, and armor in the Metal Forge. Once you have The Deuce you can access the Metal Forge through tunnels you unlock in the world. The characters are voiced extremely well. Jack Black delivers the Eddie Riggs performance very naturally, which is a credit to the designers for making a character that so screams Jack Black. There are also characters based on and voiced by famous metal heads, such as Ozzy Osborne as the Guardian of Metal. Needless to say they are also voiced to perfection. 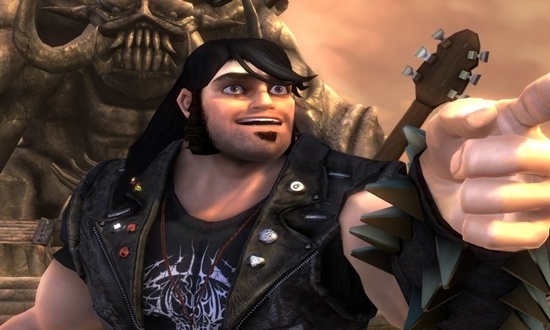 The story leaves a bit to be desired unfortunately. Having such an interesting premise, the game falls into many clichés about a third of the way through. The initial story revolves around an uprising to overthrow the tyrannical Emperor Doviculus (also excellently voiced by Tim Curry) called Ironheade. It relies heavily on humor and exploration to drive the initial portions, which isn’t a bad thing. Your starting quests will bring you all around the major portion of the map allowing you to see all of the landmarks and find many of the collectibles. The writers frequently set up Jack Black for his classic humor and it does well to keep things funny and interesting for the first two to three hours. However after that time the game all but abandons the story and simply has you hopping from location to location making the open world feel very linear. The last three or so hours don’t have much to offer other than the main missions and a boring section of the map that abandons what made the first section of the game so great. The game only returns to the story in the last two battles in an attempt to tie everything together, but with the story being as predictable as it is you would have figured out the ending long before that. The ending therefore is very anticlimactic and is a bit of a let down considering the promise it had in the earlier areas.

Worse yet the story is short. Taking your time you can finish the game in around six hours. If you want to try extending this time you can attempt the games side missions. They usually involved one of three objectives, ambush the enemy, defend this location, or the occasional driving mission. None of them are very entertaining and serve no purpose other than to gain points to spend in the Metal Forge on upgrades.

One of the game’s more mainstream features is the ability to do solos. You find solos by discovering relics in the world. They do everything from summoning The Deuce to melting of the faces of your enemies. The reason I say they are mainstream is because they are executed through a Guitar Hero style button sequence. A line of notes will appear over Eddie’s head and you must push the correct button as the bar reaches it to play the note. 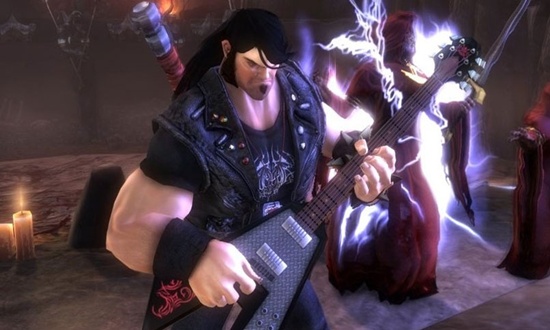 “In my world this guitar makes noises, here it blows stuff up!”

These solos are the one aspect of the combat that doesn’t feel generic. In combat you either fight close range with your axe or long range with your guitar. There are combos you can do, but every enemy seems susceptible to simple hack and slash methods. The solos help to break up the monotony and allow you to do a great deal of damage quickly. However then enemies in the game are boring for the first half of the game because they are simply copies of the allies you have in battle. It isn’t until the second half of the game that the cooler enemies will arrive. Later in the game you will also rely heavily on the games RTS portion during combat. During large set piece battles called Stage Battles you use fans as a resource to build an army of units that are used to defeat your enemies. They aren’t terribly difficult as long as you always have units on the field. By the end of the game Stage Battles are primarily boring as you can simply summon a dozen or so powerful units and win the battle.

The multiplayer is based entirely around the Stage Battle concept so if you didn’t like it in the single player you probably won’t like it now. The major differences is that now you can select one of the three main factions to play as which are Ironheade, The Tainted Coil, or the Drowning Doom. The ability to play with and against other players does make it a bit more fun and challenging, but still it will come down to massing your most powerful units and hoping the enemy can’t counter it.

Brutal Legend came with a lot of promise. While it excels at atmosphere it never excels at anything else, it’s simply good not great. It is good enough that it is worth playing, but it’s not a great game and therefore probably won’t have you coming back much after a play through and a few multiplayer matches. Hopefully if (likely when) given another shot at Brutal Legend these issues can be fixed and we will have a great game, until then we have to settle.

The game doesn’t excel at anything but the metal feel, cliché story, abandons story after the first major boss, side missions are boring and repetitive, if you don’t like metal you may not like the game.

Final Verdict:
GOOD
Brutal Legend excels at being about the Metal, but doesn’t excel at anything else.
A copy of this game was provided by Developer/Publisher/Distributor/PR Agency for review purposes. Click here to know more about our Reviews Policy.