Bulletstorm Review Round Up 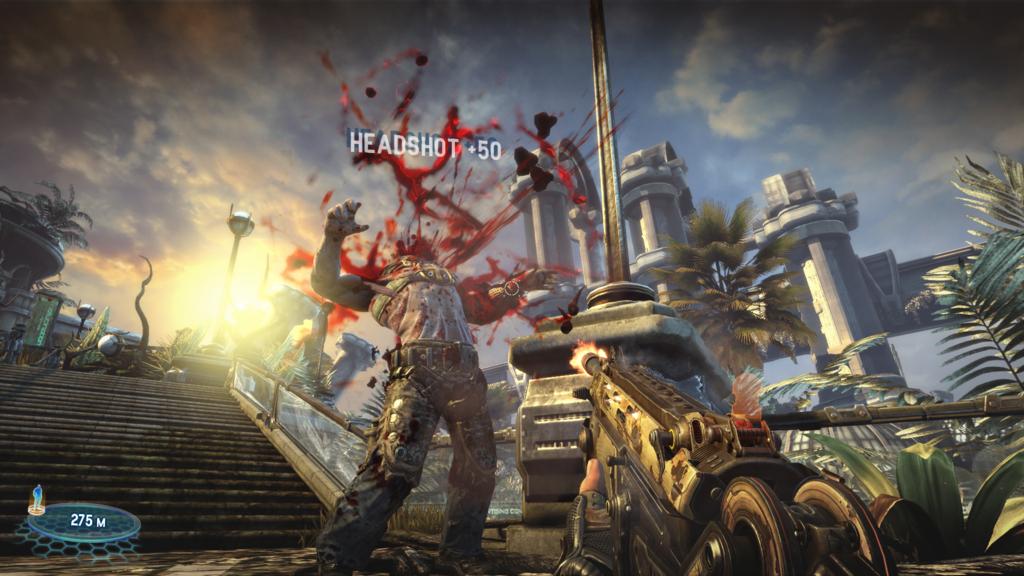 The embargo on Epic's highly awaited Bulletstorm has lifted, and the game is now out. Is it worth getting?

Bulletstorm, developed by Epic Games and People Can Fly in collaboration and published by EA, is now out in stores. And with the embargo lifting, the reviews for the game have started to come in. But the question is, is Bulletstorm all it is being made out to be? Is it the crass, fun, over-the-top shooter that we were looking for, or is it just another disappointing FPS? Well, we have gathered some of the reviews on the Internet below, for you to get the idea how the industry is liking them. Enjoy our review round up!

“Forget your preconceptions of Bulletstorm as a foul-mouthed big dumb action game. It’s an intelligent, nuanced design with fathoms of depth, which marks a return to the importance of player creativity in shooters and simultaneously evolves the concept of interactivity in an FPS world. And with two cleverly complimentary secondary modes, it will have serious legs for a good long while to come.”

“An incredibly welcome breath of fresh air. Never underestimate the simple need to let loose and cause some mayhem, and the skill shot system is exceptionally done.”

“An exceptional shooter brimming with personality and originality, but the concept is spread too thin in the later levels. New homicidal toys are constantly introduced in the first three-quarters of the game, which makes the final few hours a little stale. Mix in a ho-hum ending and the stellar experience goes out on a bit of a low note.”

“Yes, its vulgar and obscene nature might rub some people the wrong way, but for many Bulletstorm will be a humorous, tongue-in-cheek romp that distinguishes itself from the other samey sci-fi or military shooters clogging up the genre. The game brings simple design concepts used in the infancy of the FPS to the modern day and garnishes it with all the current-generation trimmings.”

“Bulletstorm wasn’t so much developed as it was raised on human growth hormones and taught the English language by a group of sailors and truck drivers. It was also shown every ’80s action and sci-fi movie ever made about a dozen times, given a bottle of whiskey, handed a gun and instructed to shoot anything that moves.”

“Behind the f-bombs and dick-tits are some incredibly mature and well thought out mechanics. Not only does the Skillshot system invite a completely new approach to shooting in single-player, it uses scores and leaderboards to inspire competition in a completely different vein to the amalgamate of contemporary shooters.”

“Truly a strange bird in the world of shooters. It doesn’t offer the rich backstory and characters of a game like BioShock, but damned if I didn’t laugh countless times during the many outbursts of colorful language from its cast. Like its innovative predecessors, Bulletstorm goes against the grain of the popular norm, often in exciting and hilarious ways, and though it’s not perfect, it’s still one hell of a ride.”

“Epic and People Can Fly not only succeed at delivering the “bigger” and the “more,” but bring with it a gameplay slant that makes it a one-of-a-kind experience. Yes, it may be brazenly outrageously and juvenile; be prepared to check your “Serious Business Adult” card at the door. But lurking underneath is a seriously fun, novel take on the first-person shooter genre that shouldn’t be ignored. Just make sure you don’t “play it wrong.””

“It’s a lot of fun and fast as hell, at least in the first half. The pace sometimes slows down as you get to the end, and the Skillshot system dowsn’t work smoothly all the way through. It’s still an original and funny take on first person shooting: it won’t last too long, but you’ll enjoy a lot out of it.”

“If you can make peace with the ridiculous vibe, it’s almost a sure thing you’ll have fun with it. It doesn’t have the legs to sustain it for months, so you might want to approach the game as one of its characters would approach a leather-clad Mad Max reject: wham, bam, thank you, ma’am.”

“Kill with Skill is a perfect slogan for an action game with so many ways of executing enemies. Filled with a great sense of humour, the main campaign is the star in this game. It was designed in a way that we always find new things to do, completing the incredibly large list of skills with a good variety of weapons and situations. You really have to think before you act, planning how you’re going to attack in order to get greatest amount points that is possible, taking into account not only the enemies, but the environment. But when you finish the game… you have two options: you’re really competitive and want to be the first one in the charts, or you just abandon the game because of its lack of cooperative mode or an interesting multiplayer. Regardless, but you should not miss such a unique campaign.”

“Bulletstorm is frantic and wild. Its gruesome story mode comes with the Online Co-Op (anarchy). It may be not as polished as other first-person shooters, but for sure it is original and thrilling.”

“Bulletstorm is a solid shooter that turns back the dial about 15 years – to a time when ultraviolence, arcadey gameplay and outrageous scenarios were the staples of a shooter. But it still manages to feel fresh and on par with the higher quality shooters we’ve seen emerge since 1995, and kicks it up with a brilliant scoring system that keeps the gameplay varied.”

“Bulletstorm is every action fan’s wet dream. It has excellent playability, grand visuals and many hours of entertainment. The story is a bit average, and the violence and gore may be a little too much at times, but the game makes up for it with great gameplay, and the skillshot system will keep us coming back to perfect our scores.”

“Bulletstorm is not art by any metric. It’s difficult to defend, like a friend you take to a party who ends up pissing in a vase. You don’t want to be associated with him, but sh.t, he provides an evening of excitement. It’s a game that’s very proud of the f-words it’s learnt, and it uses them a lot. Fast. Frantic. Fatuous. Full-on. And yes, that other one: fun.”

“Unspectacular online play, an abundance of shooter cliches, and forced vulgarity keep it from joining the shooter elite. But the creativity of the skillshot system paired with the engrossing nature of moving up the Echoes leaderboards gives Bulletstorm some muscle and will inspire a dedicated following of talented players eager to show off their incredible mastery of its gratifying mechanics.”

“Bulletstorm kerb-stomps the dominant FPS orthodoxy, replacing tired old conventions with fresh new mechanics. Its gorgeous sci-fi aesthetic and fluid ultraviolent action make the game almost as fun to watch as it is to play and, although it lacks adversarial deathmatches, Bulletstorm’s Echoes and Anarchy modes significantly extend its appeal.”

“It’s not going to change the world, but at least it manages to change first person shooters back into something more irreverent and fun.”

“Does Bulletstorm revolutionize the FPS? Clearly not! Nevertheless, it adds a personal touch to the genre by making a real scroring game like in the old times. All of this in an adventure which is not perfect, but refreshing and fun at once… and the game system is really excellent. Frankly, if you like the genre, do not hesitate to make yourself happy!”

“Bulletstorm is the evolutionary “next step” for first-person shooters that makes up for its jerk-off story by adding plenty of new wrinkles to a heretofore tired genre. This is a game that will be remembered for years to come (for a few reasons).”

“In the end, that’s what’ll keep you playing, trying to discover the hidden death-dealing methods, like throwing a group of enemies up into the air and using the flare gun to set them all on fire. That’s a freebie, use the knowledge wisely.”

“The way Bulletstorm fits together results in something cool and memorable. Multiplayer failings notwithstanding, Bulletstorm shines as a single-player shooter. Despite its crass humor and wang-flinging bravado, it’s got some real character and heart to it.”

“Sadly, Bulletstorm’s multiplayer features make it a mixed bag, but there is a solid and enjoyable single-player campaign mode in there. The only question is whether that’s enough to justify a purchase over a rental.”

“Sure, the game is hilarious and “laugh out loud” funny, but not everyone is going to find the dick and fart jokes worth their $60. If the developers can ensure the future of the franchise is free of bugs, and work in a competitive multiplayer mode, we might be onto something outstanding. As it is now, Bulletstorm is a very good start to a series on the cusp of greatness, yet hindered by some seriously problematic technical issues.”

“Bulletstorm is the world’s longest dick joke… Despite the fact that it boots you out to loading screens every time you finish a segment or die, it’s a polished-enough piece of work. The point system incentivizes you to play the game using all the tools at your disposal… It’s just a shame the developers couldn’t stop thinking about reproductive anatomy.”

“A game unsure of what it wants to achieve. When it lets itself, it’s a fantastic adrenaline rush through well-constructed set-pieces and gloriously fun-to-watch violence. But it too often drags itself down with overly structured situations and restrictive, strategy-heavy gameplay.”

There will be more of these reviews up soon, and we may even have missed out on many, so keep posting the links in your comments below as you see them!

Also, stay tuned to GB, we will have our own review, along with a video review, up very soon!