Burn Zombie Burn! Just saying the name of it tells you that this game is nothing but a game that is wacky, funny, and fun at the same time, well that is exactly what Burn Zombie Burn! is. The game puts you in the shoes of Bruce, not too much can be told about Bruce, he only talks once before a game begins, and there is no information or story told about Bruce, but once you are in his shoes, you know your goal, there are zombies coming at you, kill them!

Zombies come in many types, theres your regular zombies, but then things get a little messy, you have suicide bombing zombies, dancer zombies (that’s right!) and many more, as you progress through the game you will see for yourself.

So Burn Zombie Burn! is basically a shooter/brawler where you have to kill every single zombie coming your way, weather its with a Handgun, an Uzi, or even a Lawnmower, you choose the way you want to kill them, as your current game progresses, new weapons will appear, though you can only carry one primary weapon at a time, switching between weapons is no problem since new weapons appear constantly. 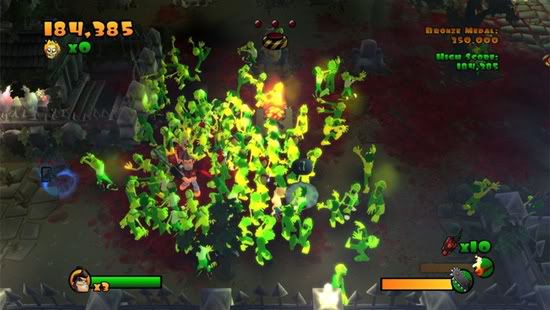 Though the game is just your causal zombie brawler/shooter, the game has a twist to the gameplay, as you may notice from the name of the game “Burn Zombie Burn!”, you have a secondary weapon which is a Fire Torch, zombies are afraid of fire, so if you take out your torch they wont come near you..but if you burn them they will start chasing you constantly and they will become stronger and faster so be careful, but the good thing about burning zombies is that you get extra points, for example if you burned 50 zombies, you will have a x50 on the top, but if you kill a zombie that is on fire, your extra points will go down, meaning if you burned 50, and you killed one burned zombie, you will have an x49, get the idea?

There are 2 single player game types in the game:

Arcade Mode – In which you play the game as it is, but earning medals (bronze, silver, gold, developer) will unlock new maps, so if you earn a bronze medal on your current map, the next map will be unlocked, and so will Trophies as you earn medals and progress through the game.

Challange Mode – Where you have specific challanges that you need to do, so there is a change in the normal game you play, such as the challange “My exploding Zombie Head!” where you have to kick around a zombie head which will explode while you shoot it, and at the same time you have to kill zombies using this head to unlock the bronze medal, which will unlock the next challange.

There is also Tutorials which I highly recommend you do before you start a game, Burn Zombie Burn! is a very complicated and hard game, you need to learn the rules and how to play, without the Tutorials I found myself dying over and over again cause I just shot the zombies without knowing what else I could do. 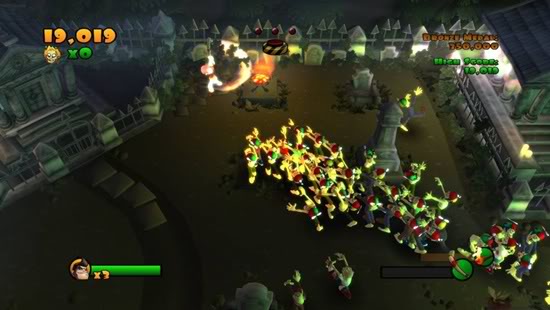 The addition of Co-Op and Versus modes add alot of fun and replay value, so you should definatly check them out.

It would have been nice with the additon of online Co-Op or Versus, but no biggie.

So in conclusing Burn Zombie Burn! is a good game, and you should definatly buy it, for only 10 bucks it’s worth it.

Very Addicting and fun . Variety of weapons and zombies . Co-Op/Versus is a great addition.

Final Verdict:
GOOD
Burn Zombie Burn! is one of the most addicting PSN games ever, and the option for Co-Op makes it even better.
A copy of this game was provided by Developer/Publisher/Distributor/PR Agency for review purposes. Click here to know more about our Reviews Policy.