A guide for Call of Duty: Infinite Warfare’s Retribution DLC. 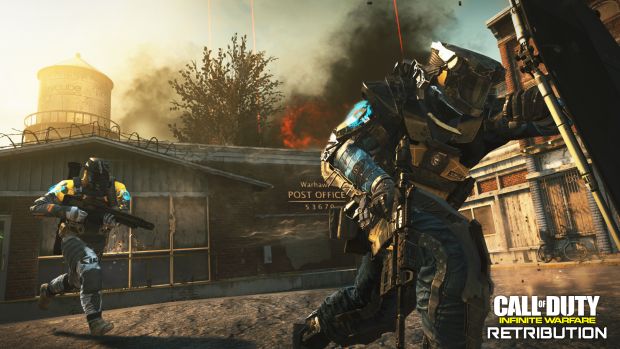 The newest DLC pack for Call of Duty: Infinite Warfare is out now. You know what to expect from it- it adds some more multiplayer maps, and it expands and continues upon the story of the game’s Zombies mode.

You don’t need my help with the multiplayer maps- realistically, the reason these expansions are as popular as they are is because of the Zombies mode. Everyone knows that- okay, that’s a lie, I’m sure lots of people actually care about the multiplayer maps too. Still, Zombies is what most need help with- that’s what we are dealing with here. That, and the Trophies/Achievements.

Zombies Mode is actually fairly easy this time around- the entire process can be broken down into seven simple steps:

Turn on the power

For this drop through the hole i the ground to collect N31L’s head, and return to the main area and put it into the terminal

Go to the hallway next to the Bang Bangs perk machine, and find a metal grate that you can see a floppy behind- shoot it with the Entangler, which will cause it to drop off in a random location

Collect a White Helmet with the Entangler, and take it to the Cryptid autopsy room. You will find a blue force field in a corner. Throw the helmet through it at the monitor, disabling the force field, and collect your second floppy disc from there

For the third floppy disc, you need to collect three satellite parts:

The last floppy disc is to the left of the P-a-P portal, in the snow

Complete the 4X4 switch puzzle in the med-bay- remember, this is pure problem solving skill here. Reset the puzzle if you feel you have gone wrong at any step.

That’s it! We are done. Check out the video below for a full video walkthrough of the mode, if you want some actual visual aid to go with the steps:

Collectibles and their locations:

Additionally, for some of the smaller collectibles and easter eggs, we have some further videos for you to peruse:

Getting the Venom-X and Upgrading It

Cracking Skulls
In The Beast From Beyond, complete Skullbreaker.

Failed Maintenance
In The Beast From Beyond, kill zombies with every trap.

The End?
In The Beast From Beyond, collect the final piece of the Soul Key.

Broken Record
In The Beast From Beyond, unlock the hidden song.

Double Feature
In The Beast From Beyond, return to the theater.

Egg Slayer
In The Beast From Beyond, equip the Venom-X.

Encryption Decryption
In The Beast From Beyond, Pack-a-Punch the Venom-X twice.

Friends Forever
In The Beast From Beyond, fully restore N31L.

Message Sent
In The Beast From Beyond, send the Turnstile back to the past

Super Duper Combo
When playing Skullbreaker, build a combo of size 10 or larger