Infinite Warfare seems to be stuck in the shadow of its predecessor.

This year’s Call of Duty has changed the formula by opting for an outer-space setting along with Dead Space like zero gravity environments. Before playing the game, I was expecting a rather derivative single player experience. The space setting showcased in the game’s various pre-release marketing materials did not really excite me but after playing through the seven odd hour long campaign I was left pleasantly surprised with the game’s high octane action and cinematics.

The player takes on the role of Captain Nick Reyes, a newly appointed commander of the UNSA Warship Retribution as you and your crew take on a hostile faction known as the Settlement Defense Front. The game takes several cues from the likes of other sci-fi franchises like Mass Effect and Destiny. As you roam around your decorated warship, Retribution, you will be able to engage in conversations with your team mates, in a manner similar to Bioware’s finest sci-fi role playing game.

The game doesn’t feel shy to show off its gorgeous visuals, amazing space locales and some of the best motion capture in the industry. This results into intricately crafted cutscenes that give the game a cinematic feel to it. The experienced is further amped up by excellent voice acting by Brian Bloom, John Marshall Jones and Eric Ladin who take on the roles of Reyes, his mentor Admiral Raines and Private Kashima respectively.

"The campaign features the franchise’s signature “boots-in-the-ground” gameplay, however much of it takes place in outer space and this is where Jackal, your very own jet fighter comes into play."

As the commander of this warship you will be calling the shots and ensure that your crew is engaged in an all out warfare against the SDF. The campaign features the franchise’s signature “boots-in-the-ground” gameplay, however much of it takes place in outer space and this is where Jackal, your very own jet fighter comes into play. Taking control of Jackal is rather smooth and the movement limitations are quite free resulting into to a fluid air combat experience. Set amongst beautiful looking visuals, dogfighting is one of the best gameplay elements while you are controlling the Jackal. Given the lack of games that deliver a decent space combat experience, Infinite Warfare succeeds in implementing an exhilarating gameplay time during outer space set pieces. You can also customize the Jackal to your liking and then fly out in crazy missions as the crew salutes you.

As mentioned earlier, you will be traversing zero gravity locations and players are equipped with a boost pack, and a grappling hook that will help you to find your way around. These are subtle gameplay additions that have been added to adapt to the level design used in Infinite Warfare. Most of the missions in the campaign, as expected, end with jet battles in space and that too, without even a single loading screen in sight. Subtle additions like this help to up the ante in a fast paced shooter like Infinite Warfare.

However there is a sense of repetitiveness here which seems to be a trend in recent first person shooter games. You pick your mission, select the type of load-out you are interested in and head out for combat…after a while all of this gets a bit repetitive and breaks the game’s immersion factor. I understand the need for the load-out screens, but for a campaign that is not even going to last for 10 hours, the frequent load-out customization feels like an interruption to action.

"Speaking of which, the multiplayer experience of Infinite Warfare seems like a cloned version of what was present in Call of Duty Black Ops 3."

Infinite Warfare also features side missions which help to add a bit of variety to the campaign. These usually last around 20 minutes and focus on dogfighting sequences, breaching enemy vessels and a few other optional operations. They aren’t particularly groundbreaking but are intriguing enough to build on the game’s existing plotlines and campaign structure. Hopefully, future Call of Duty games can explore the side missions’ aspect more with a better narrative structure and gameplay variations.

After you are done with the campaign mode, Infinite Warfare has a zombies mode titled “Zombies in Spaceland” which is largely based on Treyarch’s established blueprint. The mode tells the story of four aspiring actors who have come upon a theatre for a audition. The story, as expected, is zany but the biggest change in this year’s iteration seems to be somewhat easier difficulty setting. You are frequently guided with tips and whatever  you have earned in the game’s multiplayer experience will carry over to the zombie’s mode making the experience feel much more forgiving than the series’ previous offerings.

Speaking of which, the multiplayer experience of Infinite Warfare seems like a cloned version of what was present in Call of Duty Black Ops 3. This may disappoint or appeal to players depending on which camp you belong to but overall we are looking at a largely similar experience as Black Ops 3. Character movements, boost jumps, wall running and more return in the game’s multiplayer offerings with the class system titled as Combat Rigs which is very similar to Specialist system found in Black Ops 3. The game offers six different types of Combat Rigs ranging from Warfighter to the Phantom, with each of them having specific skills which in turn are specific to the space setting. 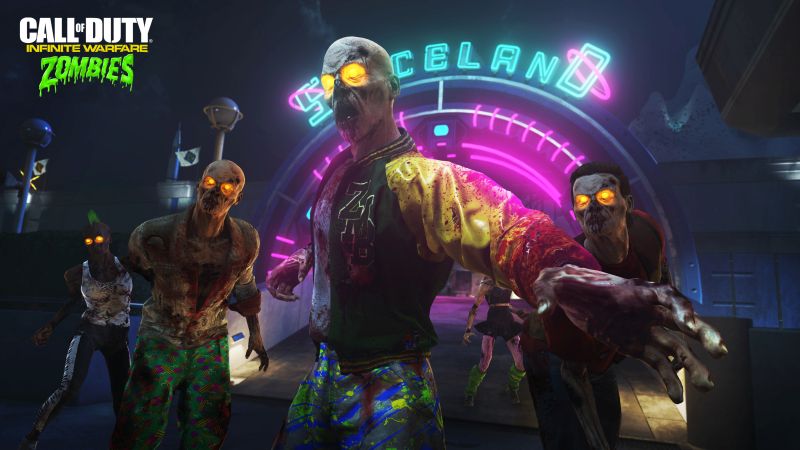 "For hardcore Call of Duty fans, picking up Infinite Warfare should be a no brainer. If you love Black Ops 3’s multiplayer system you will appreciate Infinite Warfare’s offerings."

However not everything has been merely ripped off from Black Ops 3. Missions Team is a new addition to the Call of Duty multiplayer experience which will encourage you to complete specific objectives and challenges based on your ability such as taking a set number of headshots. As you start completing objectives, your Mission Team will rank up resulting into rewards and unlockables. Unfortunately, the supply drop system still feels largely unbalanced as the game kind of encourages a play to win situation. Infinity Ward have tried to balance it out by including salvage but unlocking your favorite weapons may take a lot of time encouraging microtransactions.

Call of Duty Infinite Warfare features one of the best campaigns in recent years. The story is backed up by excellent writing, high end motion capture and brilliant voice acting. The zombies mode is colorful and provides a zany experience, and also drops its difficulty level by a bit to encourage new players to try it out, however the multiplayer experience is still largely the same.

For hardcore Call of Duty fans, picking up Infinite Warfare should be a no brainer. If you love Black Ops 3’s multiplayer system you will appreciate Infinite Warfare’s offerings. For everyone else who are on the fence about the game’s gun balancing issues, we’d suggest waiting and check whether Infinity Ward will address it and try and keep competition fair for those who will grind to unlock a specific weapon against those who opt to spend their money and unlocking them through microtransactions.

No real innovation in multiplayer due to which ends up feeling quite similar to Black Ops 3, campaign has a sense of repetitiveness to it, supply drop system is unbalanced.

Final Verdict:
GOOD
Infinite Warfare features a solid campaign but its lack of innovation in multiplayer hold it back from achieving greatness.
A copy of this game was purchased by author for review purposes. Click here to know more about our Reviews Policy.