Call of Juarez: Bound in Blood is a story of two brothers and their wild ways. Their lust for woman and gold. Call of Juarez is a great game and reminds us that yes first person shooter can too have great plots. The brothers Ray and Johnson also have a third brother: William. He is more pristine and pure. Having said all even though you will be playing as either Ray or Thomas, the story centers around William much more heavily. The game is all about a man named Juarez and how he lures the brothers in to thinking that there is a treasure hidden somewhere. That is not all, Ray and Thomson set their eyes on Juarez’s girl Marisa. Eventually as the story progresses the team is helped by an Indian who helps them get the medallion which will show the direction to where the treasure is hidden. The emotional involvement of brothers and how they go after the gold, forgetting their virtues in the way is really an epic drama that unfolds. The climax is really touching where William is shot by his own brother where they have a duel at each other. In the end after killing Barnsby’s the main antagonist of the game, Ray leaves this world, the gold and fulfills William’s wishes and becomes a priest himself. Thomson and Marisa get married and the story ends. Overall as I mentioned before this is the pinnacle of story telling in first person shooter games. 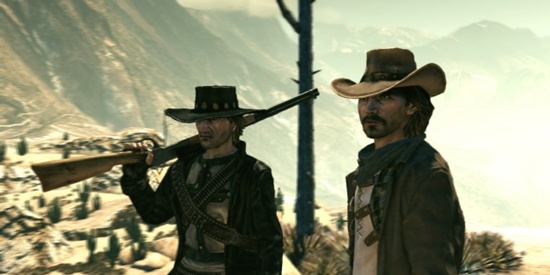 Ray and Thompson.. for Gold and Woman

Now the gameplay in Bound in Blood is similar to what we find in other first per shooters. You will have the option to play as Ray or Thomson with each of them having their own unique styles. Ray is more of the aggressive type, he is a revolver specialist and will take out enemies in some style. There is action you can do as Ray but with Thomson who is a rifle specialist is a much more fun alternative. With Thomson you will be able to pull up Ray up from higher areas, cling your rope so you can get to inaccessible areas. Also present in the game is the concentration mode where the screen darkens and everything slow downs. Its a good move by developers and is an ideal for situation where you are surrounded by enemies. Also there will be horse chase sequences, missions where you have to ride your horse and save Marisa and many more side missions like Wanted, Cattle Theft etc. Unfortunately some of the enemy AI is very bland and makes them very easy to take them out. Some boss battles are there but they are not boss battles in a real sense. There is also the classical western style dueling which gets old very fast. 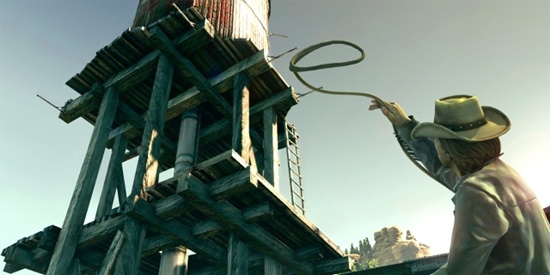 Thompson is the most fun to play with

The visuals of Bound in Blood are breathtaking. The old country style have been recreated quite wonderfully. Areas like the traditional ghost towns, Apache hideouts have been incarnated very nicely indeed. The Sound on the other hand is repetitive, When you hear it first you will like it but just like dueling it gets old very fast. Voice acting is superb and top notch. Ray, Thomson and other supporting cast voice overs have been handled professionally by the developers.

Call of Juarez is a great game- one that should be played by every first person shooter fan. Minor hindrances like bad AI and old school dueling doesn’t make this game bad and infact there are more good points about this game. Pick this one up if you like the emotional side of story telling in video games.

Beautiful representation of the old West. Voice Acting is top notch. Story is the best part of the game.

Final Verdict:
EDITOR’S CHOICE
Call of Juarez is the pinnacle of story telling in first person shooter games and one that you will remember for a long time to come.
A copy of this game was provided by Developer/Publisher/Distributor/PR Agency for review purposes. Click here to know more about our Reviews Policy.