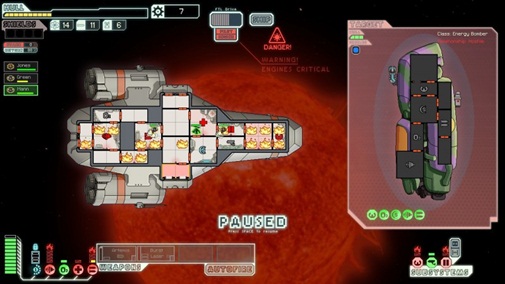 I’ve been playing a lot of Faster than Light, but I still suck at it. The rebels have completely destroyed my beloved Federation. I’ve fled on my ship, the Cowboy, named in honor of the 20 Century Dallas Cowboys football team. I’m with my wife, Lizzie, and a man named after our dog, Soda. This will be a long journey through space with the wife. Hopefully someone brought a pack of cards.

We’re trying to stay one step ahead of the rebel fleet as we upgrade our ship and destroy their flagship in Sector 8. As far as I know, my ship and my crew of three are all that’s left of the Federation. The war is essentially over, but we won’t give up. This is a story of uncontrollable fires, screaming in space, and dead loved ones.

This is FTL: Faster than Light.

On the very first jump we encountered a rebel fighter. 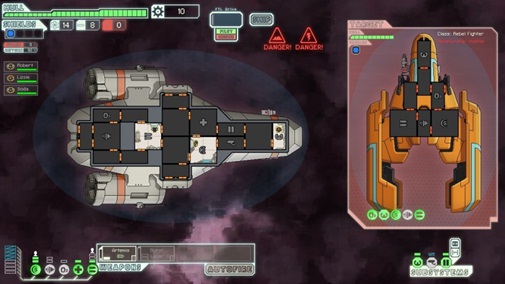 Everyone took their battle stations: Lizzie as pilot, me as gunner, and Soda on the shields. We were in a nebula, meaning our sensors didn’t work. We couldn’t even see the inside of our own ship. An electrical storm broke out as lightning bombarded our shields. We targeted and disabled the enemy’s weapon systems with our burst laser and won an easy victory. After a short battle we received a message from their captain: they surrendered and asked for mercy.

We did not grant it. 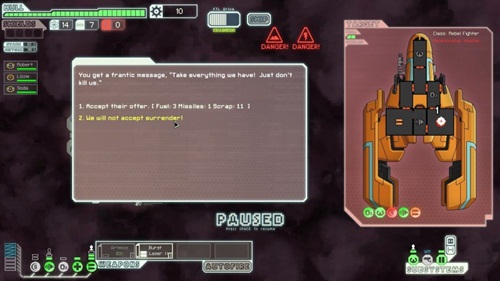 “No surrender! We’ll grind their bones to make our bread!” -my wife

We found a rebel space station housing military supplies and decided to attack. We defeated the defense drone and raided the station. Inside we found a new weapon called the hull beam. Beams sweep across the ship in a line hitting everything in their path. Hull beams do double the damage to the enemy ships when they hit rooms that aren’t attached to a system.

We’ve begun a highly effective battle tactic that involves shooting at the enemy weapon system with the laser, then following that with a barrage from the hull beam once the shields are down.

An alien has joined the crew. He’s an Engi. He’s weak in combat but has a knack for repairing systems (Engi, Engineer, get it?). We saved his crew from pirates and he asked to come with us. His name is Nathan and he’s been assigned to the engine room. Nathan seems like an odd name for an alien, but I’m sure he’ll prove his worth.

Nathan is dead. He never proved his worth. We found a man living alone in a cave on a barren planet. His mental state was questionable, but I thought we could make a spaceman out of him yet. I was wrong. The crazy man murdered Nathan  before the rest of us put him down.

A few jumps later we encountered another Engi named Zoltan, which is a much better alien name. I prefer him already. We saved him from pirates in an episode very reminiscent of what happened with Nathan. Eerie. In any case, I’m sure Zoltan will prove his worth better than Nathan did.

Stumbled upon an Ion Blast Mark II out in the middle of space. Ion weapons don’t do hull damage but they disable systems. The problem with this weapon is it’s a power hog, requiring three slots of energy to use. I’ll need to upgrade the weapon systems.

Our crew is coming together. A ship of slavers demanded we turn over one of our crew to be a slave. We refused and a fight ensued. After a fairly easy scuffle the slavers surrendered and offered one of their slaves as a peace offering. We accepted. Xemu is a Zoltan, a group of aliens that supply one power to any system they’re standing near. I put him in the engine room and moved Zerimar, our Engi. Zerimar’s new job will be to wait around for something to get blown up and then run over and repair it.

We’ve reached sector 6. It belongs to the mantis, a race of large bugs that excel in close combat. They prefer to board and eat their enemies alive.  They boarded the very back of the ship and started to eat their way to the engine room. Xemu fled immediately, leaving our engines unmanned and defenseless. 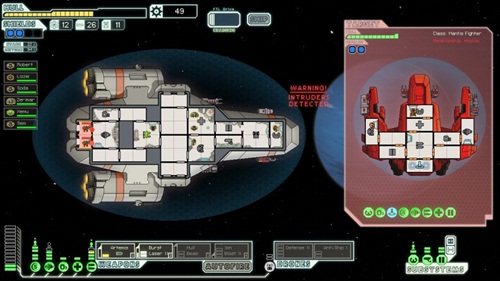 What sci fi story would be complete without the man eating but aliens?

The mantis broke into the room and started picking away at the engines, making dodging enemy missiles that much more difficult. If the stupid beasts hadn’t shot a missile into the engine room where their own soldiers were, they’d have done far more damage. In the end we defeated the enemy ship, but the hull is damaged and the engines had to be completely repaired. 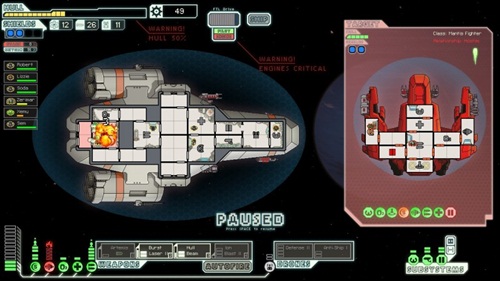 We limped into the next system right next to a star.  A Mantis Fighter attacked us as both ships burned from the burning star’s heat.

Solar flares lit up the ship as we combated the Mantis Fighter. The hull was in bad shape. Two mantis soldiers transported into the engine room and took it out right after it had been repaired. They stormed the next room and cut off life support to the entire ship. We were losing oxygen, and if it ran out we’d have no way of getting it back unless we somehow got by the mantis and repaired the life support.

A solar flair caused the shield system to burst into flames as the mantis broke into the weapons room and I retreated deeper into the ship. A missile slammed into the sensors and put a hole in the side of the hull, sucking oxygen out of the sensors room and forcing us to put it on lockdown. 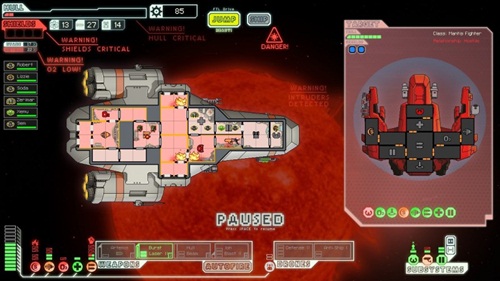 Life support was down. Engines were down. Shields were down. Weapons and sensors were failing. The ship was on fire and one more hit would end it all. I opened up the airlocks to vent out what little oxygen was left in order to suffocate the fires throughout the ship. In my panic I forgot to open the weapons room doors to suffocate the intruders, and they continued their rampage. Another solar flare was about to finish us off.

The engines were down and we couldn’t jump out of there without them. I sent Zerimar to sneak by the mantis and repair the engines just enough for us to make a jump. He nearly suffocated, but he succeeded and returned to the medical bay barely alive.

We jump away from the star into the great unknown. The mantis are still aboard and the hull is still extremely vulnerable. If we’re hit by anything harder than a light breeze at the next location, we’re all dead.