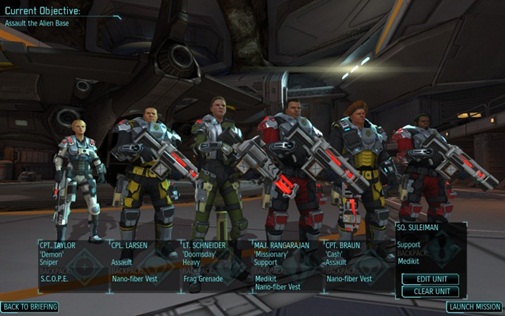 The inside of the alien base is… weird. And green. 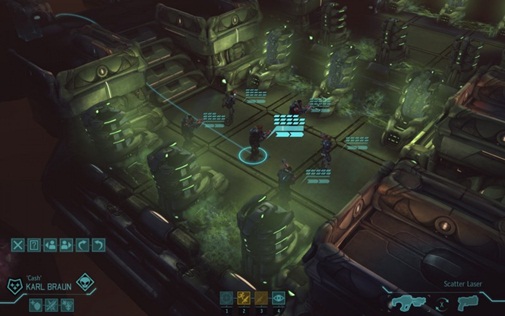 It’s quiet. Then it gets very, very loud.

We run into a large squad of mutons and very little cover. A huge firefight ensues as lasers and screaming fill the room. And just like that it’s quiet again. There’s a tink tink tink sound, the sound of metal on metal. A grenade bouncing on the floor near the XCOM soldiers. Everyone holds their breath and closes their eyes. A loud explosion and two XCOM soldiers are dead. One was a squaddie (low rank), so who cares. The other was a corporal.

Once again lasers and screams fill the room. All of the mutons are dead. We’ve lost 4 out of 6 soldiers. Not bad if we play the rest of this well. Everyone is wounded, but they pick their battered carcasses up and desperately continue through the base.

They find the base’s leader all alone. He appears to be a slightly larger version of the sectoids, the small aliens that are easy to beat up. My guys laugh at him and shoot him and laugh again. That was easy.

But the mission doesn’t end. We’d been ordered to clear the base of hostiles, so there must be aliens alive and well somewhere on the base. Fine, looks like we’ll have to backtrack to find them. How anticlimactic.

Embarrassed, we stumble through the dark corridors for a while, retracing our steps and looking down paths we’ve never been. It’s boring, and when I get bored, I get careless. I got careless.

I ran Taylor, the Aussie sniper, into a dark corridor by herself. Taylor finds herself surrounded by crysalids. People who play XCOM know that stumbling into a group of three crysalids at point blank range at the end of your turn is pretty much worst case scenario. Crysalids don’t have guns. They bite. When they bite, you turn into a zombie for a few turns. That’s not even the bad part. After a few turns a new crysalid eats its way out of the victim’s body and now you have to deal with that one too. That’s the bad part.

Taylor is surrounded and picked apart by the crysalids as everyone looks on in horror. The Australian zombie gets up and drags herself across the metal floor towards her former allies. Now there’s three crysalids, three XCOM soldiers, and one zombie. The bad guys outnumber us.

That makes three crysalids, two XCOM soldiers, and two zombies. We’ve got Braun, the assault man, and we have the last of the XCOM originals, Schneider. Both are from Germany. Germany quit the XCOM project months ago, and I”m sure these two are wishing they’d done the same.

They fall back and shoot. They kill two of the crysalids by some miracle, but it’s not good enough. A new, Australian crysalid jumps out of Taylor’s body. Braun and Schneider keep shooting, keep retreating, but they can’t keep this up forever.

They kill another crysalid, but a new crysalid eats out of the medic’s body.

Braun is ripped to pieces.

And what a spectacular failure it was! Ninth inning, two outs, two strikes, and XCOM throws a stinker across the plate. Now the whole team has been eaten by aliens (that’s where the baseball analogy kind of breaks down). Everybody died. I spend a moment picking my jaw off the floor. Everything had gone so well, and then it went so horribly wrong.

So I get a new team of fresh faced rookies who have no idea what they’re in for. They’re gonna have to learn quick. The new recruits are sent on their first mission before they have time to unpack their bags. Aliens in Argentina have been abducting people so XCOM is going in to take the aliens out. This is a must win situation. Several countries around the world are toying with the idea of pulling XCOM funding. Argentina is one of them. A solid victory here will go a long way in calming people’s fears so they continue to give this program money. A loss here would mean we have to spend more money to hire more rookies that are too inexperienced to get the job done anyway.

I send the rookies out and hope for the best. The stakes are high and expectations are low.

They perform brilliantly. Most of them are wounded and nearly killed, but not a single one of them dies. All six of them are promoted. We’ve gotten a little scrap of momentum as I begin to have faith that maybe hope for this planet isn’t lost after all.

There’s no room for mistakes.

Well, that’s when I make a mistake. And it’s a doozy!

When I was hiring new rookies, it didn’t occur to me that if a bunch of them got wounded, I’d need several extras to cover for them. I only have four soldiers available when a terror mission comes up. A terror mission is when the aliens attack a city. A CITY! As in I really, really, really need to be ready to defend and it’s a disaster that I only have four guys. The attack is in Canada, and Canada already has a problem with XCOM because we haven’t been protecting them much lately. Again, a loss here likely means they’ll pull funding. Another must win for the new recruits, but this one is going to be harder. Terror missions have civilians everywhere, and the aliens simply run around killing them. We have to find the civilians first and rescue as many as possible. We get to Canada and here’s what we see. 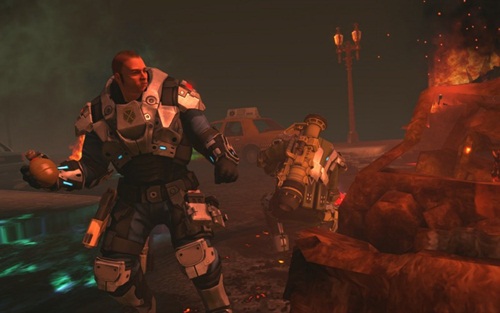 There’s no problem a grenade can’t fix… Except maybe a world shortage of grenades. 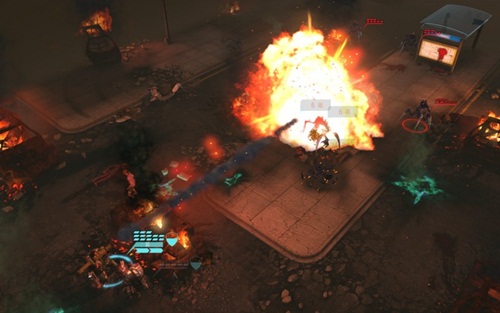 And rockets! Rockets cure all! Mwuahahaha! 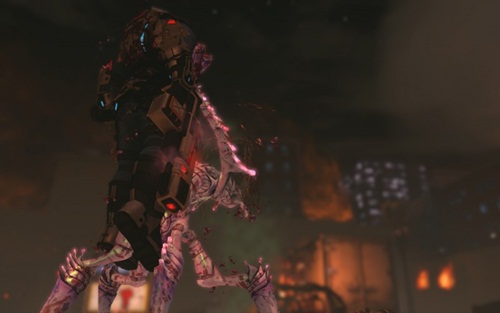 And, oh wait, that’s just an XCOM soldier getting murdered. Ignore that.

We throw our grenades and shoot our rockets at the big clump of crysalids, but they keep coming. Two XCOM soldiers are turned into zombies. Only two left, and boy I wish I was smart enough to have two extra soldiers on this mission.

The two zombies of XCOM soldiers are mowed down with laser and machine gun before they even have time to transform to crysalids. Yes!

The two remaining XCOM soldiers do the impossible. My team of elites couldn’t handle three crysalids. My team of rookies just handled seven. The rest of the team heals up, and it’s time to return to that base. Clearly, we have yet another must win. If everyone dies again it’s going to cost time and money to replace them again, and I’ll lose faith in my own abilities to lead  the team.

The new recruits have proven they’ve got guts. Now let’s hope the aliens don’t scatter them across the floor. 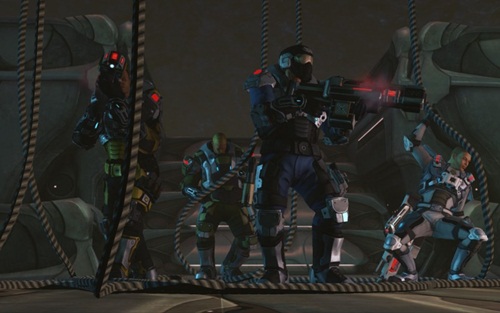 The obligatory badass entrance ruined by the sniper nearly falling on his butt.

The new team encounters a huge squad of mutons. They get through it without loosing anyone. Outstanding!

We get to the boss without a single casualty. This is going far too well.

They’ve encountered mutons and even crysalids and haven’t lost anyone. It’s going far too well.

We get to the boss, but this time I’m determined to capture him. The way I see it, he was a pushover last time so capturing him alive will be easy. Things stop going well.

Remember Davies? He was a rookie who proved himself by capturing XCOM’s first alien prisoner. Well, now he’s a lieutenant and he’s going to assist in capturing the sectoid commander. Davies doesn’t have a arc thrower, the item used for capturing, but he’ll move up one flank while a rookie with an arc thrower moves up the other. Another guy goes up the middle just to dance around cover and be a distraction for the sectoid commander. My sniper is cleverly placed on a raised platform where he can see EVERYONE.

My sniper shoots the rookie in the brain. Wait… what?

The sectoid commander has mind control powers, something I hadn’t seen before because I killed him so fast. He’s taken over my sniper, who just killed the only guy with an arc thrower. So, yeah, looks like we’re not capturing the sectoid commander after all. The sniper takes a shot at Davies as he closes in on the commander. The sniper misses.

The sectoid commander shoots Davies in the chest, but he survives just barely. Davies returns fire, and once again proves what he’s got by killing the sectoid commander in one volley. My sniper snaps out of it and apologizes for murdering a rookie. Everyone shrugs.

This time the mission ends. The new team has braved the crysalids and battled through the base and lived to tell about it. They’re the future of XCOM, and they’re due for a terribly defeat.